Easley Blackwood, Jr., a composer and pianist of remarkable accomplishment, died on January 22 at the age of 89. This word comes from the University of Chicago Music Department, where he taught for 39 years. Non-musicians today remember his father, Easley Blackwood, who developed the Blackwood Convention in bridge playing. Easley Jr., a graduate of Yale (‘53 and ‘54), was known early in his career as one of the most brilliant students ever of Nadia Boulanger; He studied with Messiaen, too, and on his return to America, he quickly made a national impact with his Symphony no. 1, a Koussevitzky Foundation commission, premiered and recorded by the Boston Symphony in 1958. (Reprinted on Cédille CDR 90000 016.) In the 1970s Blackwood was widely known as a superb pianist, specializing in twentieth-century music. One well-known recital program consisted of Ives’s “Concord” Sonata and Boulez’s Sonata no. 2, both played from memory, and at other times he played Schoenberg, Berg, and Webern (I heard a rumor, which I confidently believe still, that Blackwood learned the piano part of Pierrot Lunaire by ear from Steuermann’s recording before studying the score). 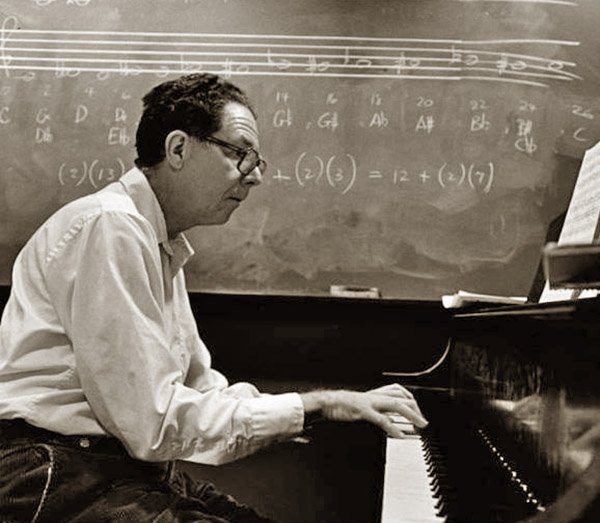 In those same years, up through the 1990s, Blackwood composed an abundance of piano and chamber music, and several more symphonies, mostly in a 19th-century chromatic and thoroughly tonal idiom; I remember harmonically exploratory piano pieces clearly with Chopin and Brahms in the background but with an unmistakably modern American color that is quite original. (Cédille CDR 90000 038; beautifully played by the composer.) His Cello Sonata (1985) includes Blackwood’s program note: “…in an idiom best described as ultra-conservative. Indeed, I have tried to approach, as nearly as possible, the style that I think Schubert would have discovered if he had lived until 1845.” Eccentric this may be, but well worth taking at face value (Cédille 90000 008). At another point in his career, Blackwood studied microtones and tonal tuning systems, and wrote a book about them (The Structure of Recognizable Diatonic Tunings, 1986).

Blackwood’s First Symphony, mentioned above, still strikes me (60 years after I first heard it live) as not only a striking achievement but a profoundly moving, really beautiful piece of music, one that I hope will be revived by the Boston Symphony and elsewhere. It shows an eclectic blend of Berg’s dense atonality, Hindemith’s heavy chromaticism (Blackwood did study with Hindemith at Yale), and a delicate infiltration of Parisian impressionism that seems unlikely but really works. And although relatively classical in form with a marked cyclical thematicity, this symphony is big — 32 minutes long in four movements, with a large orchestra: woodwinds by fours, brass 6-4-3-1, 4 timpani plus a timpano piccolo, the usual percussion plus one pair of antique cymbals, celesta, and a “very large complement” of strings. Only the first movement, Andante maestoso — Non troppo allegro ma con spirito, is really heavy, densely contrapuntal, with wide-ranging melody and several fff climaxes. The second movement, Andante comodo, is lighter, and more clearly tonal, almost to the point of sweetness. The Allegretto grotesco that follows is a conventionally laid-out scherzo but includes a set of mini-variations on a ground bass (I think he remembered Hindemith’s “Turandot” Scherzo from the Symphonic Metamorphosis), and ghostly orchestration. The fourth movement, Andante sostenuto, is long, quiet, and eloquent, very unlike a conventional symphony finale, and is based on a pair of distantly associated but quite tonal chords; one recognizes right away that their first appearance is shamelessly modeled on Act I scene 3 of Wozzeck, at the passage where Marie is “sunk in thought.” This chord pair recurs regularly until the very end of the symphony, when they fade away like the closing of the door at the end of The Planets.