Glenn Dicterow and Wendy Putnam, violins; Karen Dreyfus, viola; and Inbal Segev, cello chose several lesser-known gems for Sunday’s Concord Chamber Music Society at the Performing Arts Center of Concord Academy, opening with Mozart’s Duet for Two Violins, after the Piano Sonata in A Major. Musicians of the 18th and 19th centuries familiarized themselves with a wide range of repertoire through transcriptions and arrangements, but according to Steven Ledbetter’s printed notes, the unknown arranger took few liberties and produced a piece for two violins that is faithful to the original. The stateliness of the first movement is retained in the two-violin arrangement. Two variations were cut from the original score, while Variation 3, continual 16th notes in both parts, worked beautifully with the two violinists in attentive synchronicity. With ease they conveyed the energy and zest of the concluding Rondo all Turca.

CCMS continued with Beethoven’s String Trio op 9 no 1, one of the master’s early forays into writing for strings. The quartets would come later. The first movement, marked Allegro con brio, contains much that would be characteristic of Beethoven throughout his career. After a slow and stately introduction, the first movement becomes fun and games with offbeat accents, a jaunty secondary theme, and unexpected key changes. The atmosphere of the finale recapitulates the entertaining atmosphere of the first movement. It ends with the viola and violin dancing around various keys while the cello holds onto the dominant until the final rush to a fortissimo close in G major. The Adagio showcases a beautiful violin solo marked Cantabile, while the Scherzo is short and witty.

The string trio is an exacting genre. Absent the second violin of the string quartet, the instruments have to continually cover a range of color and sonorities. The three met this challenge, subtly alternating which instrument dominated, or exhibiting unity of sound as the music required.

After intermission, the entire ensemble took on Tenebrae for String Quartet by Osvaldo Golijov (b. 1960). Tenebrae, Latin for darkness, refers to a religious service of Western Christianity held during the three days preceding Easter and characterized by gradual extinguishing of candles. The piece opens with a shimmering tremolo in the viola and sustained notes in the cello. The violins enter on C and E with the score notations “a filament of light.” Throughout, Golijov acknowledges musical traditions that preceded him. For instance, he instructs the low strings at the outset to utilize “dynamic swells and bowing as in early music.” The cello’s movements recall the ground bass of the Baroque era. And the violins’ entrance recalls Air on a G string from Bach’s Third Orchestral Suite. The first several minutes bring to mind a primordial atmosphere mostly enveloped in darkness. By m. 45, the two violins trade a three-note motif. And from there some recognizable elements emerge. Speaking to precedent, the composer instructs at m. 83, “Arpeggiato in 32nd notes as in Bach’s Chaconne.” Beginning with m. 91 we see references to the natural world, “frogs at night”, “cosmic orbit.” The last section is entitled “Yrusalem” and directs the performers “like prayer fragments.” Tenebrae ends in a religious hymn.

So, how does a quartet make all this work? With intense concentration, and a focus on balance and blending of sounds. Each instrument displays its strengths—for instance, a dark and woody viola in its first solo (m. 73) —while never assuming too prominent a role. Dynamics hovered in the p range, swells felt contained, and sfzs sounded mellow in this masterful performance. 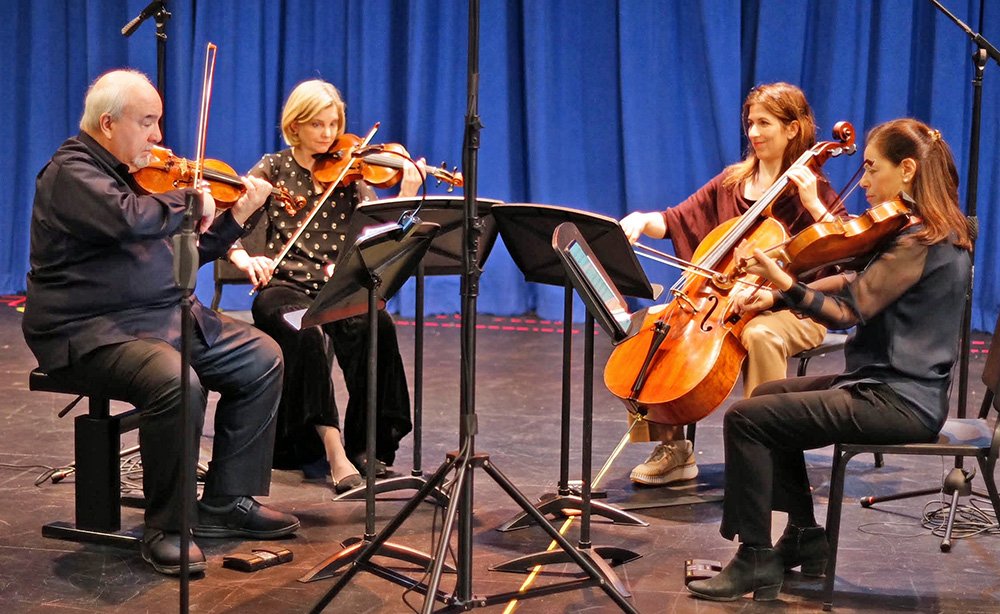 With Dicterow, Dreyfus and Segev on stage, the closer Jean Cras’s (1879-1932) Trio for Violin, Viola began with a repeated cello note on low a, followed by a rising, falling, then rising four measure motif in the viola and violin. The four measures repeat without change a second time. The movement has a freedom that is Cras’s own language. After an interlude of ten bars, the same motif reappears. Throughout the continual introduction of new ideas, the original motif remains more or less unaltered and present. Eschewing a Classical sonata structure Cras created a mosaic of variants from one or two germinal motifs. The variants’ individual characters were underscored by frequent tempo changes (un peu moins vite, vite, rit), ably conveyed by the performers. The cello never plays the main theme as a soloist, instead providing crucial rhythmic underpinning. Segev’s articulation and rich tone contributed to the trio’s ability to combine freedom with unity.

Movement two, with its seemingly unrelated sections, evidences the influence of Cras’s travels as a navy officer on his musical output. The first section is meditative, its 16 bars built from a mournful one bar motif. Dicterow’s virtuosity and assuredness through a long violin solo had the rubato and rhythmic elasticity necessary to evoke the Levant. Despite increasing exoticism, the opening motif is recognizable throughout.

Dreyfus joyfully conveyed the earthiness of eastern Europe in a long viola solo that opens movement three. A long section where all instruments are pizzicato came across with brightness and precision. The fourth movement, in continuous triplets, whirls by with short melodic references to the first movement. The piece ends victoriously and affirmatively on an A major chord. Throughout Cras’s entire composition the score often instructs one of the players to play “en dehors” or “un peu en dehors.” Meaning out front, or projecting the volume beyond the other instruments. Not a typical demand placed on a string ensemble, yet accomplished seamlessly by the threesome.

The audience expressed its delight with the enriching 100 minutes.