A single blue downlight defined the small arena in which the Junction Trio would contend with composers ancient and modern as well as our expectations for concert decorum, on an otherwise dark Jordan Hall stage on a glowering Saturday night. “Given that live performance is the beating heart of why Celebrity Series exists, we’re always interested in how the experience of live performance is evolving. The key, as always, is to enhance and augment, not to distract, while being open to what form those enhancements might take,” Celebrity Series CEO Gary Dunning told this writer after the concert. Over the couple of hours of music making, lighting designer/board operator Anne Dresbach keyed us to mood with color morphing from the single central instrument, cookie projections of labyrinthine patterns, and well-aimed general lighting. The completely dark house added to the mysterious suspension of time and place, but made note reading and note taking near impossibilities. On the whole we applaud such attempt to avoid the quotidian.

And further to the enhancement and rejuvenation of the concert experience, JCT had planned to begin the second half with its own arrangement of numbers from Gesualdo’s breathtakingly and cosmically chromatic Tenebrae Responsoria (1611) leading attaca into the Schumann Piano Trio in D Minor op. 63, but post-handout publication, they decided that plan would result in disaster. Instead cellist Jay Campbell explained that his arrangement of Thomas Morley’s wittily instructive song “Christes Crosse” from his “Plaine and Easie Intruduction to Practicall Musicke of 1597” better served to connect with Schumann’s energetic and passionate favorite. Campbell left it up to the crowd whether to interrupt with applause or to allow the Schumann to proceed without pause.

Morley set the vocal line with two instrumental parts to serve as accompaniment, with the performers expected to realize some interesting figurations. Conrad Tao’s piano part (in Campbell’s transcription*) started out straightforwardly but repeated in double, triple, and quadruple meters, daring the stars to align. “Stephan [Jackiw] (playing the vocal line) will go his own way as he always does,” opined Campbell, and indeed the number did feel in the moment and improvisatory—almost well-ordered.

The audience, deciding that JCT had made a good choice, remained silent at the close of the number, allowing the Schumann to commence with inevitability. 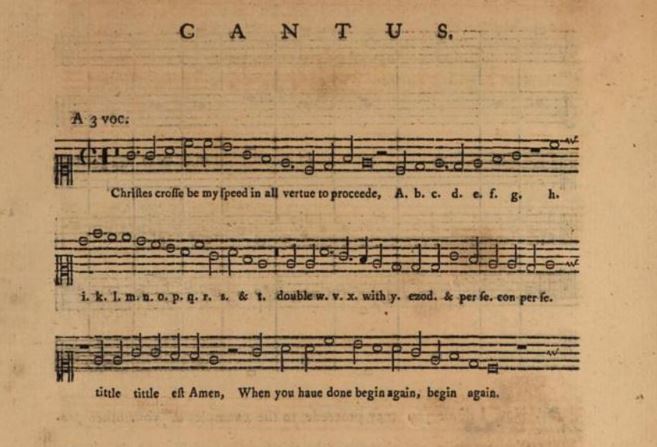 In the interest of freshening the concert experience, JCT might have projected the words in faster and faster swirls:

But they also might have looked backwards into the 19th-century practice of breaking up movements and thus preserved the Gesualdo. How about:

The conjoined players, individually virtuosic, elegant, poetic, bel canto, and fierce, came up to Celebrity Series expectations in every respect, adding their names to the rosters of celebrity trios such as the Cortot-Thibaud-Casals, Ax-Kavakos-Ma, The Beaux Arts, Istomin-Stern-Rose. The young Junction Trio also brings an appealing stage manner, a determination to shatter confining molds, and shared infectious joy in music making.

The concert had begun with the east-coast premiere of Amy Williams’s Bells and Whistles, co-commissioned by Boston Celebrity Series. The composer noted that

The term “bells and whistles” comes from the fairground organ and also from early 20th-century “master” clocks, which could operate different clocks throughout a factory or school to ring bells or blow whistles. These sonic images are combined with other types of bells (fire alarms, train whistles, bell towers, cuckoo clocks, anvils). The piece is in three continuous sections—the first is focused on clocks (mechanical, ticking sounds), the second on (fast, driving) trains, and the third on (ringing, accumulating) bells.

Despite the possible digression into the enslavement of clocks and factory workers, the opener avoided overt messaging such as the rumpling of single use garbage bags in Tao’s politically correct Piano Trio No. 2 heard in Rockport Music’s 2019 summer season…though Tao’s reaching into the piano at the beginning of Bells and Whistles left us expecting the worst.

The first movement [had in 2021] opened with over a minute of Tao crumpling and stretching a plastic bag—and nothing else. Indeed, much of the movement seemed to be an attempt to expand the limits of what constitutes music with frequent resort to sound effects more than musical tone and recognizable phrases. Tao’s holding the bag while playing had no perceptible musical effect but seemed merely a visual gimmick. (Geoff Wieting)

If Tao mastered lots of loud and fast ostinatos, Jackiw and Campbell hardly acted like enslaved persons in their scrapings, con legnos and pizzes; in fact the three players apparently acted quite independently of one another, as they rose to accumulated episodic outbursts. Later string harmonics whispered quiet impressionism (in which the blue light felt particularly apt) while the backgrounded piano threatened with double-speed riffs before fading into the mists…not quite soon enough.

Ravel’s A Minor Piano Trio, a staple of the repertoire, followed without any programmatic inevitability, though we certainly received it with gratitude. The players saturated Jordan Hall with the gorgeous singing tone we knew they possessed. Of course they mastered Ravel’s mood swings, coloristic effects, jazzy rhythms, sophisticated atavisms, harmonic shifts, and haunting melodic reveries. Listeners in 1913 must have wondered whether they or the composer had departed from their senses. Today we can take delight.

The publisher gives himself permission to close this review with Geoff Wieting’s excellent account of the work and the Junction Trio’s equally memorable traversal from Rockport in 2021.

Ravel’s Piano Trio of 1913 also must have been considered outré by many at the time, but though the composer did use uncommon nomenclature in the Pantoum and Passacaille middle movements, these are essentially variations on traditional tropes; moreover, though his harmonies ranged well beyond those of the still-active Fauré, Widor, and Saint-Saëns, they sound tame compared to the idiom of Stravinsky’s Le sacre du printemps, from the same year. The musicians instilled the Modéré first movement with the gentle melancholy so common in Ravel’s oeuvre but with a special refinement in this piece. The movement’s climaxes had all the thrust and power needed, but the more lyrical and graceful moments—rolled piano chords and string glissandi—most beguiled my ears. At the conclusion, the beautiful distant echo of the first theme, now in the relative major, was deeply affecting in its simplicity.

A pantoum is a Malay verse form of four-line stanzas, but Ravel adapts it to music in the second movement by intertwining two main themes throughout as he builds it into a virtuosic scherzo, not of the joking kind but rather a surging tsunami of exhilaration. Nevertheless, the relentless energy shouldn’t preclude the crisp execution of a telling detail such as the triplets in the second main theme, as sometimes happened. Still, the verve and power of this traversal overwhelmed without sacrificing balance among the instruments, and the performance left the audience noticeably gasping at the ending—in a good way!

For me the profoundly expressive apex of the concert came in the Passacaille third movement. This, too, is not a term one expects to encounter in chamber music as it is most commonly associated with solo organ literature (using the more common Italian term, passacaglia), denoting a set of variations constructed on a ground bass. Given the egalitarianism of chamber music, Ravel naturally has the fundamental tune migrate through all parts of the texture over the course of the movement. The artists carefully built a great arch, beginning in the depths of the solo piano’s bass, incrementally bringing it to a mighty climax that seemed to shake the hall, then with equal care descending gradually from the peak. Nearing the movement’s end, the muted string duet, virtually without vibrato, and the final recurrence of the piano’s low-bass solo were starkly beautiful and moving, each giving a foretaste of Ravel’s style dépouillée (stripped-down style) heard in so many of his works from the 1920s.

After the profound splendors of the Passacaille, the airy delicacy of the Final quickly lifted us back above earth’s surface . . . though not all was lightness. Ravel makes perhaps his only oblique reference to the encroaching horror of World War I in the fanfare figures in triads assigned to the piano. These could have been much more martial and brassier; Tao’s over-generous pedaling here impeded the French ideals of clarity and crisp brilliance. However, with the arrival of the chordal climax in the piano, topped by scintillating string trills, joy triumphs, and the threesome’s unforced power and virtuosity again inspired awe as Ravel’s great work came to a ringing conclusion

*Charles Wuorinen also rose to the challenging of arranging this famous Morley song and helpfully described his chore:

CHRISTES CROSSE is a setting for soprano and piano of a singing exercise found in Thomas Morley’s PLAINE AND EASIE INTRODUCTION TO PRACTICALL MUSICKE of 1597. In the original a simple cantus floats above two lower parts which become increasingly complex and active as the piece unfolds. In my version these parts are transferred to the piano, with considerable alterations effected mainly through registral change. This amplifies the already slightly hysterical quality of the original. -CW, May 1998

Why does no one perform Morely’s choice madrigals anymore? We once loved to sing: April is in My Mistress’s Face, Now is the Month of Maying, Fire Fire My Heart, O Mistress Mine…

Comments Off on Celebrating New Celebrities