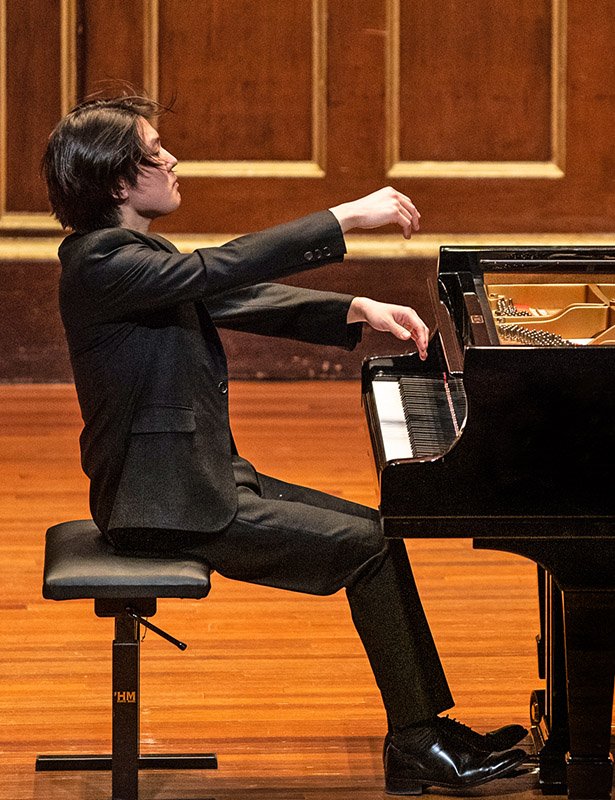 A near capacity Jordan Hall audience of December 2022 might at the first glance resemble the freewheeling days of 2019. Squint a tiny bit, though, and you notice serious contrasts: numerous face masks and a level of seriousness defining a team on a mission. Then the music starts and another change becomes obvious: an uncanny, post-Covid cough-less stillness obtains.

Pianist Seong-Jin Cho, familiar to BSO and Tanglewood audiences, returned to Boston on December 11th for a Celebrity Series recital built around mighty variation suites by Brahms and Schumann. Clever programming relied on Handel Suites No, 2 in F Major and No. 8 in F Minor as openers for Brahms’s Handel Variations. In giving the F Major’s beginning Adagio a somewhat understated interpretation without losing perfect articulation, Cho set exactly the right mood. With remarkably clear voicing and subtle tempo variations, he delivered the sequence of slow and fast pieces as a single musical narrative spanning both suites until culminating a suitably frantic Gigue.

Brahms’s op. 24 Variations never failed to impress with structural or contrapuntal inventiveness, but the Korean virtuoso highlighted another dimension as well. In this concert, they underwent something akin to a Dorothy-in-Oz transformation. Departing from the Handelian Aria and first Variation, through the Schumannesque charm of the Animato and Dolce variations, this journey rapidly took the listener downward to gloomy chthonic colors of Variation No. 6 and continued the illuminating colorations into the clear blue skies of Dolce-Soave. Further in the travelogue, the G-minor variation elicited a barcarolle in grey tones, swiftly morphing into the sweet pastoral hues of number 22. There followed an energetic and somewhat militant build up to the finale and the fugue itself, offering a homecoming after a whirlwind of diverse impressions.

Four of Brahms’s eight opus 76 Klavierstücke opened the second half. I prefer to hear each of his late piano pieces completely separately — with a cool-down and a rest, but Cho didn’t break between or afterwards and launched into Schumann’s Symphonic Etudes without a pause, using Brahms as a fairly effective springboard. Here again Cho’s remarkable concentration kept the audience in thrall, while he delivered surprises and feasts of color. The Theme and the first Etude emerged from the inherited Brahmsian mood with ruminating broad tempi, and then in the second Etude, Andante, not only the soaring melodic lines captivated the ear, but the stormy seas in the left hand also broke out in a distinct voice of their own. Through the build-up that followed, tempi breathed and varied freely, maintaining a single and captivating narrative line. Along with the standard set, Cho programmed two of the Posthumous Etudes — Allegretto and Moderato — and orchestrated vast emotional swings, after which the bravura Finale felt like a true catharsis, and the public responded very enthusiosatically.

The first encore, Handel’s soothing minuet from the first piano suite calmed down the audience a bit, but still left it hungry for more. Cho obliged and delivered a great shot of adrenaline with a gloriously over-the-top jaunt through Chopin’s opus 53 Polonaise, likely a permanent piece in his repertoire ever since the days of his victory in the Chopin competition of 2015. The audience responded with a deep-chested roar, as the energy, earlier suppressed in hypnotized stillness, emerged after this Romantic tour-de-force.

Victor Khatutsky is a software developer who reviewed music as a US-based freelancer for the Kommersant Daily of Moscow. He has been known for occasionally traveling long distances to catch his favorite performers.