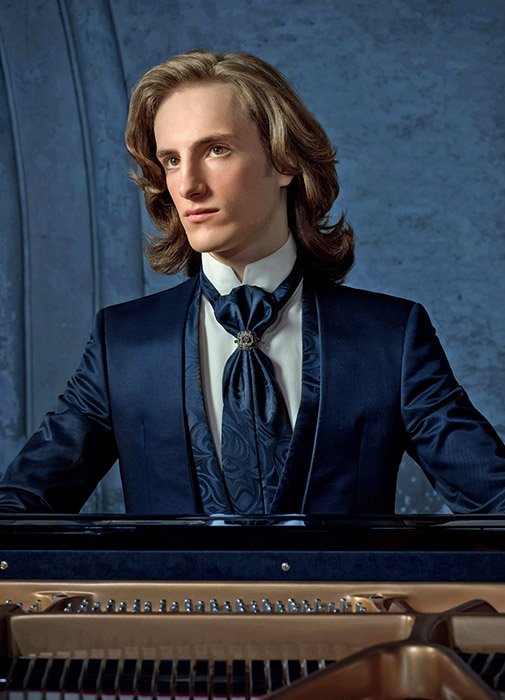 The 19-year-old rising, former wunderkind Israeli pianist Yoav Levanon presided Saturday night at a benefit recital on behalf of the American Friends of the Israeli Philharmonic*, an institution dating back to its 1933 debut of emigrees under Toscanini. Levanon, a Warner Classics artist who is already busy with recitals and concertos in Europe and America, delivered his 40-minute bouquet of favorites, “Rhapsody to Rhapsody” before a rapt audience of about 75 in the banqueting hall of Temple Kehilath Israel in Brookline.

Having listened to some of his recordings of Chopin, Mendelssohn, and Schuman prior to the concert—in which he showed tremendous clarity, subtlety, and control—I was excited to hear Levanon. While these traits didn’t consistently shine through in yesterday’s performance, definite moments of true genius emerged, and I’ll be following the evolution of his career with interest.

The opener, Liszt’s Hungarian Rhapsody No. 2 (yes, that Hungarian Rhapsody), serendipitously included a cadenza by Rachmaninoff. While the Liszt itself has of course been played to death—and indeed, this performance had perfunctory elements—the cadenza, with Rachmaninoff’s more advanced harmonic structures, added sudden and welcome opportunities for rhythmic, and interpretive freedom. The distinctively Rachmaninoff sounds encouraged Levanon to make the piece his own.

The Chopin G Minor Ballade, which Levanon noted was Schumann’s favorite Chopin work, was my favorite of the set and seemed most suited to his style. The intro was almost comically elongated—“almost,” because he somehow made it work. It’s not often that performers adhere to the true definition of rubato; usually, they slow down and then continue at the standard tempo. Levanon actually caught up! Even during what felt like the most self-indulgent, drawn-out tangents in which one worried that forward progress would halt, he always returned the borrowed time.

From the beginning, the Rachmaninoff E-flat Minor Etude came across as somewhat uncontrolled. Sure, it contains elements of neuroticism, and it’s a valid artistic choice to pursue an unhinged sound at times, but one still needs to keep it together enough to convey something coherent on timescales longer than a single phrase. For instance, during the return of the initial theme—this time in the bass with the triplet chord figurations on top—the melody sank in a pedal-puddle of mud. To be fair, though, the muddiness of the Boston/Kawai baby grand’s bass registers and piercing, wooden treble deserved some of the blame. Could he have compensated more or was the instrument beyond redemption?

The printed program ended with a solo piano arrangement (arranger unidentified) of Gershwin’s Rhapsody in Blue. (Hence “Rhapsody to Rhapsody.”) While he seemed very much at home with the piece and performed with markedly more assertiveness and clarity than in the Rachmaninoff, he didn’t quite find the expected lilt or sufficiently savor the bluesyness.

After joking that he wouldn’t keep leaving the room for curtain calls and making the audience beg “because we’re adults here,” the confident and charming Franz Liszt epigone Levanon needed no cajoling before ending with three encores. The Rachmaninoff D Minor Etude began with dreamy delicacy and I wish I didn’t have to mention again that the climax descended into mud again—again, I think it was the piano. Before his very short and un-named second encore (Scriabin Album Leaf op. 45 no. 1), he quipped that the value of things doesn’t have to be measured in length. Levanon’s last notes rang out in Liszt’s La Campanella, unfortunately suffering much from the piano’s ear-splitting treble and messy bass. When the music confined itself to close registers, such as at the beginning, the articulation of repeated notes, spoke spot-on and crystal clear, so the subsequent devolution into mud seemed decidedly the fault of the instrument. If you experienced disappointment at the concert, do yourself a favor and allow Levanon’s excellent recording HERE to redeem him.

Currently active in the San Francisco finance world after having received a BS in mathematics and physics, and a BFA in music in 2012, Nathaniel Eiseman designed this site in 2008.