Against the backdrop of a perfectly fair sky and a reposeful ocean, Angela Hewitt led the Orpheus Chamber Orchestra in a profoundly moving reading of a selection of Bach’s keyboard concertos on Saturday afternoon in the beautiful, sold-out Shalin Liu Performance Center at Rockport. Prior to the concert, two members of Orpheus, Abi Fayette and Renée Jolles, joined Hewitt on stage for a lively lecture/conversation animated by Barry Shiffman, Classical Artistic Director of Rockport Music. Hewitt conveyed the importance of ballet and singing in her artistic formation, and explained that she had given her own annotated parts to Orpheus, inviting them in effect to share in her own lifelong exploration of Bach’s music. As a result, each of the five works emerged with a marvelous singularity, unlocking a distinct meaning and experience. Through a personal selection and subtle order of presentation, Hewitt accentuated the astonishing variety of Bach’s keyboard concertos. He often composed these, as we know, out of re-used bits and pieces, both sacred and secular, for afternoon entertainments at Zimmerman’s Kaffeehaus in Leipzig. The cumulative effect of Hewitt’s work with Orpheus resurrected the “there and then” of the Kaffeehaus into a transcendent and infinitely grounded here and now. Comfort and pain, joy and anguish, body and soul, emerged anew, in a masterfully recalibrated, sweeping affirmation of life—dissonances and all.

From the opening allegro of Concerto No. 4 in A Major, I was struck not only by the lively tempo, but also by how well the violins called and responded to Hewitt’s elegant light touch, creating a vivid feeling of daybreak penetrating every recess of the soul and ending in lovely unison. Hewitt imbued the cantata-like larghetto with a prayerful reverence, but she brought it to a new level by fusing dance and song, blurring the boundary between “cantabile” and “danzabile,” restoring us to an embodied present through visceral spirituality, or spiritual viscerality.  The sweeping third movement emerged as a mature, diurnal minuet enlivened by subtle episodes of scattered light and a wonderfully effective “stepping on each other’s toes” phrasing that excited and delighted. 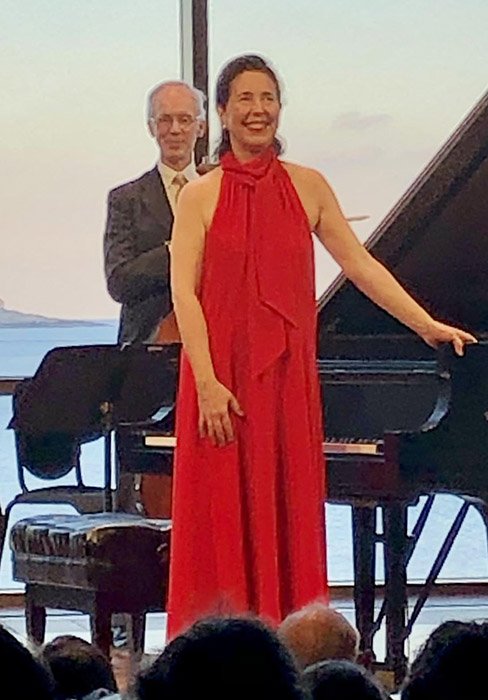 In contrast, Concerto No. 2 in E Major began in medias res with an energetic invitation to rise up out of inertia, passivity, and despondency to overcome shadows and doubts. Find your inner resolve! Nicely expressive violins with rich, even voluptuous sound, bolstered Hewitt’s keyboard in a joyful dance, countering threats of darkness without denying their power. Indeed the second movement, again cantata-like but also gestural and balletic, took on the character of a lamentation allowing the soul to recognize, but also let go of, its intimate pain. Through exceptionally subtle phrasing and a masterful intellectual patience, Hewitt found a lofty path, which concluded in a celestial union with the orchestra. The final allegro reveled in the heart’s elation and return to conviviality. Implicitly, once the private personal soul is purged of suffering, we can reconnect with one another and join the dance that grounds us.

Concerto No. 5 in F Minor further tested our capacity for inner resolve through a remarkable contrast between Hewitt’s fragile, vulnerable tones and a decidedly somber orchestra. Powerful crescendos evoking Fate reminded us that holding our ground against surging anxiety sometimes constitutes heroism. In this context, the ensuing Largo soared with overwhelming emotion, pleading to heaven and humanity to revive and bolster our Trust.

Exploiting how Bach pays tribute to his friend Telemann in this movement, Hewitt and Orpheus emphasized the many sources through which grace comes to us, stays with us and circulates among us. The bold quality they found for the final presto movement at times rivaled Bartok in musical audacity. Thanks to dynamics and phrasing, dance and community, joy and shared listening subverted Fate.

The “triple concerto” for flute, violin and keyboard welcomed us back into revelry after intermission, as Abi Fayette (violin) and Anthony Trionfo (flute) joined Hewitt on center stage. The opening allegro struck me as deliberate and solid, but also inquisitive and complex. Strong statements and emphatic accents surging from pizzicato strings inflected Trionfo’s soaring flute and Hewitt’s bright downward rippling into appeasing habitations, where dance and song become possible again. In the adagio ma non tanto e dolce, Fayette’s lyrical violin, Hewitt’s light keyboard and Trionfo’s rapturous flute guided us into “pastures” through a loving trialogue strewn with joyful shards. Violas now led the concluding Alla breve with a melancholy theme that soon turned dramatic and turbulent through beautifully emphatic and abrupt string phrasing. When the keyboard returned after listening to the orchestra’s tumult, Hewitt insisted with relentless confidence on the power of joy to stabilize our courage and foster vitality. The overall experience was emotionally charged but contained—aesthetically thrilling as a Brandenburg concerto but more saturated with affect and range.

Concerto No. 7 in G Minor closed the afternoon as though its recondite meaning had made itself newly accessible. Hewitt and Orpheus gave a dramatic, urgent character to the opening allegro, propelling it swiftly forward through fitful winds of bright color, conveying the elusive activity/passivity of our immersion in the flow of time and the porous inconstancy of place. We are “There and Then” even as we are “Here and Now,” but also already always dislodged and gone. The plaintive andante both sang and danced our predicament thanks to Hewitt’s elegant, crystalline embellishments and pleading, tinged with regret over “all that must be left unsaid,” leading us towards the Sublime. Hewitt then exploited the ambivalent tempo of the concluding allegro assai through bold phrasing and caesura to move in and out of the familiar, marrying suspense with recognition. Her stunningly dense contrapuntal dance full of entanglement unfolded as a joyous but fateful gigue that lifted us to ethereal realms of joy by grounding us in the poetics of place . . . safely suspended within earth, sky, ocean, and time. In Hewitt’s reading, Bach tells us to love Life because it is the only dance there is, dissonances and all. But the interpretative key, as her choice of encore emphasized, is how Bach brings this healing about. That largo of Concerto 5 in F Minor again reminded us how deeply we had been affected, here, now, then, and there.