Boston Opera Collaborative emerged from the recent plague with an interestingly staged mashup of Schumann’s Dichterliebe and a BOC-commissioned song cycle “about love” from ten poets and eight composers based on their responses to Schumann’s music and Heine’s poetry. Love in the Time of… debuted last night at the Cambridge Multicultural Arts Center.

Stage Director and co-Artistic Director Patricia-Maria Weinmann had conceived the show for Zooming during the company’s Covid quarantine, but having discovered how the narrative power of the imagined interactions between the poet Harry and his beloved Clara (think Henrich Heine and Clara Schumann?), and between the 19th– and 21st-century composers and poets seemingly burst the confines of laptop screens, she decided to hold the production for such time as live performance became possible.

Andy Nice set the stage with eclectic groupings of thrift-shop tables, chairs, and dressers, in front of translucent draperies onto which Kathy Wittman’s images of flowers and trees (with some water and snow) moved and morphed when they weren’t washed out by Talia Elise’s well-plotted lighting, which served to underline emotions and direct our eyes to the feelings of the three singing Doppelgängers or alter egos, who generally stood and sang, but sometimes interacted with the always-present Dichter.

Tenor Omar Najmi engaged completely in the role of the artfully thwarted lover while giving an entirely convincing performance of Dichterliebe. His stage business of scribbling poems, gazing skyward for inspiration, and telegraphing both love and angst, felt completely integral to Heine’s narrative thrust. He projected excellent German with well-colored tones—at times intimate in the best art-song manner—at times more operatically heroic as appropriate to the staged version. The very rangy part took him up to some glorious high As. His compleat partner at the piano Jean Anderson totally collaborated in the drama and made much of her extended postludes and introductions. The lid was open, and with the big voices on the stage, she never needed to withdraw into the background.

Anderson’s interpretation of the 16 new songs somehow managed to glue together the very distinctive styles. In making the commissions, Weinmann had not only given each poet and composer a poem and song from which to take inspiration, but she also assigned a vocal range for each example, so that she could intersperse the contributions from the three supporting singers into her mise-en-scene.

“Im wunderschönen Monat Mai” begins Dichterliebe and began the show as what might have been a Lieder recital in a drawing room, with the tenor in non-descript deshabille. He could have gone on and completed the cycle conventionally, but the cyclus interruptus pattern began with two new songs. These and the subsequent 14 responded variously to the old—texturally and musically. Some poets wrote of love—both thwarted and exalted. Nature too figured in the musings. Some composers quoted Schumann directly while others transmitted musical thoughts without obvious connection. We heard what amounted to spirituals, as well as jazzy stride, and angular parlando. Kitty Brazelton’s direct musical quotations in “In the Gathering” clearly anticipated “Ich grolle nicht,” while in the penultimate number “Detritus,” composer Manuel Rodriguez, quoted Schumann’s opening song about May, while the poet Karen Mandel wrote:

I scooped up handfuls of matter,
tugging them out of my heart,
piling them in the suitcase.
They weren’t heavy.
Just weighty.

The suitcase seemed to evoke the coffin in the Dichterliebe closer (uncredited program translation):

Let’s bury the old, angry songs and dreams.
Let us bury them—get a huge coffin.
I will put in it many things, but won’t say yet what goes in.
The coffin has to be larger than the hugest wine vat.

Or in Richard Clarke’s more poetic translation (which we prefer):

Therein shall I lay many a thing,
but I will not yet say what;
the coffin must be even larger,
than Heidelberg’s huge vat.

Your history, only a small drop in the eons of our existence, a strong hold we align and break free from prisons of colonization. Wovoka’s prophecy of hearts buried at Wounded Knee seeds the tree of life, strengthened by Mother Earth.

Was Whiteman thinking about Heine’s late writings for his cousin Karl Marx?

The first among the four supporting singers, soprano Gabrielle Clutter has a big, bright voice with ringing high notes and the ability to diminish beautifully. As Clara she showed great chemistry with poet-lead singer Harry at first, and cold rejections at the end. Her mobile facial expressions held our attention. Her vibrato felt overwrought in the intimate surroundings, but we learned that she felt a bit indisposed.

Three “Ancient Spirits” put across their new songs with great individual success and collectively in a unison trio at the end. Baritone Junhan Choi, familiar to BMInt readers, possesses a pleasingly liquid baritone and shows a mature, calm attitude on stage. Sarah Cooper’s soprano came across with warmth, security, and appropriate attitude. The tall and distinctive-looking mezzo-soprano Alexis Peart impressed us with great pipes and a diva manner that recalled both Shirley Verret in commitment and Jessye Norman in command. We’d like to hear more from her.

In replaying the show we might discover more connections between old and new, but even absent such further gleanings, we found Weinmann’s illumination of Dichterliebe to be a success, especially on its own terms. The decision to stage concert or church vocal music is not so rare. Messiah worked very well in a modern opera staging HERE. I’ve seen a Matthew Passion ballet. Peter Sellars famously staged Bach’s Mein Herze schwimmt in Blut.  Does anyone else remember the Boston Shakespeare Company production of Schubert’s Winterreise in which the tenor began from the back of the house to approach a nude woman on stage only to reverse himself at the midpoint and intone Drei Nebensonnen while exiting the house? 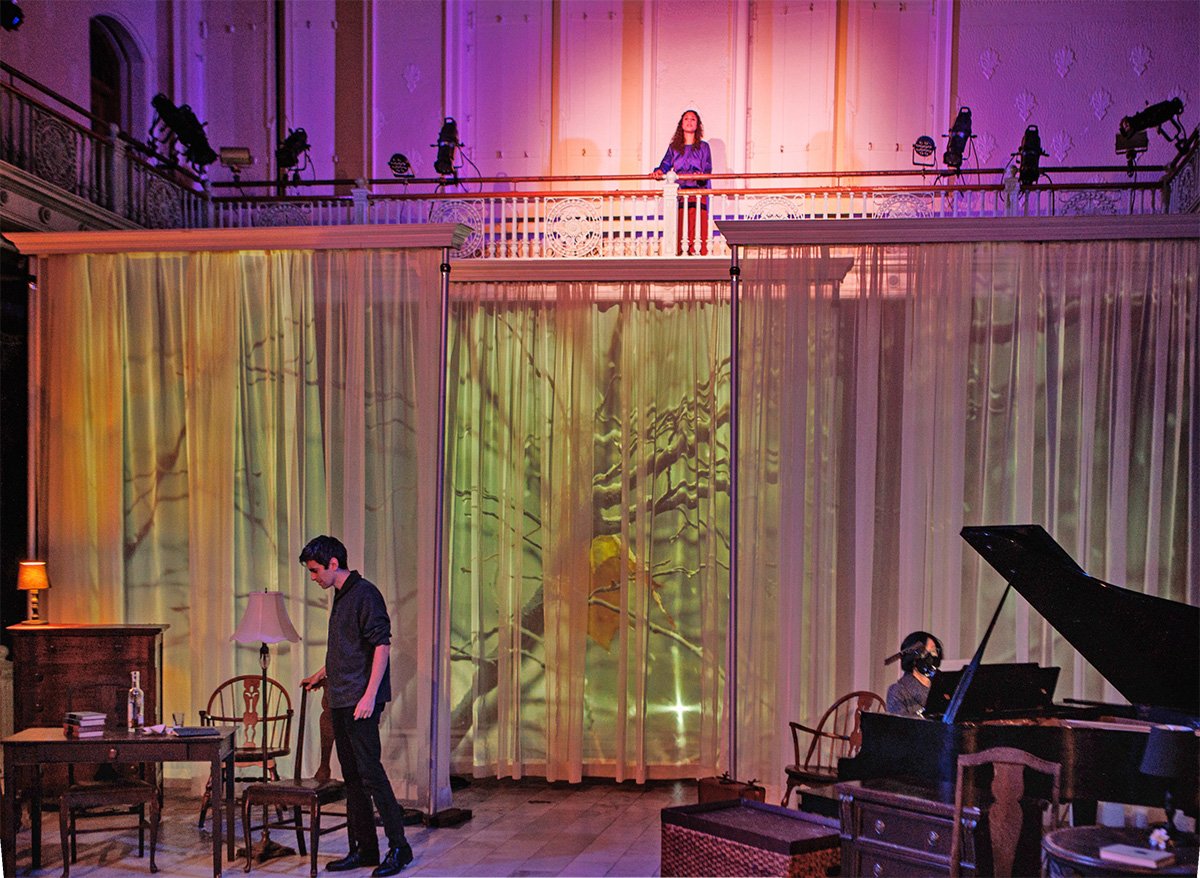 Above: Omar Najmi as Harry contemplates taking a dram or picking up his notebook while Sarah Cooper sings.
Below left Alexis Paert, Below right Omar Najmi and Junhan Choi 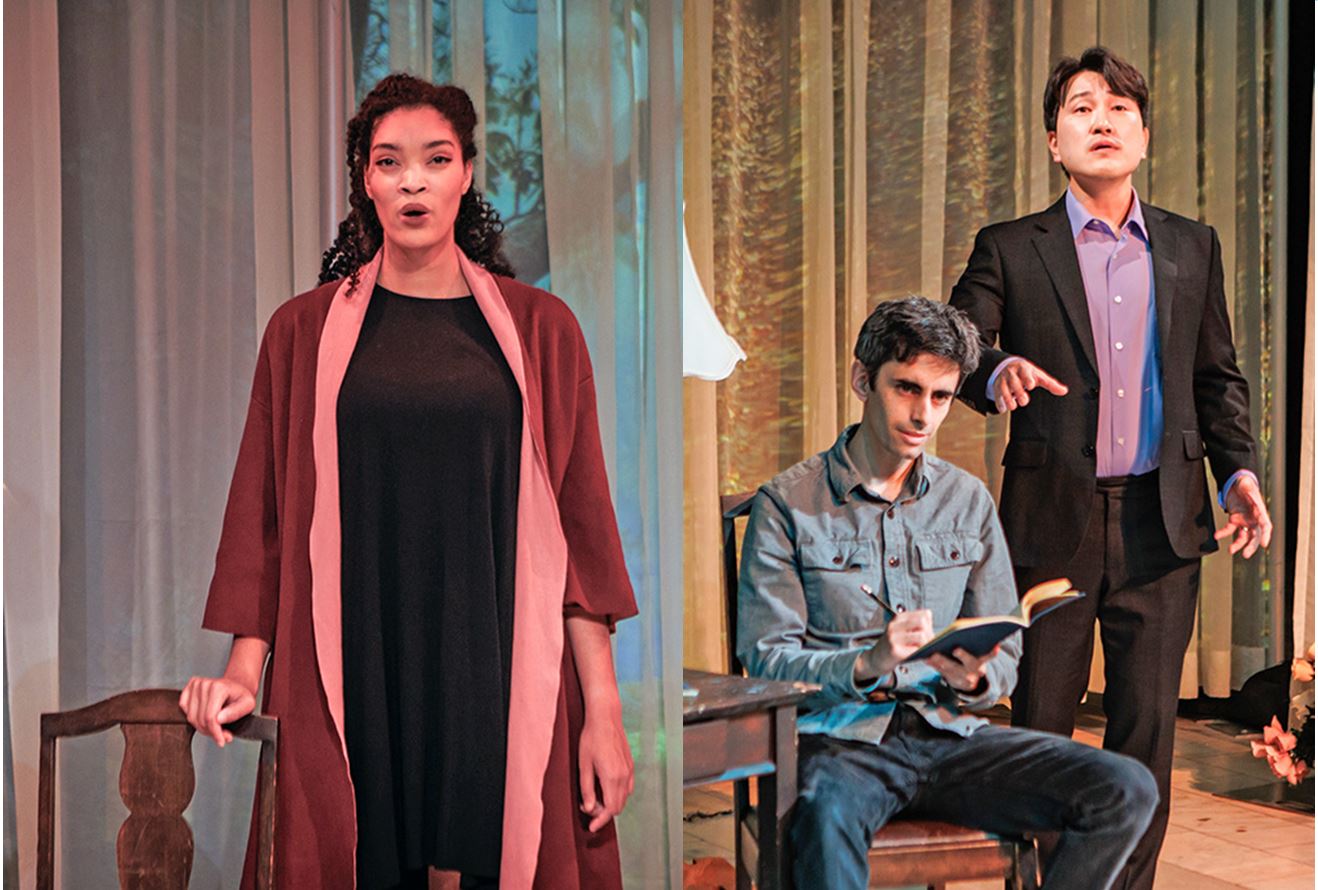