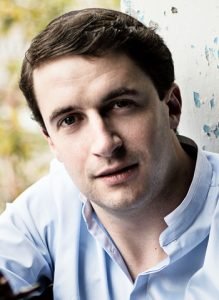 American-born violinist Noah Bendix-Balgley, the Berliner Philharmoniker’s principal concertmaster, will be featured soloist in Mozart’s Violin Concerto no. 1 when the orchestra appears at Symphony Hall on behalf of the Boston Celebrity Series Boston on November 13th at 8:00 [Tickets]. Joel Cohen, music director emeritus of the Boston Camerata and an occasional contributor to this publication, recently had an online, Boston-to Berlin chat with this gifted performer. A lightly edited transcript of their conversation follows.

J.C: Welcome to Boston, Noah Bendix-Balgley. Are you in fact the first American concert master of the Berliner Philharmoniker?

NBB: Yes, as far as I know. Of course, the orchestra is very international, and there are a number of Americans currently serving. [Note: The Berliner press office identifies five American-born musicians on the roster]

In any case you are a pioneer in that sense. My impression is that English is one of the working languages of the orchestra.

Your star has risen very quickly, and deservedly so. You are from the American South, right?

Well, I was born in Asheville, North Carolina, a beautiful town, but we moved around a lot. Then I ended up studying at the Jacobs School of Music at Indiana University, studying from the age of 13 with Maurizio Fuchs, who is still there on the faculty. I did graduate studies in Germany for about five years, and my performing career got underway in that country. Then I got the position of concertmaster with the Pittsburgh Symphony, where I stayed for several years.

Did you grow up in an intensely musical environment?

My parents were not musicians, but they loved music, so there was classical music on the radio, and plenty of records, including ones by the Berlin Philharmonic under Karajan. And, since my dad is a teacher of Eastern European folk dance, there was lots of folk music also. My dad in his youth went to Eastern Europe collecting and learning dances: Greek, Yugoslav, Yiddish. I love that music.

My parents were very supportive of my violin playing and helped me get access to the best teachers. They never pressured me, however. They trusted me to follow through with my passion as I wished.

Well, it’s clear that you had this gift for violin playing. And you were doing soloist competitions, and so forth. Then at some point you decide that you want to be in an orchestra.

I was doing these competitions, and learning from them, and winning some prizes, but at some point round the age of 25 I felt I had gotten what wasvthere for me from that world. I’ve always loved making music with others — chamber music, orchestral — and then, out of the blue, in 2010, I got an offer to try out for the first chair in Pittsburgh. Playing with a top-level orchestra like that is a terrific learning experience, and I go so much out of it. I loved providing leadership, but also taking in cues from everybody else, making it all work out in the best possible way.

Right now I have a very varied musical life. I’m working with a fantastic orchestra and conductor, but I also get to play in my own chamber groups and play concerti with other orchestras. In this, I’m like many other orchestra members, who play chamber music, conduct, lead soloist careers, teach.

The fact that orchestra members are constantly challenging themselves contributes to a great working environment. Every chair has two principals: two first flutes, two first oboes, et cetera. And for concertmaster there are three. This allows for flexibility, and for future planning. There are orchestra members in charge of the planning, and it’s a democratic process. Hiring, tenure, even the choice of music director, are all decided by democratic vote. Not that it’s always easy, or simple, but it does mean than we are collectively responsible for the orchestra’s path.

You have a deep bench in the string section. You are the captain, but there are other strong personalities working beside you. Do others contribute ideas about bowing, phrasing, and so forth?

Yes, there are different ideas to be brought into balance, in a good way.

This goes beyond your skill as an instrument player, no? Isn’t there a personal element?

Yes, there are definitely personal skills required. As a successful colleague of mine advised, it’s often best to make musical thoughts clear by just playing, instead of through speech. Clarity in all directions needs to be maintained, and information must be shared, but without bringing the rehearsals to a halt. Over time, I’ve managed to learn something about doing all this.

Is there a conflict between keeping up your soloist skills and your orchestral duties?

In any case, the job keeps me in shape. The repertoire is so varied, and then there are some weeks when I am off playing chamber music, or a concerto. There is never a moment when you can let your guard down.

And of course, there is the moment when you can step in front of the orchestra and play a concerto. That’s a different kind of challenge.

A propos, you are going to be soloist in a Mozart concerto here in Boston. Aside from your personal qualities — the sweetness and smoothness of your sound, for example — have you been influenced by the recent evolutions in style spearheaded by the historical performance movement?

Certainly, I am influenced by everything I hear. I studied for several years in Munich with Christoph Poppen, who has performed a lot of Bach. I want to balance all that I have learned in that area with my ideal of violin sound, warm and full, including vibrato. And then, I’m not performing with a baroque ensemble, but with the Berlin Philharmonic. We have indeed performed with period specialists, but in the end our character of sound is more of the vigorous variety rather than the lean.

So what are some of the salient characteristics of this first one?

The key, first of all, B-flat major is not particularly comfortable for the strings, but I always think of it as a particularly warm key. Mozart had been traveling in Italy and had been inspired by the Italian concerto tradition of the moment. So there is that sort of elegance. Some of the music prefigures things in his music ten or 15 years forward, such as the dramatic passages in the development section of the first movement. The long lines in the second movement are unique to Mozart; they appear to be weightless. The violin is singing, very simple melodies but so beautifully proportioned. The challenge is not to screw up Mozart’s perfection.

So that brings us back to this question of style. I listened recently to the fifth of the Mozart violin concertos performed not so long ago by another eminent soloist. It was fine in its way. But your playing of that piece is lighter, more lyrical, less heavy, less overbearing.

Well, that’s one of my tasks as an interpreter, to find the particular sound that applies to a particular composer. For Mozart that sound is very different from that appropriate to Brahms or Prokofiev — or to Bach, going back.

So there has indeed been something going on regarding stylistic awareness. A soloist interpreting Mozart and Brahms in 1945 might not have applied that kind of differentiation.

Shifting gears, tell me something please about the “Lost Generation” programs of the orchestra’s preceding season. Is the inclusion of the Korngold symphony on this tour a continuation of that project?

The idea of it is something that’s very dear to our music director’s heart: the notion that there is a lot of incredible, important music by wonderful composers who have been somehow neglected. Last season’s choices had a lot to do with musicians who suffered under National Socialism, but we have also paid a lot of attention to the excellent Joseph Suk, too little-known outside of Czechia (the Czech Republic).

For Petrenko, Korngold is definitely part of this story. His symphony is fabulous. Colleagues assumed when they talked to me that he was much better known in the U.S. than he is, in fact. Some music needs to be moved away from the margins, and closer to the center. I think it’s a bold move to present Korngold on this U.S. tour.

As I listened to the “Lost Generation” concert of last June, consisting of works by Jewish composers, where you performed two pieces by Leone Sinigaglia, I was struck by your choice of an encore. It was a Yiddish klezmer melody. Notwithstanding the many Jewish composers and performers who have contributed to the Berlin Philharmonic’s history, was this the first bit of Jewish folklore to be heard on any Berlin Philharmonic stage?

I thought about that question when I chose it. It was appropriate, I believe, to the “Lost Generation” theme. Klezmer music has been a big part of my life, and next spring in Berlin we are doing a late-night concert of that musical world, including my own klezmer concerto, that premièred in Pittsburgh.

Will you be bringing in any klezmer specialists for that event?

It’s going to basically be in-house. One of our clarinetists, for instance, just loves that style. There are so many topnotch players with such a wide range of interests.

Terrific initiative, and we are looking forward to hearing you in Boston.

Joel Cohen is director of Camerata Mediterranea and music director emeritus of The Boston Camerata. He most recently created  “We’ll Be There,” a program of American spirituals, Black and White, for Camerata appearances in Boston and New York.