The entire planet bore horrified witness as Parisians knelt and wept silently, or sang hymns. In real time, we saw the cathedral spire crumble in flames, we all feared that the mighty building, with its two towers rising to heaven, a structure medieval but also romantic and somehow eternal, might be lost forever.

“The Miracles of Notre Dame” tells the story of the miraculous survival of the church by celebrating history vocal music sung within its walls as well as miracle tales, student songs, and minstrel turns performed in Notre Dame’s shadow, on either bank of the steadily flowing Seine. Boston Camerata collaborates with the Harvard Choral Fellows directed by Edward Elwyn Jones, and Longy School of Music of Bard College at Harvard’s Memorial Church on November 6th at 4:00. Thomas F. Kelly, and Caroline Bruzelius will lecture in the Pusey Room at Memorial Church at 2:30. Tickets HERE.But not eyes alone; if the architectural exploits of the cathedral were widely admired and emulated, the structures of musical sound as practiced withing the cathedral walls helped change forever the compositional and performance practices of Western Europe. They remain, as well, a source of inspiration today.

At the heart of Notre Dame music was liturgical, “Gregorian” chant. Yet the singers of the cathedral moved far beyond the monastic simplicity of the underlying chant melodies. New and elaborate structures were created, and florid, rhythmicised countermelodies evolved, encouraging solo voices (one, two, or three) to weave their decorations, distending and often dissembling the underlying liturgical melody (Judea and Jerusalem). The suspension of “normal” plain chant temporality creates, at least to our ears, another kind of mental and corporeal rhythm, an exacerbated spirituality, much as the vaults of the church architecture draw our eyes upward, towards the heavens. 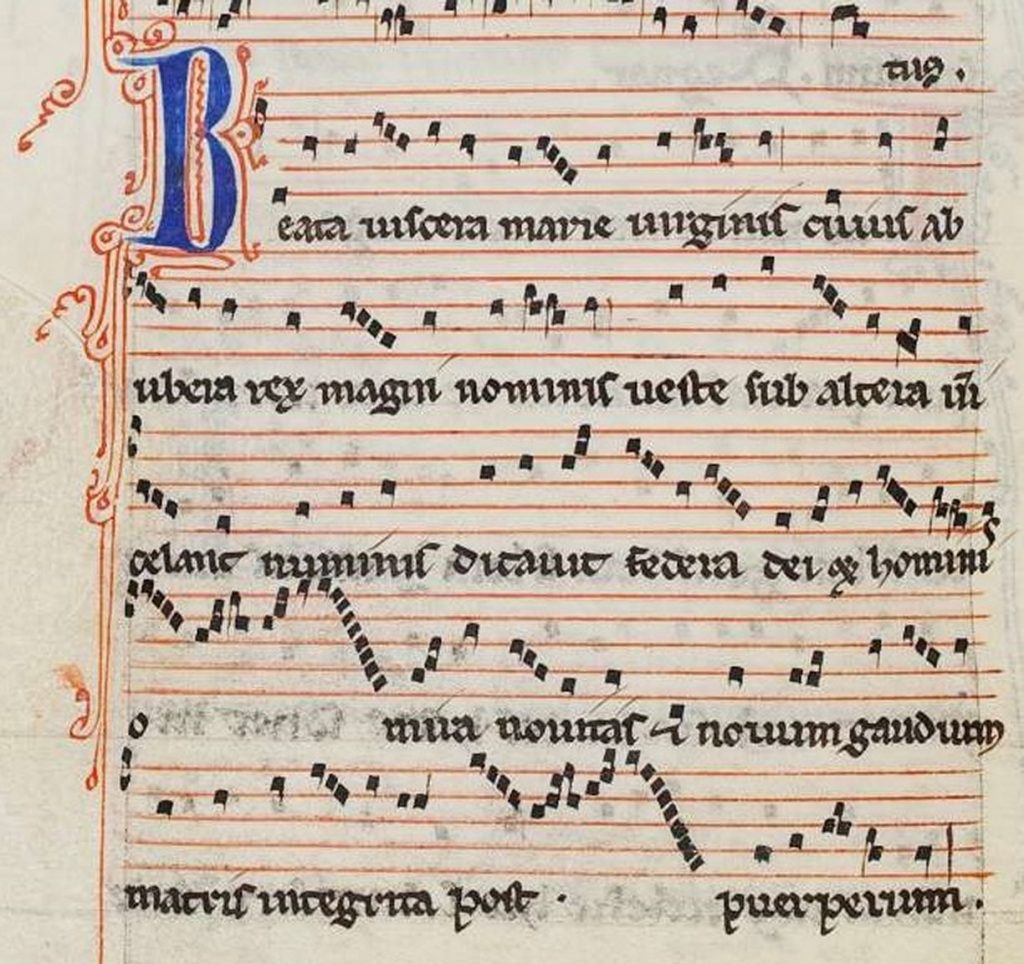 A few names coming down to us via the medieval theorist we have named “Anonymous IV” have been cited as masters of this new and daring style. “Leonin (and several others), Perotin (and his predecessors) and others,” are named. Their lives and specific achievements are otherwise unknown to us. They were leaders among a specialized, collaborative guild, mostly untenured, comparable in many ways to larger churches of our own day who maintain a regular musical program. This extraordinary group was, as we understand it, financially insecure even if musically gifted. Their employment terminated each year in late June, at Saint Jean, and they needed to be re-hired each fall. At least some of them had a reputation for raucous misbehavior, sexual and otherwise, and were apparently available for hire outside of their cathedral duties. This ebullient, all-too-human guild created a unique, magnificent anthology of heaven-storming sacred works. It was probably, as well, at the origin of other recreational pieces (sometimes including popularizing, dance-related French texts) derived from church practice but separate from the liturgy (Plus belle que flor).

Within the church walls, and without, devotion was intense around Our Lady—woman, virgin, mother, divine intercessor for fallen mankind. – Her place was central in liturgy, art, and music, and we share with you a number of beautiful works dedicated to her, from monastic orders (Ma vielle), from courtly milieu (Dou très doux nom), from the liturgy itself (Virgo gemma virginum), and intended for various publics. Paris was the center of musical creation, but other nearby regions— Vic sur Aisne, Reims, Beauvais — were also rich in Marial music, in composing churchmen, aristocrats, and minstrels — and in corresponding architecture as well.

Yet another world takes shape during these decades. On the left bank of the Seine, a few hundred yards from the great cathedral, the Sorbonne exerts its intellectual and moral authority. Was the musical style blossoming under the cathedral vaults also taught at the university? We do not know the answer. The science of musica was, however, part of the Sorbonne curriculum, taught by masters/magister who also had their place in the bosom of the church. The Sorbonne masters also propagated moral teaching, recalling to the dissipated young clerks under their purview the virtues of Christian life, citing Cato to “walk with the good.” A student’s glass (or two) at a Left Bank tavern was scarcely to be remarked on, but wastrel clerks must renounce the excesses of youth (Dum juventus floruit) and the shameful sins of the flesh (Vita perdite), and fallen Man must be exhorted to return to the straight and narrow path (Ad cor tuum revertere).

Notre Dame in the 12th century was a construction site; it was such at many points across the centuries, and it is so once again today. Is there a miracle at work? Our own humble challenge is to re-imagine the sounds that accompanied the creation of the great church, emerging, like the stone walls and vaults, from the indomitable force of the human spirit, spreading beyond the church walls to Paris and the human realm. Camerata singers and instrumentalist, along with esteemed student collaborators take joy in sharing the profound beauty of these works, at once, like the cathedral: medieval and yet transcending time.                Translated by Joel Cohen.

Comments Off on The Miracles of Notre Dame