Even though Joby Talbot’s Path of Miracles has notched more than 50 performances since the commissioning ensemble Tenebrae debuted it in 2006, the one-hour a cappella choral journey through the medieval (and modern) pilgrimage to Santiago de Compostella is not for fainthearted performers or audiences. Skylark’s confident, raucous, loud, and at times radiant traversal last night at Church of the Redeemer, Chestnut Hill, led this writer on a journey from a skeptical distancing through hypnotic confusion to free-will acceptance.

From its opening eerie rising glissando (a Taiwanese singing effect called pasiputput) for the gentlemen of Nigel Short’s Tenebrae, to the final distribution of the pilgrims having reached Finisterre, west of Santiago – when the singers disappear from the audience’s view, singing and chanting into the distance until all that is left is silence – Joby Talbot’s ambitious a cappella Path of Miracles is little short of a musical miracle itself. Allan Kozinn, New York Times 2011.

Seemingly drawing musically from earlier centuries and our own, while bypassing only the 18th and 19th, Talbot set librettist Robert Dickinson’s Greek, Latin, Spanish, Basque, medieval French, and German quotations, as well as his own English poetry, in overlapping and repeating ostinatos and a couple of chorales among the sometimes complex independent lines, homophony, and pungent cluster-dissonances which reliably resolved into triadic harmonies. Cumulatively his style piles up like no one else’s, though I’m not the only one to have noted whiffs of Kodaly’s relentless girls’ chorus writing, Randall Thompson’s vivid word-painting, and interludes of Whitacre’s commercialism.

Has anyone ever before seen a vocal score (it looks like an orchestral score) with 17 staves?  This cannot have been easy to sing with so much going on. In keeping the patterns in strict alignment and tuning some passing-strange intervals, Skylark’s 20 singers under Matthew Guard’s direction met every test they set for themselves, including the very theatrical projections of terror and awe.

The ensemble handed out a gorgeous 12-page, four-color, large-scale program book in keeping with the highest production standards and the need to compensate for multiple languages, repetitions, and confusing overlays in a reverberant space. From the back row of the mostly full church, the group’s repositioning looked meaningful but unclear of purpose. Was it to give prominence to certain lines? I gather the work can also be staged.

The oratorio, in four parts representing the pathway from Roncesvalles in the foothills of the Pyrenees, through the great cathedrals of Burgos, Leon, and Santiago, hardly encouraged the typical beautiful blends with fixed smiles; rather, Skylark’s well-tuned V17 professional vocal engine motored us pilgrims on a conveyance like none other into a world at once ancient and modern.

Richard Scott Carrick’s 2021 dissertation [HERE] lends a helping hand to this writer who is crying to readers from out of his depth:

Talbot composes in a way that does not lend itself to a classical, theoretical framework. For example, a Schenkerian analysis would be uninformative. While Talbot composes within a tonal context, Path of Miracles does not follow the same harmonic traditions as used by composers of the 18th and 19th centuries. … Rhythmic and melodic serve as motoric building blocks…and in combination create a steady current of energy under a very smooth surface.

Other than in recurring bright moments of chorales and a Latinate number that could have come from “Canterbury Tales” (and sounded like an Advent carol), Skylark adopted startlingly straight and raw production unlike anything anyone is likely to have heard from them before. They did not whisper to God, they rather shouted, cajoled, enjoined; they did battle with thieves and henchmen in pursuit of their geographic and spiritual goals, and ultimately recessed into the dark night having found transcendent peace. Our recollection of this singular concert will likely endure. 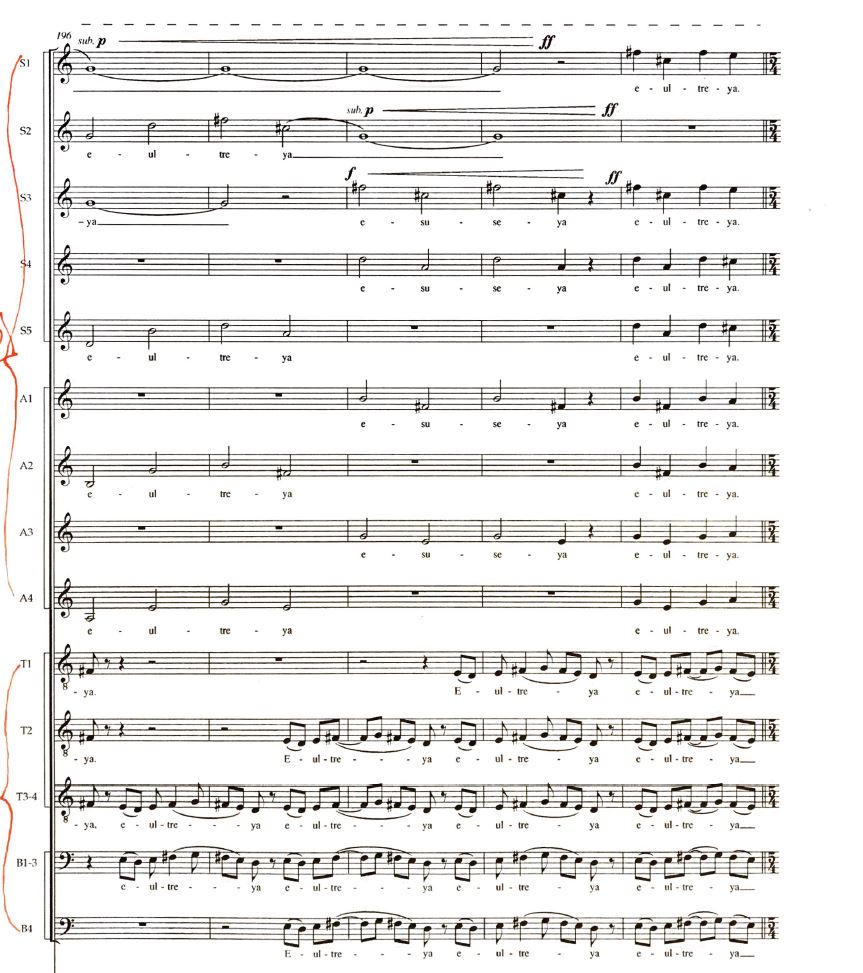 Comments Off on Fascinating Rhythm Meets Twist and Shout