Several unison riffs between marimba and piano with an overall emphasis on linear instances put Bebop Riddles II in motion in the debut of this CNM-commissioned transcription. Thomas (b. 1964) also went up tempo in spurts akin to that start-stop, soft-loud equilibrium evolving out of the ’50s-’60s avant-garde. Harmony often came at the stoppages, sometimes delicate (not lush as in Bill Evans), and sometimes quite harsh (unlike Thelonious Monk), both of whom the composer cites. Marimbaist Robert Schulz and pianist Christopher Oldfather energetically exchanged bursts, synced unisons, and playfully birthed some of the odds and ends of this first performance.

Harbsion based his song cycle Winter Journey on three poems from Louise Glück’s “Winter Recipes from the Collective.” “Although each song has an individual character,” explains Harbison, “I consider the piece to be essentially one very large movement.” Over the 20-minute span, it became evident that Harbison conflated three sizeable poems through vocal streams tied to a continuum of instrumental word painting and commentary. In Poem, Harbison (b. 1938) did not resist Glück’s “Downward and downward and downward and downward…” with obvious musical reflection.  In Afternoons and Early Evenings, a special warmth and glow pulsed to “The beautiful golden days…and the city was at its most radiant.” An expanded range of fetching vocal expression matured in Winter Journey, the longest of the three poems. Kendra Colton revealed a gift of singing as if to speak. Plump woodwinds ran some interference with Colton’s excellently modulated voice.

Luke Blackburn’s (b.1992) Concrete Currents “refers to the struggle of anadromous fish battling through human-constructed concrete structures such as dams.” Collage’s extreme high register notes from woodwinds and piano astonishingly portrayed fishes’ wave-like rhythms. The middle section slowed to blends of lower and higher structures of the harmonic series. A huge and noisy buildup suddenly swept in, ending the piece—the dam? 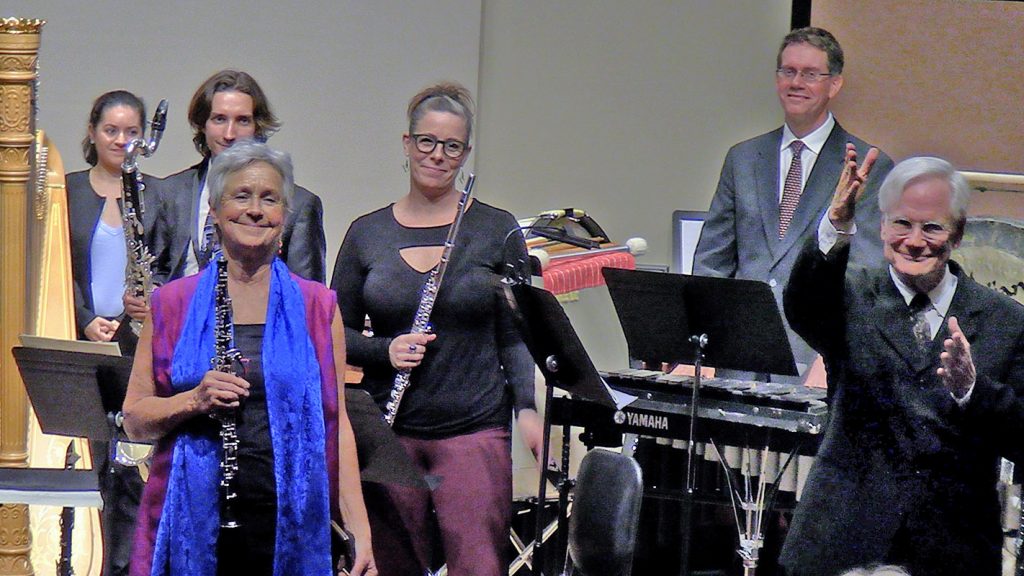 It was especially moving being present at the first Boston performance of David Froom’s (1951-2022) Fantasy Dances; they ran hot as in jazz (“Stomp”), intriguingly shadowy as in high caliber film noir (“Ritual Dance”), and full-length traveling, dreaming, rejoicing through memorable refrains and ear-catching instrumental voicings (“Jump”).

From Collage’s brochure, Frank Epstein began his nine-page story, “Collage Stirrings,” with “It was as a student at the Tanglewood Music Center that I got my introduction to the world of new music.” He recounted the first concert & players, ensemble loyalty, conductors, some unusual events, some traveling, and Collage’s music guidance & organizational support, ending with changing roles. “In 1991, after 20 years of leading the ensemble, I thought it was time to turn the  musical direction over to someone else…David Hoose.”

Thinking of the many participants, from composers and performers to supporters and audiences, Epstein concluded with “Thank you!”

David Patterson, Professor of Music and former Chair of the Performing Arts Department at UMass Boston, was recipient of a Fulbright Scholar Award and the Chancellor’s Distinction in Teaching Award. He studied with Nadia Boulanger and Olivier Messiaen in Paris and holds a PhD from Harvard University. He is the author of 20 Little Piano Pieces from Around the World (G. Schirmer).  www.notescape.net)

Comments Off on Collage Turns Fifty