Meng-Chieh Liu first made headlines in 1993, when, as a 21-year-old student at the Curtis Institute, he stepped in as a last-minute substitute for Andre Watts, and earned high acclaim from the critics and audience. Currently on the faculties of NEC and Curtis, he has performed under such great conductors as Christoph Eschenbach, Gustavo Dudamel and Alan Gilbert. Meng-Chieh Liu, who has won many competitions and has performed worldwide, is also the recipient of the prestigious Avery Fisher Career Grant, and maintains an active career as soloist, chamber partner and concerto player.

His world-weary entrance to the stage at Jordan Hall last night reminded us of the rare and debilitating illnesses that have almost ended his career. At one point hospitalized and almost immobile for a year, it was only with fierce determination and courage that he fought his way back to mobility and a pianistic career. A BMInt colleague observed something of a Faustian bargain in reverse: In response to the diabolical suffering Liu endured on earth, the keyboard gods apportioned him an unusually high share of artistic divinity in the here and now.

A set of three Chopin Nocturnes began with the B Major, Op. 32 No. 1, which has an improvisational quality, as if going from one thought to the next, each phrase nuanced to perfection. The difficulty of this nocturne lies in its simplicity, it requires nuance lest if become simplistic; Liu paused very dramatically before beginning and brought signal expressivity and freshness. The F Major, Op. 15 No. 1 starts with sweet and warm innocence, before exploding into a turbulent middle section. Liu finished it with Weltschmerz in an unhurried rubato of immense sensitivity the final time the theme returned. Chopin Nocturne in C Minor, Op. 48 No. 1, the most difficult of the 21, has been characterized as Chopin’s greatest emotional achievement. Liu achieved the deep solemnity of the beginning section, the uplifting middle chorale that transitions into threatening octaves in the left hand, and then the agitated return of the first theme with masterful timing and deep expression. 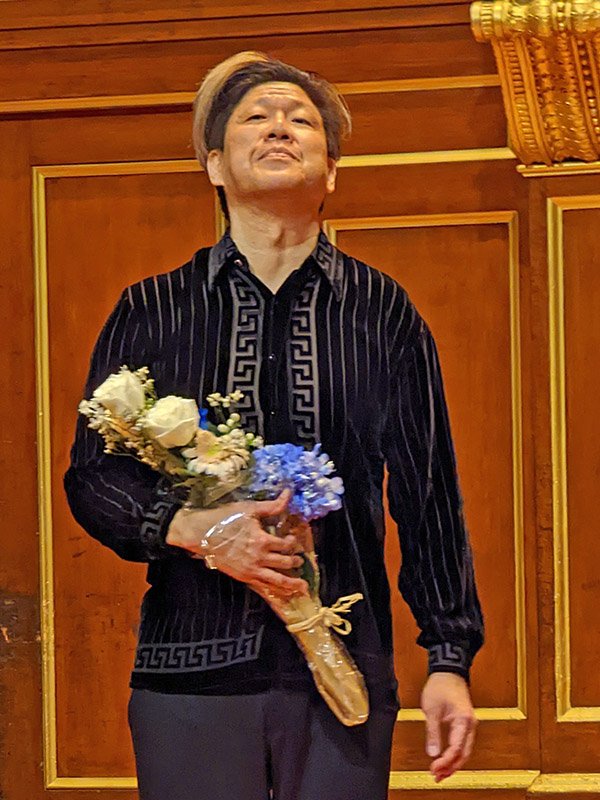 Liu continued in C minor with a Rachmaninoff knuckle buster. Unlike the Russian’s familiar Paganini and Corelli Variations, his Variations on a Theme by Chopin, Op. 22, are rarely performed. The theme, Chopin’s Prelude No. 20, is so well known that Barry Manilow used it in his hit song “Could it be Magic.” Rachmaninoff composed it in 1902 at his country estate of Ivanovka, while working on his his Opus 23 Preludes. The composer premiered the variations at Princess Lieven’s concert for the Ladies Charity Prison Committee. The reviewer Yuli Engel noted that “though significant, [they] are not always worthy of the theme that inspired them.” Rachmaninoff never essayed the set in public again.

Under Liu’s guidance these variations blossomed as he conveyed not only deep engagement and virtuosity, but also a profound insight into the music and its structure. He executed the variations with pianistic fireworks, varied colors, dramatic contrasts, exquisite hesitations and tearfully teasing rubatos. Rachmaninoff skips the repeat of the original theme, keeping it at eight bars, and most of the first ten variations, all in C minor, also running to eight bars, can be considered as a set, many of them reminiscent of Bach.

The final four variations are longer and could be played as standalones. Var. 19 in A major, takes a striking departure from the previous key, and makes a festive return to the original theme. The presto Var. 20, technically the most challenging, carries echoes of Rachmaninoff’s version of the Flight of the Bumble Bee. Var. 21 (Andante), ethereal, tearful, and full of texture, with several melodies intertwined, allowed MCL to approach something of a summa of his art. Var.22 (Maestoso ) makes for a varied tour de force finale, but MCL replaced the last page with a simple chord (which was indicated as an option by the composer), to end more inwardly. After nearly 20 seconds of rapt silence, he lifted his hands from the keyboard and rose to acknowledge the intense audience response.

Janáček composed his Sonata 1.X.1905, a somber piece in two movements, Foreboding (Con moto) and Death (Adagio), as a tribute to a carpenter named František Pavlík, who was bayoneted to death during a protest in 1905. Janáček worked on two additional movements, but being unhappy with them, he tossed his manuscript into the Moldau River. Later, he lamented about his impulsive action: “And it floated along on the water that day, like white swans.” In Foreboding there is an idealism and longing. Meng-Chieh Liu transmitted the spiritual and the agitated, the contrasts, the starts and stops, and the echoes in the RH and LH. Death’s simple, quiet and mournful motif recurs throughout.

Our journey into death continued with Granados’s Goyescas No. 5 – El amor y la muerte: Balada (Love and Death Ballad). Granados based this suite on paintings of Goya, and there is an actual drawing by this title that depicts a young soldier dying in the arms of his beloved, a sword at his feet. The piano here appears to be a mere extension of the pianist, as the music dissolves from tenderness into passion, into tragedy and despair and pain and back into longing and love. The theme vaguely suggests the “Maiden and the Nightingale” another part of the suite. MCL reveled in the theatrically depressing intensity.

In Après une lecture du Dante: Fantasia quasi sonata from the Années de pèlerinage, Abbe Liszt’s addresses the battle of good and evil as he did in his numerous Mephisto Waltzes, the Totentanz, the Funeral March Sonata, and a host of religious pieces composed in the 1850s. He completed the Dante Sonata in 1849, though he began to develop the theme in 1830. It starts with augmented 4ths, the Devil’s interval, and the first theme arrives in D minor, the key of death… of souls awaiting hell. In contrast, the F-sharp major second theme depicts heaven. The Sonata closes in the hopeful key of D major, exploring the mystery of the afterlife. Meng-Chieh Liu, the perfect interpreter, made much of how refining struggle summons hope. Though technically challenging on so many levels, even more significantly, it demands emotional maturity. It has been said that great art comes from great pain and suffering, and perhaps that is true, for how else to explain this human understanding Liu takes from his personal experience to Liszt’s eventful journey.

Responding to cheers and bouquets, MCL encored with Chopin’s posthumous C-sharp Minor Nocturne, made world famous in the movie “The Pianist.” From his superb phrasing of the melody to the even-though-romantic trills and the pearly ascending and descending scales at the end, and especially in the unexpected tiny pauses that add such poignancy, this high priest of the keyboard left us with a rarefied blessing.

Sibylle Barrasso is a long time piano student of Robert Poli. She has played in piano competitions in Pickman Hall and Chicago, is on the board of directors of the Boston Piano Amateurs Association and has played for audiences in the Boston Symphony Cafe for over ten years.

Comments Off on Pianist Shares Immense Sensitivity and Drama