Forget what you knew about La bohéme, and for that matter, discard all your preconceptions about opera. Without a doubt Boston Lyric Opera’s staging of Puccini’s evergreen masterpiece entered the annals of memorable shows which have occupied the legendary Colonial Theater over its 123 years. Stage director Yuval Sharon remained completely true to the musical and textural demands of the classic while breaking ground by ringing changes on the order of acts.

Working with an extreme economy of sets and scenic design on the 40 x 40 ft. stage, the production succeeded on the basis of exceptional acting-singing from the principals and ensembles as well as superlative lighting and stage business. A turntable maintained visual interest even in relatively static scenes and motored the show through 100 non-stop minutes.

A crowd running quite 30-somethingish filled the orchestra and first balcony, though lots of seats remained empty in the heavenly second balcony. So it looks possible to find a seat for the remaining shows which run through October 2nd. Take my advice and don’t miss it.

The serviceable staging didn’t overwhelm the very human tale the way Zeffirelli’s does at the Met or downplay the sonic splendor the way Baz Luhrman did with miked singers (tonight’s Jesus Garcia played Rodolfo) and a small pit band in his profitable run on Broadway. The BLO show worked theatrical magic in the 1,500-seat house sharing emotions across the footlights in a way not possible in a typical opera barn. Although the Colonial is not a golden horseshoe with half a dozen tiers, it would be recognizable to the composer as late 19th-century in style; architect Clarence Blackall’s gilded extravaganza of curves and ornamentation visually echoed Puccini’s gleaming orchestrations, which 52 virtuosic players realized with distinction under the sensitive and stylish direction of David Angus. Indeed, the orchestra and conductor earned the second most powerful bravos in the curtain calls. From my seat in the dress circle, the orchestra sounded ample of tone and warm. The orchestra occupied the first five rows of the house (with the harp in a box on the right and tympani in a box to the left. That placed the bassoons right up against the stage, recalling a Degas painting.

And while we are talking about painting, let it be noted that John Torres’s emotional light painting transformed the otherwise unprepossessing splotchy turntable and cyclorama into a vivid evocation of scene and mood. He masterfully used footlights, not only in the chorus procession of the Parpignol chorus, but also in the duet of Marcello and Mimi, where the resulting shadows, looking like a struggle before the gallows, foreshadowed (or would have foreshadowed in the normal act order) Mimi’s death. At the end, the abstract scrim became a surrealistic distant galaxy as Mimi and Rodolfo imagined a bright future we knew would not be theirs. No mean poignance there.

Sharon could begin the show with Act 4, containing Mimi’s death, since he conjured up a narrator to set the scene. As superbly voiced by Marshall Hughes, this omniscient interloper reminded us in his cheerful but deliberate manner of the stage manager in “Our Town,” or forgive me, Uncle Remus, another wanderer-explainer (now justly or unjustly suppressed in Disney’s “Song of the South”). Often, as he spoke and ambled while the other players were freeze-framed, one thought of cinema.

According to the efficient Glyndebourne synopsis, in Act 3, dawn breaks and snow falls (we got some later) on a chilly February morning, as Mimì pours out her heart to Marcello, telling him how Rodolfo is making their life miserable with his obsessive jealousy. Rodolfo confesses to Marcello that the real reason he wants to leave is that, because of his poverty which has brought on her sickness, Mimì is dying. Now he is consumed with guilt. Mimì overhears and cries out which forces Rodolfo to comfort her. They decide to wait until spring arrives to part.

But why not have a party with the funds four bohemian boys decided to employ for better purposes than paying overdue rent (the Benoit-landlord scene was the only apparent cut)? So after some earlier (time did not run consistently forward in the adaptation) antic horseplay, choreographed almost as stylish martial arts, could, after Colline (William Guanbo Su) and Schaunard (Benjamin Taylor) left the garret holding hands, be seen as foreplay. Did this small moment mean something?

Since Sharon is ringing changes—4321 instead of 1234—how about 4312? On upbeat matinees, the opera could have a decidedly boffo finish in Act 2’s Café Momus. Conklin’s set came alive with lighting, costuming, masks, buildings carried aloft by choristers and then flipped to spell Momus filling the cafe with enough sound light, prancing children and drunken movement and on and around the turntable to blur mise en scène into a coup de theatre. Thanks to Parpignol, we witnessed movement and theatrical art enough for several operas. 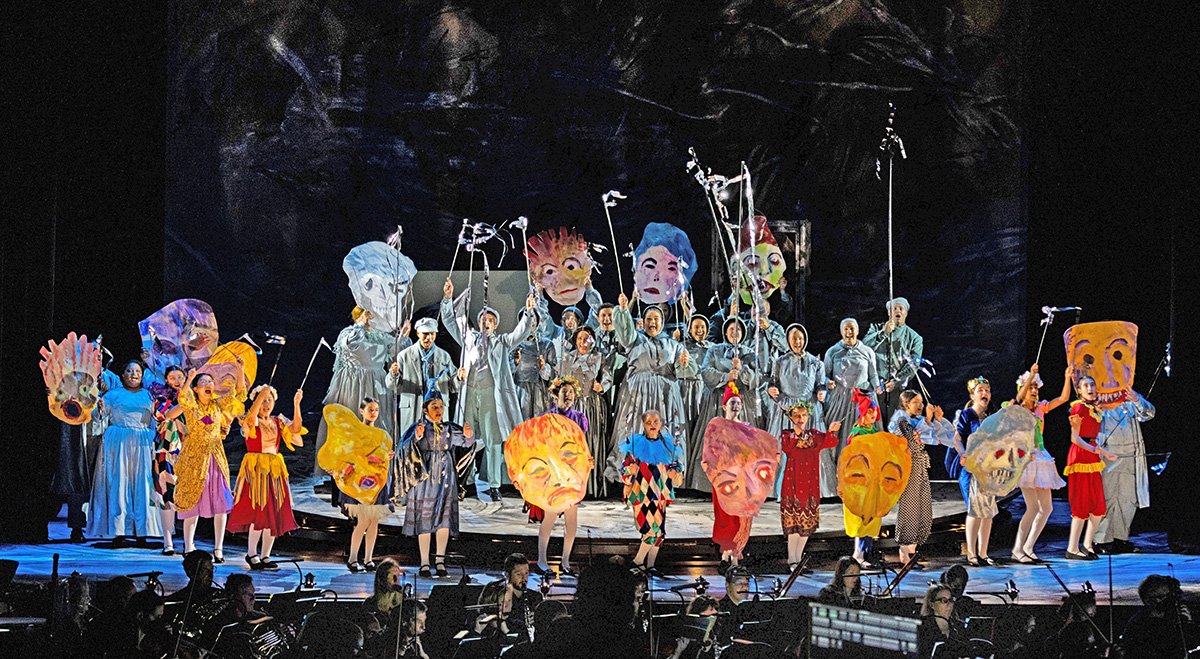 BLO cast all the roles superbly:

In ensembles everyone listened to one another with no competitive diva bellowing…real acting, darling…as the diva assoluta said to this writer in an earlier interview [HERE].

Even the comprimario parts were cast and sung beautifully.

The vivid Marcello of Edward Parks, large of tone and stature, dominated whenever on stage.

Colline’s coat aria gave William Guanbo Su a chance to shine with his commanding baritone in warmly compelling fashion We could certainly imagine him as Mozart’s Commendatore.

Benjamin Taylor’s account of Schaunard made for a propitious debut for this mellifluous scenery eater!

Familiar to us for much great work in Boston Junhan Choi showed a playful side as Alcindoro. We can see why he earned a Presidential Scholarship at NEC. He has matured into an essential player.

Though a head shorter than his comrade Marcello, tenor Jesus Garcia (Rodolfo) sounded more authentically Italianate that anyone else on stage. He sang with beautiful tone and compelling ardency. He saved something special for Act 1 (which of course came last) ringing forth over the large orchestra with comparative ease and, in the final duet with Mimi, raised the stakes to with tenorial urgency.

Here’s the buried lede. Lauren Michelle gave Mimi a life that will resound in theatrical history. Her dramatically powerful, wide-ranging, highly inflectable, and burnished voice hitched to highly developed acting skills, along with gorgeous and irresistible stage presence (she looked great in the three gowns Jessica Hahn designed for her) augur a great career. Don’t miss her.

And see the show!

Pre-Show Lecture one hour before curtain.

CAST (in order of appearance)