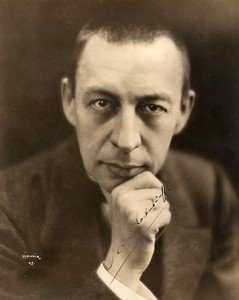 The stories by Alexander Pushkin and Dante tell of an exiled Russian nobleman consumed by jealousy, an aging Baron who dies calling not for his son but for his gold, and a young couple consigned to the Second Circle of the Inferno after an illicit kiss. Presented in concert in Russian, with English Supertitles in a collective US premiere on September 25, 2022 at 3:00 PM NEC’s Jordan Hall. Tickets HERE

FLE: All three operas can be auditioned in multiple YouTube streams. Miserly Knight got done at Bard this summer, and Aleko is hardly unknown. Commonwealth Lyric Theater, specialists in Russian/Ukrainian repertoire, did it in Boston about ten years back. [reviewed HERE]

Gil Rose: Even though it was a student work, Aleko has had something of a continuous concert life on stage. It gets done, often paired with various things.

And how did you come up with the idea of this triple bill? You say, they haven’t ever been fit together, though in 1906 at the Bolshoi Theatre, Moscow, Rachmaninoff conducted a double-bill of Miserly Knight and Francesca da Rimini. You probably are correct in claiming a first for this 3.5-hour triple header.

We do big concert opera productions every September to start the Odyssey season. I don’t know where the idea came from frankly because it was kicking around for years. The comprehensiveness of doing somebody’s complete opera output in one somewhat long, but not ridiculously long sitting was just attractive and flashy. The pieces are quite different; you don’t feel like you’re hearing the same thing over and over again.

They sound like Rachmaninoff through a filter. Because Rachmaninoff was young when he wrote it, Aleko has a lot of Borodin in it… a lot of Prince Igor and the Polovtsian Dances and that kind of feel to it. It’s much less complicated.

He wrote Miserly Knight not long after he first went to Bayreuth and you can really see the Wagnerian fascination in how he uses motifs and writes, as a lot of the music resembles the Ring with themes for the love of gold as an example. And there’s a much more chromatic palette.

Then just get to Francesca da Rimini, it’s got an almost impressionistic style to it. A wordless chorus kind of sounds like they Daphnis and Chloe. They’re very different. Actually, Miserly Knight and Francesca da Rimini were written fairly close together in time but they sound different. We know he wrote big bass parts for all three. Miserly Knight was definitely written for Chaliapin, though apparently Chaliapin declined to play it. There’s a bass part in Francesca de Rimini, which he did.

Will any of the singers appear in all three shows?

Is there a Russian chorus?

There’s a chorus singing in Russian,

But do they have that bottom-heavy massiveness?

Does anybody? We recruited a chorus with many people from the Russian/Ukrainian communities, but it’s not a chorus of 110 or something. It’s about 60 singers. And yes, the chorus in Aleko includes women.

So, the Jordan Hall stage is going to be extended to make room? And I assume that this is a strictly concert version.

Right. And I cannot imagine staging Francesca de Rimini because it’s so fantastical.

Do you use the “g” word in your synopsis?

Well, we use “gypsy” to the extent that it was used or referred to in the original language. But we also have made a trigger warning for the very anti-Semitic character in the Miserly Knight in addition to dealing with the gypsy issue in Aleko.  But it comes from Pushkin, so it’s not news. This is something in today’s environment you just have to be aware of. We refer to it as a Gypsy wedding when Rachmaninoff referred that way, but we also use the term Roma.

Pushkin and Dante aren’t shabby literary sources. Are the libretti interesting? Are the texts worth parsing?

I’m reading two translations—one English, one German; it’s fascinating. The text, especially in the Miserly Knight is basically, a couple of strung together monologues and there’s a big monologue for the son. And then also the Miserly Knight title character has a 22 minute- monologue about his love of his stash of gold.

Does it make you think of the “Pardoner’s Tale” of Chaucer?

A universal theme. It’s been around for a while.

Anything to say about the individual singers?

It’s a great combination of some Russian singers and some Ukrainian American singers, all with experience in Russian. Language is so critical for this show.  The singer playing the miserly Knight Misha has been around for a while and fits perfectly into the part for a man in older days.

In this kind of straight-from-Russia fiction, language is really critical, especially these which is very parlando scores with a ton of words. It’s more of, a big “speak” than a big “sing” in a way.

Looking ahead, are we going to have staged operas in the spring? And what else is coming?

We’re waiting a little bit, for the completion of the Huntington Theater renovation. We have a couple things in the works, but exactly when they’re going to land is still uncertain.

In November in Jordan Hall we’re doing John Corigliano’s new opera Lord of Cries. And then we’re going to announce what’s happening in the spring

Comments Off on A “Troika” Before the Snows