The Catalyst String Quartet delivered an altogether inspired concert on the penultimate weekend of Maverick Concerts. After the young players opened with Haydn’s String Quartet in B-Flat Major, Op. 76, No. 4, the “Sunrise,” they gave pride of place to works from the 20th century, with particular emphasis on music by Black Americans.

Baritone Dashon Burton joined the Catalysts onstage to round out the first half with a beautifully curated bit of programming. Before launching into Barber’s Dover Beach the ensemble introduced us to a very short piece for baritone and string quartet by the dazzlingly gifted and once grievously overlooked mid-century African-American composer Florence Price. Her miniature Night provided a foretaste of the joys to come in the second half of the concert, and it led attacca into Barber’s setting of Matthew Arnold’s famous poem, which itself is an uncanny apprehension that resonates today. It still demands that we pay attention, that we remain “swept with confused alarms of struggle and flight,” that these have not abated, that ignorant armies still clash by night. Burton’s lyric powerhouse voice proved quite irresistible. It would have been helpful to have the texts of these two works included in the handout, particularly the Price art song which set a lovely poem by Louise C. Wallace. 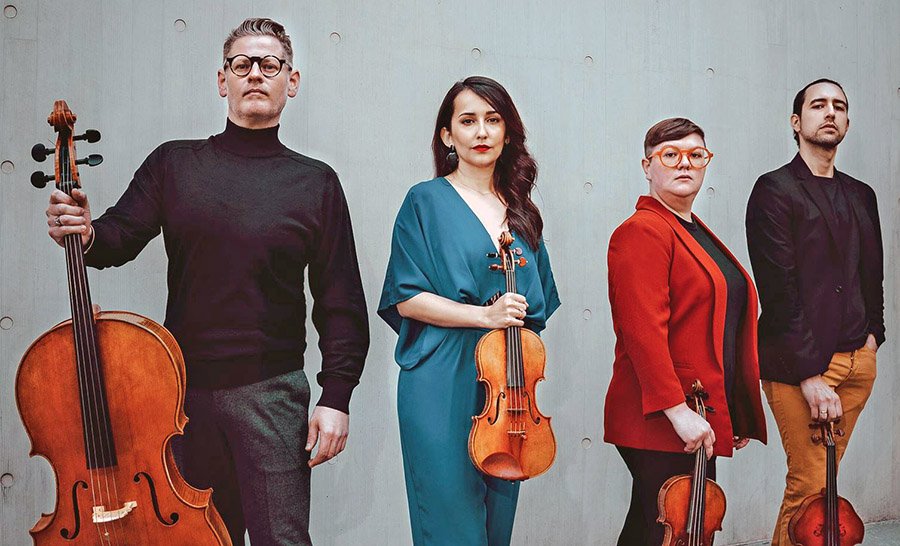 A thunderous rainstorm started as the Catalysts took their places on the Maverick’s wooden stage; the downpour continued without surcease through the Haydn and well into the Barber. It was magical. The acoustical properties of the Maverick Concert Hall are such that the much-needed rain formed for the music a scrim, a tactus. The storm and its cannonades did not detract in the least from the performance; on the contrary, it confirmed a listener’s impulse: Sit up! Pay attention! And it confirmed the belief that there was no better place on earth to be at that moment.

After an intermission (the rain had stopped by this time), the Catalyst offered four miniatures from an ongoing project they had commissioned from Billy Childs, Paquito D’Rivera, Angelica Negron, and Joan Tower. Each of these winsome morceaux ran less than three minutes.

In Price’s revelatory String Quartet No. 2 in A Minor from 1935, the Catalysts found both firm footing and heady romanticism in the work’s dense harmonies and its rapturous melodies, which evoke both Black spirituals and a turn-of-the-century folk-song esthetic that informs the chamber music of Dvořák.

Comments Off on Revelations Catalyzed at the Maverick