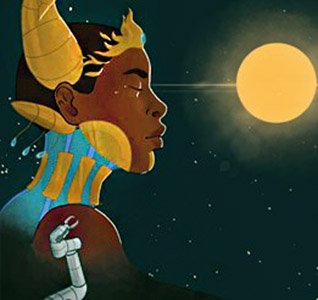 Creator and librettist Cerise Lim Jacobs tells us that the ninth (or so) of her “diverse, timely, and relevant operas based on her original stories … Traverses the mysteries of time, space and love, through wormholes and black holes, in this sci-fi opera that blends live staging and virtual reality. Inspired by both the 400th anniversary of the landing of the Mayflower at Plymouth Rock and the historic landing of the space probe Philae on Comet 67P/Churyumov-Gerasimenko, Cosmic Cowboy meditates on both the power of human imagination and the consequences of our colonizing impulse.

The opera is an eclectic romp through the universe that ranges from the formation of the cosmos by the mating of the Sumerian gods Tiamat and Apsu to a touching pas de deux between Cooper, a robotic space probe, and Tiamat’s daughter, Tia.”

FLE: Humans have always explored, thus Cerise Jacobs’s making the connection between space travel and the Mayflower is not as bizarro as it might seem, though the connections with Magellen’s voyages might have been more apt. Sumerian gods, Tiamat and Apsu also apparently come into the picture in this sci-fi, fantasy mix. Wagner figures too with strange Tarnhelmisch nets. Have you dabbled in these occult spheres either as a reader or a composer before this commission?

ER: The main thing that attracted me to Cerise’s libretto was that it was a science fiction opera…I read sci fi a lot as a teenager, also loved comic books as a kid.  Cosmic Cowboy brings me back to my childhood.

Cosmic Cowboy explores the origins of the universe beginning at the Big Bang when the universe is formed by the mating of the Sumerian gods, Tiamat and Apsu.” Haydn merely depicted the creation of this world. Are you going him one better with the sonic depiction of the creation of the universe in a big bang following the sexual congress of two oceans? What’s that going to sound like. After a poetic description of chaos, the plot seems to jump into video-game conflicts. Does your music change personality abruptly?

Characters “dance on comets.” Sounds like “The Little Prince”? I gather there is humor too.

Yes!  There is humor and excitement and fun!

“Live staging and virtual reality”?  Does your score accordingly morph between live players and pre-recorded and electronic materials? What is the orchestration?

I use no electronics other than a synthesizer with one stop, a kind of space age harpsichord.  There are a few sound effects that we may use—rather like a film score.  The orchestration is for string orchestra (single strings) 3 brass, synthesizer and timpani.  The timpani has a big part!

Are there arias duets, ensembles and other such set pieces?

Yes it’s rather standard in that way, I feel like it floats between a Mozartian opera and Wagner and then something more modern, maybe even film music.

“Tiamat makes Qingu Commander of her forces. She gives him the Table of Destinies which controls the fate of all things and commands him to kill his father’s assassins.” That sure sounds like grand opera, maybe even verismo… Do we ever forget we are watching a show and experience something human? I gather there’s a love duet and a Liebestod.

Yes there are touching duets and a Liebestod at the end although it is more of a triumphant final aria.

With 20 or more scenes, the libretto sounds rather episodic. Do you have motifs that define characters and or situations that memorably recur?

Absolutely.  Each character has a kind of sound, from the robot, Cooper, who has a big character arc, to Marduk, represented here by a 12-tone set, to Tia who has a more romantic sound.

“Tia wheels the comet around and rides into the sun.” Will we end Ringlike where we began with another big bang?

Not another big bang but a triumphant recapitulation!