Ensemble Altera ‘s “The Lamb’s Journey” depicted the Christ narrative from childhood through the crucifixion and resurrection. On Saturday night at St. Paul’s Church in Cambridge we heard a live account of the ensemble’s debut album of the same name. Featuring music from the Renaissance through today, the 23-voice professional chorus based in Providence proceeded through chapters entitled Invocation, Passion, Resurrection, andAdoration. In addition to well-known favorites by Gibbons, Lotti, Scheidt, Howells, Barber, and Bruckner, director (and countertenor) Christopher Lowrey programed the 20th– and 21st –century works by Poulenc, Messiaen, Leighton, Lukaszewski, and Esenvalds and three world-premiere performances of works written for Altera.

Chapter One, The Call (Invocation) began with Gordon Slater’s Jesu, the Very Thought of Thee in Paul Halley’s (b. 1952) arrangement. The very sensitive organist James Kennerley accompanied the bright voices of the chorus. In Salvator Mundi from Herbert Howells’s (1882-1983) Requiem, the chorus showed a more subtle side, contrasted by a strong dynamic swell in the middle of the piece, which painfully reflected the death of the composer’s son.

Zuzanna Koziej (b. 1994) composed The Lamb with echoing sounds in elegant simplicity. In the Agnus Dei from Poulenc’s (1899-1963) Mass in G Major, the chorus achieved seamless ensemble perfection, while the four different sections also came across with distinct clarity. After Elijah McCormack’s soprano solo, and the mysteriously harmonized Miserere and Pacem . . . The Word of the Lord ended unisono.

Pawel Lukaszewski’s (b. 1968) very dark O vos omnes from Responsoria Tenebrae got Passion, the second chapter, underway with expertly interwoven dolorous dissonances. The chorus showed passionate suffering and the sopranos cried out in the end of Kenneth Leighton’s (1929-1988) somber Drop, drop slow tears. A subgroup portrayed Antonio Lotti’s (1667-1740) Crucifixus à 8 intensely with a vanishing pianissimo at the conclusion. With the organ in the full chorus rendered the Agnus Dei from Bruckner‘s Mass in E Minor, nicely working out the wide dynamical contrasts and transfiguring harmonies.

Michael Garrepy (born 1990), an Altera choral singer, as well as the group’s artistic advisor, arranged the American spiritual Were You There When They Crucified My Lord?, reportedly a favorite of Mahatma Ghandi. It started with Michael Garrepy’s solo accompanied by the humming choir, followed by a glorious tutti. Despite the tragic text, the chorus rose triumphantly, but ended softly in beginning Chapter 3, Resurrection. In Samuel Scheidt’s (1587-1654): Surrexit Christus Hodie, two female and five male voices and soprano soloist Eleonore Cockerham (a former member of the world-famous vocal group Voces8) surrounded the portative organ. Orlando Gibbons (1583-1652) wrote O clap your hands (almost reminding of the sound of the Twelve Days of Christmas), for the Chapel Royal in London; Henry Purcell succeeded him there. Samuel Barber (1910-1981), who had himself trained as a baritone at Curtis Institute, wrote this Agnus Dei based on his famous Adagio for Strings. The profound melancholy and especially the contrasts to the softer lyrical lines could have been expressed in greater clarity, like in the soft ending.

During Chapter 4: The Gift (Adoration), which featured songs from Holy Sacrament, the conductor placed himself in the middle. Displaying wafting clouds of incense, the chorus supported soloists’ interplay between Cockerham and Garrepy in Francis Grier’s (born 1955) Messiaen-influenced Panis Angelicus. Grier had composed it in response to the sudden death of the director of music of King’s College London. Although deeply religious, Olivier Messiaen (1909-1992), produced but one sacred motet, O sacrum convivium. The acoustics of St. Paul allowed effortless reverberation, suggesting an impressive French cathedral. The initial dissonance dissolved in the middle and congealed somewhat; Ensemble Altera could have intoned more mystically.

For Latvian Eriks Esenvalds’s (b. 1997) O salutaris Hostia, Ensemble Altera created a pious sound world of restrained tranquility designed to transfix us. McCormack and Eleonore Cockerham floated marvelously over a choral ostinato which erupted in one brief middle moment of ecstasy. 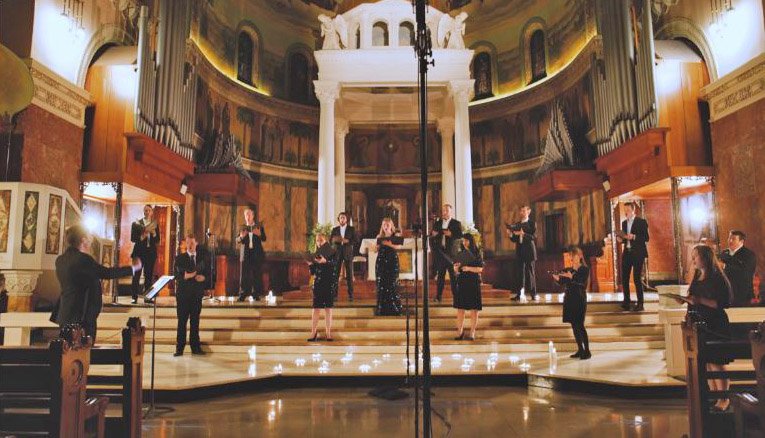 The group commissioned Joanna Marsh (b. 1970) who intermingles her experiences in the UK and Dubai with an engagement with the past of Tudor and Elizabethan as well as Abrahamic hermeneutics. Worthy is the Lamb requires a double choir together and organ. Rhythmically incisive, hymn-like interplay between the two choirs and the organ transported us to a world beyond the earlier somewhat stoic motets, and closed to the evening’s journey powerfully.

Lowrey had selected all the singers and had demanded great attention to detail, including clear pronunciation and articulation, as well as nuances of phrasing. The concert unfolded with quiet inevitability, though rising at times to a passion capable of overwhelming; it also moved the audience to demand more. In the encore, Lowrey encouraged the audience to join in on verse five of the opener, Gordon Slater’s Jesu, the very thought of Thee.

On the basis of what I heard, Ensemble Altera is succeeding in its mission of “creating thoughtful, engaging, and relevant programs in a wide range of idioms, from medieval to modern.”

With a biochemistry PhD and a career in the life sciences industry, Stephanie Oestreich also performs as a violinist and conducts workshops with orchestras demonstrating the similarities between teams and leadership in music and management.

Comments Off on Invocation, Passion, Resurrection, and Adoration