Opening the penultimate concert of this year’s Rockport Chamber Music Festival, the Los Angeles Guitar Quartet instantly riveted with its rendition of the overture to Rossini’s The Barber of Seville. LAGQ’s seven-string guitarist, John Dearman, who arranged the selection, employed concerted rasgueado strums for the orchestral tutti chord punctuations that begin and end the piece. Throughout, the performers showcased their dazzling ensemble capabilities. They swapped melody and accompaniment roles frequently and executed antiphonal trades of the famed opera buffa’s themes across the quartet alluding to the dialog between winds and strings in the original.

Before bringing the quartet onstage, the festival’s artistic director, Barry Shiffman announced that he enticed them to make a run out to the Shalin Liu Performance Center with the allure of the venue, widely renowned for its picturesque setting and great acoustics. Before introducing the second entry, LAGQ leader, Bill Kanegiser, seemed to ratify Shiffman’s remark. Gazing across Rockport Harbor through wall of the glass behind him, he joked, “We’ve played in front of a lot of stage backdrops, but this one is very realistic.”

Black Opal featured a sauntering ostinato comprising subdued sprinkles of pizzicato bass notes and melodic fragments passed seamlessly between the players. “Water Opal” was grounded with strummed minor-seventh chords accompanied by light percussive taps on the guitar body and glinting harmonics. Around the midpoint, out-of-the key passages cascaded downward before flurries of ascending figures in variegated harmonics diffused into a tranquil ending. “White Opal” picked up the pace with a fabric of rhythmic activity built of phrases woven by the four fret men from lines suddenly emerging and receding. The movement concluded with a widely voiced A major triad.

Frederic Hand’s Chorale started introspectively with a noble theme harmonized predominantly in a four-part vocal style as the title leads us to expect. LAGQ reverentially navigated the unfolding textures of the work’s mostly restrained moods and unexpected harmonic shifts. The program notes detailed that Hand draws on influences from Renaissance, Baroque, and jazz music, and all were clearly discernible.

The group concluded the first half with two of the six movements from Pat Metheny’s Road to the Sun. Matt Greif shared that he and his fellows are still pinching themselves thinking the multi-Grammy-winning jazz master composed it for them and invited them to record it for his 2021 album bearing the suite’s name. Greif described it as Metheny’s testament of his music. Most of the jazz guitarist’s compositions rely heavily on improvisation. However, he notated this score meticulously with abundant performance notes to enable LAGQ and future musicians to perform it as he conceived it.

Part 1 opened with a blend of gently brushed chords and soft, bubbling arpeggios before Kanengiser introduced the yearning first theme. It spun off contrasting but equally affecting melodies over vivid Methenyesque harmonic vistas before a fuller recap of the first theme. Part 2 adopts a quasi-Latin ostinato over which all players exchanged melody and accompaniment chores. As the movement unfolded, a variety of tremolos, pedal points, and strumming textures appeared and then faded into the next episode. Kanengiser introduced a jaunty melody as the intensity built, and vigorous strumming mounting up from four players culminated in a triumphant final chord. The audience clapped long and hard as the guitarists bowed before exiting for intermission. 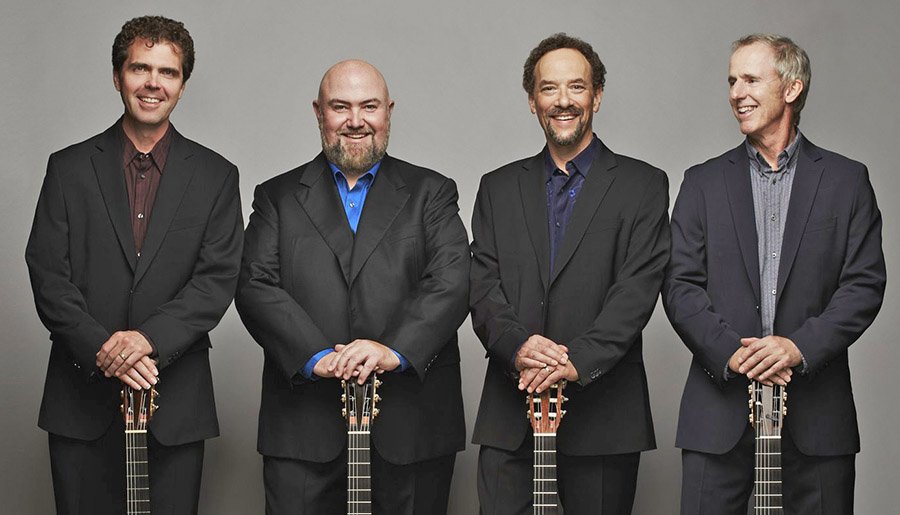 LAGQ launched the second half with three pop music selections. Greif arranged Aerial Boundaries by Michael Hedges, who enjoyed a spectacular, but sadly brief, career as a six-string innovator. From the solo guitar original, Greif divided the non-pitched percussive and fretted-note ostinati, short melodic fragments, chordal harmonic sweeps, and bass lines, expanding the sonic image with parts darting between the players. Greif’s take on Jimi Hendrix’s The Wind Cries Mary adds LAGQ to the long list of artists ranging from Sting to Miles Davis to Pat Boone who have covered the rock ballad. The quartet gave it a tender reading and included the song’s signature guitar hooks and upper-range soloing. Kanengiser’s workup of Peaches en Regalia, a lively number penned by rock icon and musical satirist, Frank Zappa closed the segment.

The quartet steered back toward mainstream classical repertoire with the first movement from Beethoven’s Piano Sonata No. 14 (Moonlight) and three selections from de Falla’s ballet, El Amor Brujo. The soft timbre of the guitars plus the availability of vibrato on melody notes cast new light on the Beethoven chestnut. Reducing the de Falla from its orchestral original to a guitar quartet setting brought the composer’s Romani inspiration clearly into focus. The players let the flamenco techniques rip in the three movements: Pantomima, Canción de fuego fatuo, and Danza ritual del fuego. Scott Tennant’s fleet-fingered picados and fingernails-on-wood castanet impression were among effects deployed by all to emphasize the work’s Andalusian roots. Danza ritual del fuego made for a crowd-pleasing finale. Its angular melodies, thrumming chordal accompaniment, low-end cross-string trills (evocative of buzzing insects), and seemingly endless chord jabs imitated the foot stamping portrayed in the ballet’s exorcism scene. Following the final stomp, the crowd demanded an encore.

Comments Off on Polished Gems from Europe, Australia, and the Americas