Over the years 1918-21, under the rubric Verein für musikalische Privataufführungen, Arnold Schoenberg and his colleagues produced chamber-ensemble versions of well-known orchestral masterpieces. The 177 concerts in Vienna presented chiefly new music from all over Europe for an audience of private membership. Though these economical arrangements have been undertaken and recorded by many local organizations, I particularly remember a Collage New Music performance from 40 years ago of Schoenberg’s Five Orchestral Pieces, op. 16, arranged for 15 instruments by Schoenberg’s son-in-law Felix Greissle. John Harbison, who conducted the performance from Greissle’s manuscript, mentioned that it was evident from the score that Schoenberg kept close watch over every minute of the arrangement process. [Publisher Lee Eiseman, who owns a harmonium Schoenberg probably played, has lent his instrument for many traversals of this repertoire, including Cantata Singers’ Das Lied von der Erde under Harbison in the 80s and Mahler’s Fourth Symphony under Bramwell Tovey with the Rhode Island Philharmonic two years ago.]

From upstairs in the back of Rockport Music’s three-quarters-filled Shalin Liu auditorium, Yoobin Son intoned Debussy’s Syrinx, for unaccompanied flute. There aren’t more than three or four pieces for solo flute that anyone would ever want to hear, but this is one of the greats. She played with a wider range of tempo and dynamics, and considerably more expression, than Debussy’s intimate score demanded, but no matter, it sounded lovely throughout.

Benno Sachs’s chamber version of Prélude à l’Après-midi d’un faune preserves much of Debussy’s original timbral quality with remarkable clarity, well underlined by the pellucidity and precision from all players. A concert accordion, carefully wielded by Michael Bridge, took the part of the called-for harmonium— a regular stand-in at Verein concerts for its quietly gathered wind tone and tonal glue. You heard this from the beginning at m. 4, whereupon the third horn’s notes in mm. 5, 8 and 9 appeared in the clarinet, and these were just fine. On the last page of the score, the ghostly chords at mm. 107-108 — you can find them in Example 3 HERE — are memorable for two horns and first violins, all muted; last night it really worked with the accordion and one muted violin. The transparency of sound convincingly demonstrates how this famous Prélude is a miracle of composition.

In Debussy’s Première Rapsodie, a six-minute delight for solo clarinet with accompaniment of five strings, flute, and harp, Todd Palmer soloed with full energy and expressiveness . . . and he did the arrangement. Debussy’s original orchestral tuttis came off well, if somewhat boisterously, with double-stopped solo strings. (Debussy originally scored this morceau de concours for clarinet and piano in 1910. 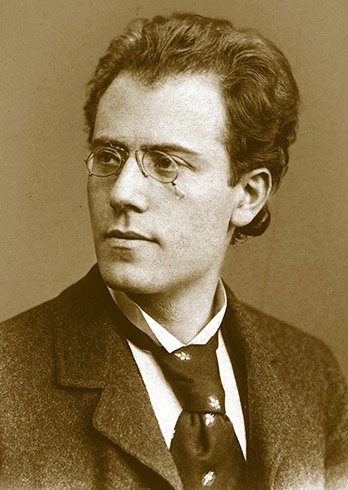 Mahler’s Das Lied von der Erde constituted the second half of a full and triumphant evening. In recent months, in connection with writing an analytical essay, I have become ever more acquainted with this acknowledged masterpiece of orchestral song, composed 1909, with Mahler’s renewal of, and inheritance from, the spirit of Schubert much more than the usual perception of Wagner. Above all Das Lied is a bittersweet work, a farewell not to the world whose future Mahler could not face, but to the memorialized past, with the hope of going forward (Ewig, ewig…). Mahler wrote to a friend that he could not have written his Kindertotenlieder (1901) after his daughter Maria died (1907); others suggested that Das Lied von der Erde could perhaps be thought of as a tribute to her, because the Kindertotenlieder loom large in the background of the later work. Mahler died before he could hear Das Lied von der Erde (premiered five months after his death, conducted by Bruno Walter). Hearing the full orchestral version, one notices the preponderance of upper-register sound, and this was also evident in the chamber version, by Schoenberg and Rainer Riehn: fl. (picc.)-ob.(Eng. horn)-cl.(E-flat cl., bass cl.)-bn., horn, accordion (substituting for harmonium), piano, celesta, percussion, 5 strings. This is really a reduced large orchestra, and it stretches a point to call it chamber music. Much of the time one felt that a larger string section was needed to fill out the solo sound and, in this instance, to hold up the bottom of everything, to add more bass clefs, despite the expert ministrations of the hard-working double bass player Charles Clements.

The cycle begins and ends with two big songs, with four shorter numbers coming in between. The very active, Richard Tucker Award-winning tenor Paul Groves alternated with versatile, rising mezzo-soprano Rihab Chaieb, creating the widest imaginable spectrum of emotion in strong, rich tones. Much of the time, though, they had to fight the instruments for proper projection—a problem I attribute to the lack of acoustic depth in what is essentially a chamber-music hall. Musically, and expressively these performances were well-nigh flawless and highly communicative. The audience showed tremendous enthusiasm.

Congratulations for the fine professionalism and dedicated expression of the entire ensemble, with special nod to Barry Shiffman, artistic director who also played the viola throughout. Earl Lee, the skilled conductor kept expert control over tempo changes and restrained dynamics (especially in the Mahler) without using a stick. Keith Horner provided well-written program notes.. I give a special shoutout to Ryan Roberts from the NY Philharmonic; he played oboe and English horn with the loveliest colors and warmest expression I have heard anywhere in years; this matters greatly in the final song, Der Abschied (The Farewell). Afterwards he explained that he facilitated the low B flat on his English horn, which I heard plainly, with a special extension. This obviated the solution Mahler offered in his famous footnote in the score of Das Trinklied des Jammer der Erde “If there is no low B flat, play B.”