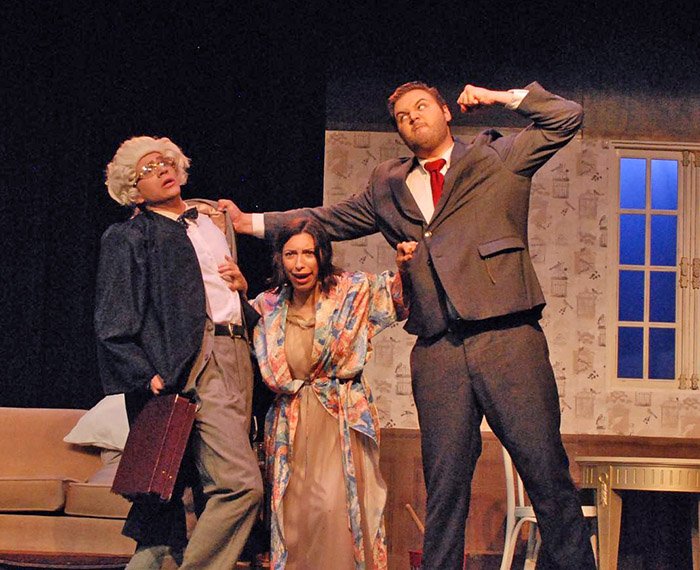 Cape Cod’s  College Light Opera Company, now in its 54th summer season, encompasses two dozen student and pre-professional singers, nearly that many other musicians, and a large production staff. It offers nine different productions in two months, and mounts several performances each week in the utilitarian, 300-seat Highfield Theater in Falmouth. (The hard-working but unpaid performers receive room and board). This year’s program names 450 contributors who donated more than $400,000 to allow for sold-out houses at moderate prices. This bespeaks a substantial and loyal base of Cape residents, visiting retirees, and vacationing collegians. The 46-page program booklet contained writeups on The Gondoliers; Kiss Me, Kate; No, No, Nanette; All Shook Up [an Elvis Presley operetta]; Die Fledermaus updated in English; Cinderella by Rodgers and Hammerstein; Assassins (Sondheim); The Scarlet Pimpernel; and She Loves Me (Bock & Harnick).

Die Fledermaus, an irresistible operettic confection of Viennese Sekt mit Schlag, tells a story as silly as any of its G & S descendants, and as a successful dramatic Auswirkung points to a subsequent century of American and European musical comedy. For some, adding slapstick to the original silliness often makes good musical as well as theatrical sense. The weekend’s mise-en-scène, nominally in New York rather than Vienna, could just as well have been Park Avenue or Coney Island, and the wonderful mixture of costumes might have come from Goodwill and the back stairs of Saks (Prince Orlofsky first appeared seemingly swaddled and coiffed as Princess Turandot, and a few minutes later in an evening suit, complete with cigar which he extinguished in a champagne flute). A lampooning tendency in the Italian-opera manner as well, felt not only appropriate but also entirely successful. The overweening bel canto role of Alfred included three quotes from Verdi and two from Puccini, and perhaps more that I didn’t catch. Overall I especially admired the bright singing, the vigorous and well-unified choral ensemble, and lively choreography.

With a compact beat Tiffany Chang ably led the14 players, one each violin, viola, cello, and bass, within the tiny pit. No complaints about the individual players, but had I been the orchestra manager I would have tried to find a way to sacrifice the single trumpet and trombone and include at least two more violins to prevent scrawniness of string tone.

After the curtain calls, the company wound its way directly through and among the exiting audience, greeting family and friends. I came away from the three hours much admiring the abundance of youthful talent and thinking that the College Light Opera Company couldn’t be a nicer or more efficient way for up-and-comers to spend a summer of learning, training and performing.

Executive and Artistic Director Mark Pearson has been ably running CLOC in Falmouth for the last 19 years, a developing a corps of artistic administrators as well as performers. We will be hearing more from all his charges.