As a heat wave continued to stifle the east, the Apollo Ensemble of Boston, led by conductor Elias Miller, soldiered on admirably this past Saturday afternoon with a finely worked outdoor performance of Brahms and Tchaikovsky at the Great Brook Farm State Park Pavilion in Carlisle MA. The surprisingly charming setting placed the orchestra in a large, covered patio focusing the sound in the sweltering plein air. Ample shade allowed a good-sized audience to avoid the searing heat of the midday sun.

The Tragic Overture of Johannes Brahms began with a pair of severely struck chords and moved into restless and at times almost terrifyingly haunted phase, relieved twice by a sweetly sentimental second theme that could not hold out against the harmonic and rhythmic turbulence that dominated the piece. Its pathos pointedly accuses us of wasting our allotted days and warns that our fate is at hand. Richard Wagner dismissed Brahms as a “posthumous composer,” but for all of Wagner’s bombast, he never wrote anything approaching the very human angst that Brahms so effortlessly depicts in this piece. Miller and the Apollo Ensemble gave a worthy interpretation in challenging conditions with especially fine emphasis on the rhythmic tension that Brahms loved to display between duple and triple meter figures playing against each other. The group handled the more tender portions nicely, but excelled in the hounding main theme and its developments that consumed it and left the listener chastened.

The 5th Symphony of Tchaikovsky followed attacca, offering tremendously contrasting uplift. It opened with a rather gloomy yet martial tune in the winds that, similarly to the Brahms, spoke of unsettled business and pointed to much larger things. These arrived in the form of an intensely ornamented marching first theme that only Tchaikovsky could have summoned. The oft-repeated criticism of Tchaikovsky posits that rather than developing thematic material he would instead repeatedly introduce new themes and decorate them endlessly. True or not, there’s never a dull moment, and he always brings in some gorgeous romantic themes that take one’s breath away. This was certainly true in the first movement. 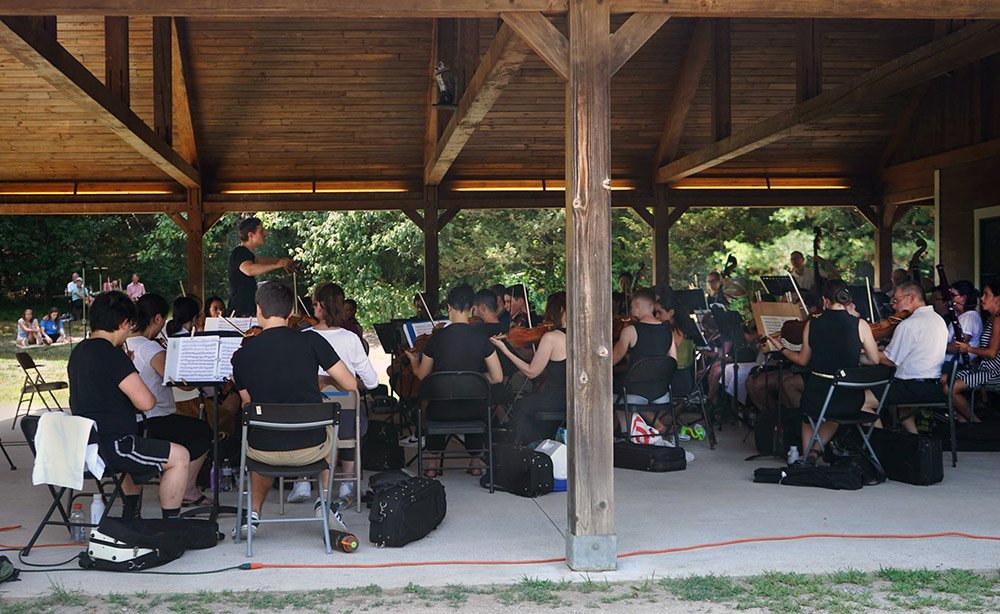 The Andante second movement began with the lower strings moving in seven somber steps from dark to light, setting the stage for one of the greatest tunes ever written for the French horn; Jessica Apollinario put it across with exquisite warmth and refinement. As the main theme circulated around the orchestra, the cellos imbued it with almost as much nobility as the horn. Another hugely romantic theme rose in teeth-gnashing intensity until the symphony’s opening  retuned in a tense brass chorale before subsiding into consolation brought to an exquisite close by a lone clarinet.

The third movement unfolded in waltz time. The strings introduce its lilting before the woodwinds add additional color and texture. Suddenly a series of fleeting 16th notes interrupted the waltz, setting the ensemble off on a wind-blown course. After the violins initiate these gestures,  they passed throughout the orchestra with inventive decoration.

A great processional hymn steadily built throughout the orchestra at the start of the Finale;  a cataclysm in the timpani introduces a wildly tempestuous moment  before giving way to a wonderfully stirring theme in the winds. Flowing strings answered until getting caught up and subsumed by a brass cannonade. One took away the impression of a chaotic battle in mid fight…crazy music which the orchestra handled with great aplomb. Surging tumult died back only to all be revivified. The timpani and brass brought it all crashing down only to rebuild momentum with racing strings to yet another timpani and brass climax, which rolled out the rug for the original-sounding processional tutti. More wild invention in the final presto brought the virtual curtain down with an authentic crash. What a finish and what a piece!

The Apollo Ensemble and Miller (conducting the Tchaikovsky from memory) positively scintillated in these supple yet intense traversals under arduous conditions. Bravo.

A part- time cellist, who’s worked for Gentle Giant Moving for 25 years, Paul Roth plays cello in the  New Philharmonic  Orchestra in Newton, the Brookline Symphony and the Mercury Orchestra.