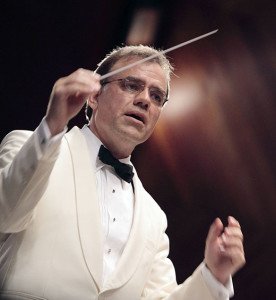 Is this is a good year to bring out the big guns, and the most recognizable names?

Yes in part. Landmarks programming has always been a mix of the great classics and more adventurous repertoire. This season has plenty of both. One thing you’re probably noticing is that there are simply more Landmarks concerts than we’ve had in the recent past, so five full programs at the Hatch Shell rather than four, which is what it’s been the last few years.

It’s a truism that well-known works bring out the biggest crowds. And that works great for us. We have a top professional orchestra to deliver these cherished works, performing for free right in the heart of the city. It is a tremendously exciting thing that the generosity of people throughout the Boston area is what makes this possible. The entire enterprise is a gift to the city.

But Landmarks is also committed to principles of equity and inclusion. Since the field has been so dominated by white males of European descent, that means each year we commit to performing works by women—our season opens with a great overture by Ethel Smyth—and by extraordinary composers of color. We told the story of Ethel Smyth’s activism on our 2020 livestreamed concert hosted by Grace Kelly. You can see it here at 27:42 in the video.

Black and Latinx composers make up a lengthy list of great orchestra composers. It’s just that few people know the names or the music. When you perform unknown repertoire, it means people don’t know what it sounds like—they don’t know they’re getting into. We understand, it makes it harder to commit to the evening. But the responses have been incredible to plenty of the unknown works we’ve chosen over the years.

One thing we’ve done for a while now, is to explore the very idea of Americanness. American classical music is more than Copland, Barber, and Bernstein. A great example is William Grant Still’s Second Symphony we performed last summer—it sounds like Gershwin. Totally lovable on first listen! Or the William Dawson symphony that’s coming up on August 24th this summer. We should talk about that too work in this space. Dawson’s writing is in the oh-my-god category. This is a centrally important and thrilling American work that no one knows. In fact, it appears we’re giving the Boston premiere.

You perform the Beethoven Ninth on Saturday night. I don’t think you’ve ever done that before, have you? What’s the thinking behind that?

You’re right. I think it’s the first time we’ve deliberately scheduled an Esplanade concert on a night other than Wednesday Of course, weather has sometimes pushed us off of Wednesday, usually to Thursday. And that would still happen should it threaten rain on our scheduled Wednesday concerts.

Wednesdays were chosen years ago. The thinking was that we didn’t want to create conflicts for people on the weekends, when there are so many other wonderful choices for summer entertainment and activities. But Wednesday is still a worknight for most, and the weekend is the weekend. So we’ve also always wondered what the response would be to a Saturday night concert. This year, we’ll find out. We chose Beethoven Ninth for that slot to give the choice a little bit of weight in favor of a great turnout.

You have a commissioned work scheduled on the Beethoven Night concert as well. Tell us about the composer and the commission.

The composer is Dr. Diane White-Clayton, a wonderful talent with a wide range of musical interests. She is a vocalist, pianist, composer, conductor, clinician, and speaker, trained in classical piano, gospel singing, and conducting. She was recommended to us by Rev. Emmett G. Price III who this year became my boss as Chair of the Boston Landmarks Orchestra’s Board of Directors. He has worked with “Dr. Dee” and admired her work for many years. She currently serves on the faculty of UCLA’s Herb Alpert School of Music.

The work she has written for us is called Many Mansions. It’s an elaboration of a widely performed Negro Spiritual arrangement by Dr. Roland Carter, called In Bright Mansions Above. With Dr. Carter’s blessing, Dr. Dee has turned an unaccompanied choral work into a work for soloists, chorus, and orchestra. It is scored for the same forces as the Beethoven Ninth, and is conceived as a companion to the Ninth. I was struck by parallels between the two texts: the spiritual’s text, “in my Father’s house there are many mansions” (John 14:2) compared to the Schiller poem that Beethoven set, “above the stars must live a loving Father…”

Landmarks always emphasizes work in the community, beyond the Esplanade concerts. What do you have going on currently?

There’s a lot going on, under the umbrella of flagship accessibility program, Breaking Down Barriers. Creating a concert experience that values universal access is a foundational Landmarks Orchestra principle. It is the reason the orchestra was among the first arts groups, and the only orchestra—to be awarded the UP designation from the Massachusetts Cultural Council, recognizing organizations who prioritize accessibility and access in all they do.

This past year, we’ve added a wonderful new component: Music and Memory. The program offers live chamber music in memory care facilities, providing comfort and respite to those living with memory loss and those who support them. The response has been ecstatic.

The biggest new initiative—one that will involve the entire organization, including the full orchestra on August 17—is our project in partnership with the Hyde Square Task Force. It builds on a model developed in previous collaborations with Camp Harbor View, Zumix,

Boys and Girls Clubs of Boston, and the Mattapan Teen Center.

Landmarks has engaged Fabiola Méndez, a Puerto Rico-born composer and performer with extensive experience working with young musicians. Ms. Méndez will work with a select group of music students from HSTF to co-create a musical work to be performed by Landmarks in the summer of 2023. The work is likely to include the student-composers as performers, as well as young dancers and other students from HSTF. Ms. Méndez will mentor the students in the process of cultivating and refining their musical ideas, then integrate their ideas into a cohesive original work. She will work with the students both in person and virtually throughout the 2022–23 school year.

Landmarks is developing this program with Ágora Cultural Architects, a consulting group that increases Latinx cultural visibility through the arts. The Orchestra has also been working with Ágora’s co-founder, Elsa Mosquera Sterenberg, since February. As a result of the HSTF initiative, the Orchestra will be able to expand community-based concerts and musical projects elsewhere across the Greater Boston area, including in neighborhoods rich in Afro-Latin culture and heritage.

The program features mostly famous music—works that have become well known because they tell memorable stories memorably. I’m talking about pieces where the narrative is told entirely in the music. It’s “a way in” for the average listener. Since Access is such an important part of what we do, allow me a little story here if you would, about storytelling and approachability.

Dr. Carlton Gamer— an extraordinary musician, composer, and teacher—is a friend of mine who has taught at Colorado College since 1954. One day I asked him, “Are your students today as equipped to hear what’s going on in a piece of music as they were a generation ago?” He answered without hesitation: “Far less so. They don’t read music. They can’t identify the instruments. They have no idea who Beethoven was or when he lived, much less how many symphonies he wrote.

“However,” he continued, “if there is a story, a poem, or a narrative they can relate to, then what they hear, and what they say about that music, is infinitely richer than it was in the past. Young people today know how to make connections; they know how to connect the dots. That skill is more highly developed than ever.”

That’s the purpose of our opening night concert: using storytelling to help make great music relatable. There’s nothing to decode. Your listening can be guided by what you know of the story. It’s another kind of accessibility, which has been a Landmarks priority from the beginning.

Comments Off on The Maestro Opines