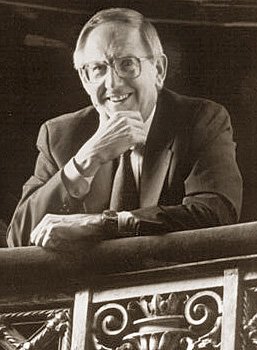 As the last of the grand impresarios in our midst, Walter Pierce strode Boston stages as a gentle colossus for 30 years until his retirement in 1996. He could always be seen in the lobbies before and after concerts to take the pulse of the crowds. And he presided over the transition from the for-profit Aaron Richmond Celebrity Series to a non-profit mode for 18 years subsidized by the Bank of Boston. Walter’s two successors comment on his role in transforming Boston’s Arts scene. The official obituary follows their essays.

Celebrity Series President and Executive Director Gary Dunning: It’s sad to lose Walter, but clearly he’s given us much to remember and celebrate.

The late 60s and early 70s saw a broad sea-change in how the performing arts functioned in the United States. Up until then, arts patrons could largely carry the burden of keeping arts organizations afloat. When I started in the business (1978), you could still feel the remnants of that old model where lead patrons like Eleanor Belmont at the Metropolitan Opera, Lucia Chase at ABT and Lincoln Kirstein at New York City Ballet could almost single-handedly handle financial challenges.

Meanwhile, new revenue sources appeared. Congress authorized the National Endowment for the Arts in 1965. The Ford Foundation, in this case led by Mac Lowry, helped establish regional centers for ballet companies, orchestras, theater companies and performing arts centers. The quid pro quo, however, was that this revenue came with strings attached, mostly in the form of corporate models such as governing boards, finance and administrative structures, professional management (the phrase arts administration began to appear in business schools).

Whether the for-profit model simply became untenable, or the lure of new money and government and corporate imprimatur became too attractive, the transition to non-profit organizations was on. This also caused more competition for Celebrity Series, since smaller cities in the region were then starting or growing their own presenting organizations — almost all as non-profits.

I first met Walter at the Wang Theater as company manager for American Ballet Theatre when we came to one of the first Wang seasons. I would say it was in the fall of 1982, but that’s almost a guess. Misha Baryshnikov was Artistic Director, and we did a couple performances of Giselle and some mixed rep. I met Walter again when I had gone to Houston Ballet and I was trying to talk him into booking us.

One of my first mentors was a gentleman named Herman Krawitz, who was assistant general manager of the Metropolitan Opera under Sir Rudolf Bing. When I took the Celebrity Series position, Herman called me to congratulate me and said, “Do you know I gave Walter Pierce one of his first big jobs?” Herman had hired Walter to be the promoter for the annual tour of the Metropolitan Opera to Boston. (The Met tour was a pretty big deal back then and was still active when I took my first job at ABT. We were performing at the Met only because the opera company was on the road. Herman was then Executive Director of ABT.)

I told Walter that story once and he was delighted that Herman would remember him. He said he had a great time working with the company, for several seasons, I think.

Gary Dunning holds a B.A. from Princeton University and a Master’s Degree from the London School of Economics and Political Science. A veteran of performing arts administration, Gary began his career at American Ballet Theatre (ABT) before becoming Executive Director of Houston Ballet in 1986. He returned to ABT as Executive Director in 1992 and joined the Big Apple Circus as Executive Director in 1996. He became the fourth President and Executive Director of the Celebrity Series of Boston in its 75 year history in 2011. He is married to Anne Dunning and they live in Boston. He has served and chaired numerous panels for the National Endowment for the Arts, the Texas Arts Council, and the New York State Council on the Arts. He also served as Chairman of the Board of DanceUSA, a national service organization for professional dance, for six years. In 2013, he served as Co-Chair of Boston Mayor Walsh’s Transition Committee for Arts and Culture. He currently is a board member of ArtsBoston.

Marty Jones, former Celebrity Series Executive Director: Aaron Richmond founded the Celebrity Series in 1938, though he began as an artist manager and solo presenter as early as 1924. Over the course of 12 years he presented such notable artists as Sergei Rachmaninoff as well as the Cleveland Orchestra. He also served as the New England regional representative for all of the great Russian impresario Sol Hurok’s tours. Sol was also well connected with Columbia Artists Management Inc., which I reference below.

The Series dates its founding to the 1938-39 season, the first year that Aaron Richmond organized his concert season into a subscription series, the first of its kind in all of the performing-arts genres You could say subscriptions started with the Celebrity Series, but others will argue that point.

Post WWII, three significant challenges had faced concert presenters: 1) the government began to tax entertainment tickets; 2) the advent of television offered people a free entertainment alternative; and 3) Columbia Artists Management Inc. (CAMI) held a near monopoly on all notable concert artists and, thus, could charge whatever they wanted for bookings. Concert promoters were now starting to lose money. By affiliating with BU, Celebrity Series could save a minimum of 25% on all print advertising —phenomenal savings which not only allowed a wider profit margin, but also provided an opportunity to start raising money to support the work. Of course the Celebrity Series was not the first non-profit presenter. The University Musical Society at U of Michigan, which was started in 1879, today stands as the oldest college presenting organization in the country; there are now many. The New York Philharmonic was instrumental in leading Congress to agree to make non-profit entertainment institutions exempt from taxation on tickets.

In 1949, Aaron Richmond became a founding member of the National Association of Concert Managers, Inc., (now known as ISPA, the International Society of Performing Arts) whose members were all for-profit concert promoters. They met annually to share stories of their trials and tribulations in the business, and when the post WWII economic changes occurred, some rebranded their organizations as non-profits while others became artist managers and began to recruit CAMI artists to jump ship and be represented by new management that would devote more time to getting them booked.

Walter retired in 1996, and I served as President & Executive Director until my retirement in 2011.

Marty Jones is widely credited with saving the Celebrity Series by changing it from a struggling “mom and pop presenting organization” operating under the auspices of other nonprofits into New England’s largest independent nonprofit arts presenter. She expanded the Celebrity Series’ artistic and education programs, eliminated a half-million deficit, and doubled the Celebrity Series budget while raising $7.5 million endowment. A performing arts executive of national repute, Jones has been a candid and astute observer of the local and national arts performing arts landscape and its evolution over the past 25 years (Arts Fuse)

Walter Pierce, a storied arts administrator and impresario who stewarded Celebrity Series of Boston for over 30 years, passed away on July 7, 2022 at the age of 91. During Pierce’s tenure, which began in the 1950s when he was hired as a freelance publicist working under founder Aaron Richmond and lasted until his retirement in 1996, the organization evolved into one of Boston’s most enduring nonprofit arts organizations. Pierce championed beloved artists such as Alvin Ailey American Dance Theater, cellist Yo-Yo Ma, pianist Vladimir Horowitz, tenor Luciano Pavarotti, violinist Itzhak Perlman, soprano Renee Fleming, Jazz at Lincoln Center Orchestra, and many more.  His long career at Celebrity Series can be summed up in the words of longtime Boston Globe classical music critic Richard Dyer, “Walter Pierce always did know how to do things right.”

Following his discharge, Pierce moved to New York City, working for the advertising firm of Ruthrauff and Ryan before joining the theatrical publicity firm of Max Eisen. While with Max Eisen, Pierce promoted Broadway and off-Broadway shows, including Yiddish Theatre productions, and the summer tent productions of St. John Terrell who conceived ‘Broadway under the big top,’ known as Music Circus.

Pierce returned to Boston to pursue a master’s degree in Public Relations at Boston University, following which he joined the South Shore Music Circus, a summer tent theater in Cohasset, MA, as publicity director. During Cohasset’s off-season, he freelanced as a publicist promoting the Boston premiere of Federico Fellini’s film, “La Strada,” as well as being the lead promoter for the Metropolitan Opera’s annual tour to Boston.

Following Mrs. Richmond’s retirement, Pierce assumed the sole managing directorship of the Celebrity Series and continued in that capacity until his retirement in 1996. During that period, Pierce expanded the number of presentations and broadened the range of programming for Celebrity Series. Pierce was appointed Executive Director of the Wang Theatre in 1984 and brought the Series with him, to then be renamed as the Wang Celebrity Series. In 1989, the Celebrity Series ended its affiliation with the Wang Center, and was incorporated as an independent, non-profit organization under Pierce’s leadership.

At Pierce’s tribute gala concert in Symphony Hall in 1998, a distinguished array of artists participated, including Emanuel Ax, William Bolcom and Joan Morris, Natasha Thomas-Schmitt of the Alvin Ailey American Dance Theater, the Juilliard String Quartet, Robert Mann, Yo-Yo Ma, Jean-Pierre Rampal, Isaac Stern, and Dubravka Tomšič. Among those in attendance at the gala were famed soprano Leontyne Price and Judith Jamison, Artistic Director of the Alvin Ailey American Dance Theater. It was announced at the tribute that seat P1 in Symphony Hall was endowed in Pierce’s name, and that the Celebrity Series inaugurated the Walter Pierce Annual Performance Fund to support programming and community activities.

Pierce also served as president of the International Society for the Performing Arts as well as on several Greater Boston performing arts trade and service organizations.

Walter is survived by his wife, pianist Margaret Ulmer, his sister Tess and family, and his daughters Melinda Pierce and Susannah Keefe and their families from his first marriage to Betty Ann Pierce, whom he met and worked with at the Celebrity Series.

Burial will be private at Mt. Auburn Cemetery. The Series is planning a celebration concert for Walter in the fall of 2022. In lieu of flowers, donations may be made to the Celebrity Series of Boston Walter Pierce Annual Performance Fund.