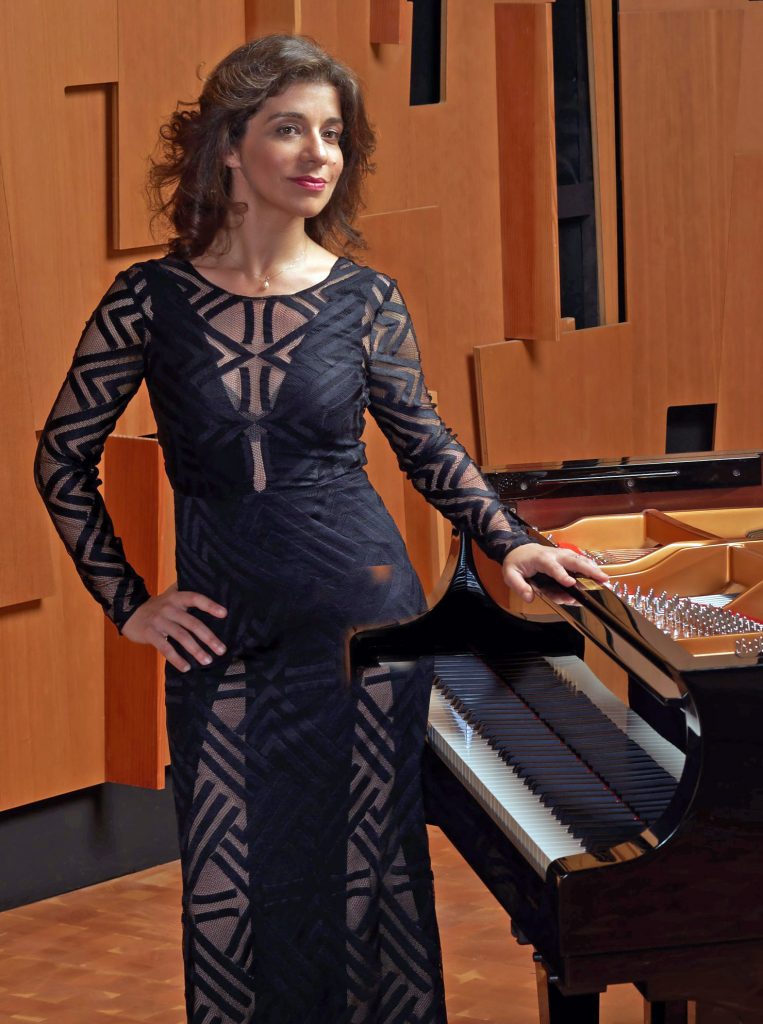 The Inn at Castle Hill, with elegant gardens and stunning views of Narragansett Bay, served as the backdrop for Newport Classical’s return performance Thursday evening of Ukrainian-born American pianist and world-renowned professor Inna Faliks, a Yamaha artist who last visited Newport in 2017 performing her Polonaise-fantasie: The Story of a Pianist, a recital and monologue which tells the story of her immigration from Odessa to the United States. During the pandemic Faliks produced a video podcast series from her home called Corona Fridays, which featured music new and old, with words, and programming for children. For Faliks, music is about more than just playing it, which she does exquisitely. She “reimagines” it ― the title of several of her “Reimagining” projects―pairing it with poetry, theater, and bringing other artists together for these for these pairings.

Thus, it was quite natural for her entrance on stage to be a “more than” event, as she expressed her moving testimony of how grateful she was to be performing in person again from all her “Reimagining Series” created during the pandemic with plans to grow and continue them. To be able to return to Newport for her, meant “more than words could express.” Through this short introduction to herself and the music, she established a deep human connection with the audience, beyond being just a pianist and performer. She then opened her program with a piece not listed on the program, Ballade in Black and White by the Odessa-born composer Jan Friedlin, who emigrated to Israel in 1990. Friedlin served as a mentor to her and composed this piece in 2005 as a gift to her, which she executed most beautifully, gracefully sweeping through its musical landscapes with eloquence, passion, and sensitivity to its ever-changing moods, phrases, and the space between them, like an actor in a play, moving beyond the lines to create a drama that tells a story.

She then continued with Schumann’s four movement Piano Sonata in G Minor — did I say Clara and not Robert? For Faliks, Clara speaks “with individuality and brilliance.” Her Schumann Project, of which volume one has been recorded, will record all of Robert Schumann’s piano works and pair them with Clara’s. (On her album this work is paired with Robert’s Symphonic Etudes.) Clara’s sonata, a gift for her husband, was written just a few years after Robert’s own Sonata in G Minor, and follows the same schematic, although Clara’s work remained unpublished until 1991. While sharing a common tonal language, each composer shows a preference for their own individualistic phrase-shapes. Clara’s writing in this sonata is less dense than Robert’s, less frenetic, but shows greater clarity and cohesion. She borrows from other works, as does he, but this was common practice in their time, and rather than showing a lack of ingenuity, provided for a sense of wholeness and continuation, as each perfected musical idioms that became part of their trademark “signatures.” The expressive adagio shares many similar phrases and intervallic connections with the corollary movement in Robert’s sonata. Falik’s beautiful singing tone and elegant phrasing inspired a nearby songbird who vied in competition, both expressing something of the eternal beauty that each of them sought to express.

As compelling as the first half of this program was, the second half of the evening proved even more so. Inna Falk’s “Reimagining” of Ravel created a series of commissions based on and paired with Ravel’s Gaspard de la Nuit, of which Faliks creatively remarked that the constantly repeated bell-tolls of work’s second movement (Le Gibet), represented the first attempt at minimalist music, a term which would not come into vogue until more than a half-century later. The commissions were to composers Paola Prestini, Timo Andres, and Billy Childs, each of whom chose a separate movement of the Ravel to “reimagine.”

Paola Prestini’s Variations on a Spell consisted of two brief sections entitled Water Sprite and Bell Tolls. The work was specifically inspired and contains reshaped bits of Ondine (Water Sprite), the whole of Gaspard de la Nuit, and the poetry which inspired Ravel by Aloysius

Bertrand in his collection titled Gaspard de la Nuit, fantasies a la manière de Rembrandt et de Callos of 1836. (Ravel wrote his work in 1908.) Prestini’s work was minimalist and colorist, evocative of Ravel’s sound enveloped in a wash of impressionistic waves of sound-color, but without the dark brooding found in the Ravel work. Faliks described the Prestini as “fun to play” and brought out its light and repose.

Timo Andres’s Old Ground, inspired by Le Gibet (The Gallows), is also a minimalist work with similar atmospheric tolling bells, but transformed for our time and place by recalling Billy Holliday’s Strange Fruit, depicting the lynching of persons of color in the south, while Billy Childs’s Pursuit recalled not only the impish Scarbo of Ravel, but also the wild and frenetic running of a black man, specifically the killing of George Floyd. This movement was performed with tremendous dexterity by Faliks, but never lost sight of its emotional context.

The suite of re-imagined Ravel inspired commissions was followed by a complete performance of Ravel’s Gaspard de la Nuit, one of the most difficult works of piano literature delivered in a dazzling and scintillating performance. Faliks is a piano virtuoso of the highest order who performs with power and vigor, fully cognizant of the musical value of even the most demanding technical passages and never failing to execute them flawlessly, always in control, and never losing the character, expressivity, and dramatic impact of the music. Her amazing technique is matched by a deep and reverent musicality, passionate and inspiring, living up to her desire to be “more than…” For an encore the audience was treated to Liszt’s La Campanella. Inna Faliks is a personality who deserves to be explored and savored over a long period of time. One can start with a purposeful strolling through her website.

Comments Off on Fantastie and Monologue in Newport