Black Oak Ensemble’s affirmation of the importance of six Holocaust composers began Wednesday before a substantial gathering of diverse members of Rhode Island’s Jewish community along with the larger public and patrons of Newport Classical in Temple Shalom, a Conservative synagogue in the Newport area for a moderated discussion with Adam Greenman, President of the Jewish Alliance of Greater Rhode Island, Barbara Wahlberg, VP for Education at the Sandra Bornstein Holocaust Education Center in Providence and a Teaching Fellow of the United States Holocaust Memorial Museum in Washington D.C., and the Chicago-based Black Oak Ensemble — violinist Desirée Ruhstrat and her husband cellist David Cunliffe teaming up with viola player Aurélian Fort Pederzoli — to discuss the significance of the repertoire being performed from their recent album. ‘Silenced Voices’ features six composers silenced by the Holocaust. Rabbi Daniel Kripper of Temple Shalom welcome the afternoon gathering and stressed that this music expressed the indomitable spirit of humanity as “a source of hope, light, and joy”. That spirit and these compositions survived the Nazi Holocaust, even if their creators did not.

The artists’ history with this repertoire began with their discovering some of it in Budapest. Additionally, violist Perderzoli’s mother, a history teacher from a Sephardic family, devoted her life to educating the young about the Holocaust. Black Oak Ensemble has been performing these works throughout Europe, including a concert at Terezin where some of the music was created. Despite the acclaim they have received for these revelations, the notes claimed that Newport performance marked the first American performances of all six of the composers represented on the album*, all but one of whom perished in the Holocaust. The artists dedicated the event in part to the memory of Desirée and David’s neighbor and friend Jacqueline Sundheim, murdered in this week’s Fourth of July Highland Park shooting, a poignant reminder that hatred persists.

The mood at the subsequent concert ran from dark and brooding to dances filled with joy and lifted with humor. Many of the pieces were smuggled out and hidden in attics. The work of bringing out this material, publishing and performing it requires bold enterprise. One such enterprising entity, Orel Foundation, is headed by conductor James Conlon and Robert Elias, who contributed to the notes for the concert as well as on the album; its website contains numerous articles, biographies and links to the repertoire.

Dutch composer Dick Kattenburg penned his youthful, jazzy, humorous and at times nostalgic String Trio at age 19; six years later he perished, probably at Auschwitz. Hungarian composer Hans Krása composed his Passacaglia and Fugue in Theresienstadt shortly before his demise in Auschwitz in 1944. The thematic motif reminds one of a Wagnerian leitmotiv with Hungarian flavorings; its passacaglia and fugue form seemed infused with the traditional Magyar lassu-fris, the traditional Hungarian dance characterized by a slow and rhapsodic opening followed by a fast dance. Some of the frenetic passages suggest the trains that continually ran into the camps. Fellow Terezin inmate Gideon Klein penned his Trio for violin, viola, and cello shortly before his deportation to Auschwitz where he perished just a few days ahead of the camp’s liberation in 1945. A theme and variations section on a Moravian folksong recalls a caged bird yearning to be free. It contains intense pathos, the violin often in the lowest registers meshes with the viola in chords deep and sonorous. Klein, like Krása, often included programmatic and symbolic references, although Robert Elias and the musicians themselves suggesting that the trio can be enjoyed for purely musical values.

This repertoire also signifies a revival of the string trio, which largely fell out of favor in the 19th century as chamber groupings tended to grow larger. Black Oak commits itself to this literature and has commissioned works to celebrate it.

Pál (Paul) Hermann’s one-movement Strijktrio, from the 1920s, opened the second half with lyric chromaticism in a very tight and compelling traversal of some of the most difficult passagework offered by this gifted threesome. Sándor Kuti’s haunting and evocative 1934 Serenade No. 3 for String Trio followed; its final movement, a quiet lament whose final note is an unresolved and widely spaced dominant seventh chord, elicits unsettled feelings while offering quiet hope. The entire evening’s repertoire felt intimate and elusive, with subtle and fluid shifts in tempo, meter and phrasing. These players showed ease and comfort, as if they had been living with these pieces for a very long time, even though they constitute recent discoveries. 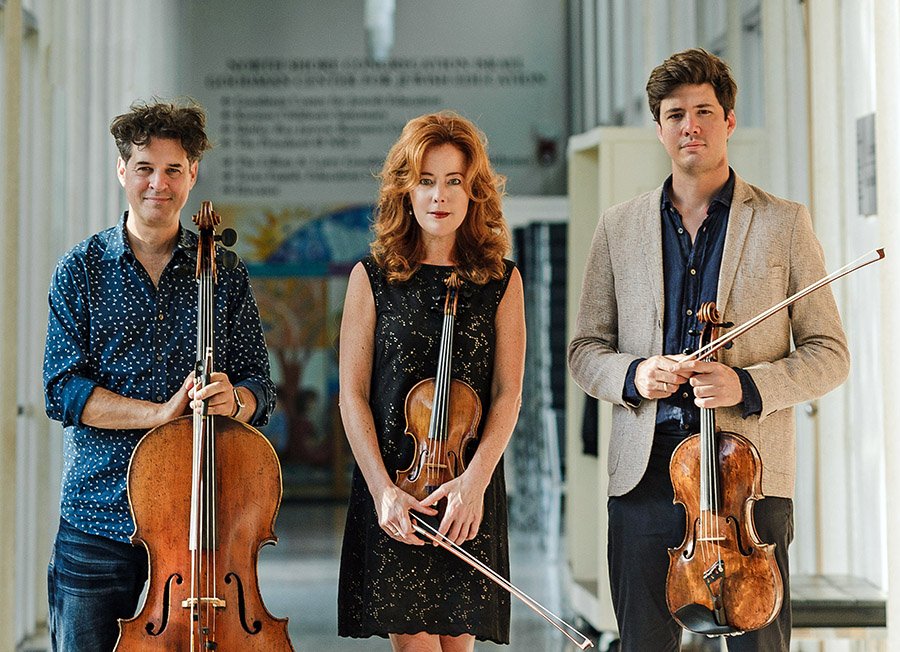 ‘Silenced Voices’ includes the world premiere recording of Géza Frid’s String Trio, op. 1, which concluded the live selections from that disc. Frid, a student of Budapest’s Franz Liszt Academy, as were all the composers in this second half, grew up in the border region of Hungary and Romania rich in its folk music traditions and rural instruments such as hurdy-gurdy and bagpipe, whose sounds, drones, and rhythms influenced this early example. Forced to relocate in the Netherlands, Frid managed to survive the war and eventually received both citizenship and recognition there, where he died in 1989.

Bach’s Aria from the Goldberg Variations served as a front and back cover for the “Silenced Voices” within. Dimitry Sitkovetsky arrangement summoned a very moving rendition which transported us in and out of the deeper and darker world of the silenced and revived realm. Black Oak Ensemble’s dramatic stage eloquence and bold advocacy convinced us that these pieces deserve to join the standard repertoire.

We note with thanks Newport Classical’s sponsorship of both the concert and the afternoon lecture, affirming the value and resilience of hope and humanity in the face of hatred and evil. The Bazarsky Family Foundation helped to fund these events, and generously supports the presenter.


*Boston’s Terezin Music Foundation also preserves and performs music written by composers imprisoned in the Terezin concentration camp. We note that its concerts have included two of the composers on this concert: Gideon Klein and Hans Krása.

Comments Off on Reviving ‘Silenced Voices’