A major operatic event, depicting a tumultuous journey from traumatized child to prophet of Black Nationalism via detours as zoot-suited cool-cat, prisoner, hustler, victim of hustling, and pilgrim to Mecca can be encapsulated in the title character’s name changes from Malcolm Little, through Malcolm X to el-Hajj Malik el-Shabazz. In composer Anthony Davis’s unflinching telling with librettist Thulani Davis (story by Christopher Davis), the commanding preacher swept across a violent time (not unlike our own) embracing Black separatism, the Back to Africa movement, and grudging coexistence as evinced by sermons, slogans, mantras, ultimatums, uplift, and anger. In X — The Life and Times of Malcolm X (1986), Davis’s musical languages perfectly evoked the title character’s seething and charisma. According to the publisher G. Schirmer:

X features a dark, non-tonal palette, complex, shifting rhythmic patterns, and poignant lyricism; it is influenced by classical, popular, and non-Western sources. Examples of historical African-American music, including swing, scat, modal jazz, and rap, and the libretto’s emulation of contemporaneous literary styles, help recreate the ‘sound’ of Malcolm’s era. Although X‘s score features some improvisational passages, it is constructed primarily according to traditional operatic guidelines.

We heard lots of rhythmic patterns; whether you call them ostinatos or grooves, they often went on at length and brought about almost hypnotic immersion. Some lyrical passages soared. Religious incantation took us to ancient temple practices. The music danced, and then as if guilty of its pleasures, it lectured us in more learned expressions. But I suspect the music would have been a giddy and angry jumble had it not been anchored to the texts. Davis’s angular vocal lines artfully followed spoken word cadences with brief moments approaching what passed for grand opera arias.

At the Strand Theater in Dorchester (just blocks from Malcolm’s 1940s Boston apartment) Gil Rose inaugurated Boston Musical Orchestra Project’s “As Told By: History, Race, and Justice on the Opera Stage,” a five-year series of with deep ties to mission and to Boston’s history. In front of John Oluwole Adekoje’s horizontally stretched black and white projections of often violent iconic images, the blank stage hosted 21 singers, 36 conventional orchestral players and 8 improvisers. Such was the commitment to HIP for the jazz, pop, and swing ages, that one often could not tell how the jazzy improv group and the swinging BMOP regular contingent overlapped.  Of course we heard echoes of West Side Story and Hair but Davis’s amalgam gleamed as an original, well-minted alloy.

We seconded Rose’s callouts for improv trumpeter Richard Kelly and trombonist Dave Harris. They respectively executed some memorable high- and low-flying plunge-muted riffs. The overall orchestral sound filled the tired looking 1908 vaudeville house with satisfying sonorities, and the warm but not over-reverberant auditorium allowed the singers’ words to project clearly, but the singers may have needed to force at times, since the Strand had no pit to mitigate the orchestral volume. Given that a massive AV contingent dominated the crossing aisle, I suspect that balance will not be a problem on the ensuing recording, even considering the not-inconsiderable stage business with singers entering and exiting. Spotlights followed the leads and colors morphed in the general illumination, with most of the interactions, other than Elijah Muhammed’s materializing in a decorative house box, occurring on the stage apron, .

The potentially handsome Strand needs to upgrade its game. A single ticket-taker did not suffice to admit the crowd anything close to the advertised start time. The show started half an hour late and even then, people continued to dribble in. A test patch for painting restoration showed just how glorious the house could look in fresh raiment, but the overhanging balcony presents unsolvable problems with sight lines. From the so-called mezzanine underneath it we were unable to see the supertitles and had to move to the balcony. From there the front of the stage was obscured despite the vertiginous pitch.

Davone Tines poured himself into the Malcolm persona in dominating and charismatic fashion, noble of stature and tone, though he sometimes maintained dignity when he might have exploded in rage or wept in despair. Let’s posit an intention to keep faith with the ritualized nature of a tale told in proclamations and near cantillation.

In an œdipal bit of double casting, soprano Whitney Morrison gave voice both to Malcolm’s mother Louis and wife Betty. She came across the proscenium powerfully as grieving Madonna, opera diva and a blues singer of distinction. Victor Robinson made vivid and quite disparate impressions as a jiving Street (a Sportin’ Life homage for sure) and smooth but sinister Elijah Muhammed. His tenor instrument pinged forth with perfect focus and support.

BMOP fielded a chorus that filled an essential role of amplifying the words and thoughts of the stage characters with limitless energy and clarity. And some nice solos issued from the group, especial during the Hajj scene where a call and response groove evoked ancient temple practice.

We knew that the show and the life were about to end after extras rolled a grey lectern onto the stage. Malcolm stood erect, uttered his final salaams, and waited for the bullet. We heard no shot nor did any blood spurt from a squib…a blackout signaled the end to Malcolm’s tumult.

While he eventually rejected Elijah Muhammed’s claim that devil Yakub created tormenting Whites 600 years ago, Malcolm never ceased to believe that his people could rise as a Black nation within a White nation. And if he hadn’t been shot (apparently) by Nation of Islam hit men at the Audubon Ballroom in early 1965, who knows how he would have continued to reinvent himself …perhaps to a partnership in non-violence with Martin Luther King, or perhaps in a devilish rapprochement with Louis Farrakhan. If he had lived another six months, he might have taken vindication from the Civil Rights Act of 1965, or he might have considered it pap from enslavers.

That X can summon a diverse full house of over 1000 to a neighborhood theater in Dorchester testifies to the secure niche the 16-year-old show already occupies in the opera canon as well as to BMOP’s marketing skill and commitment to outreach. 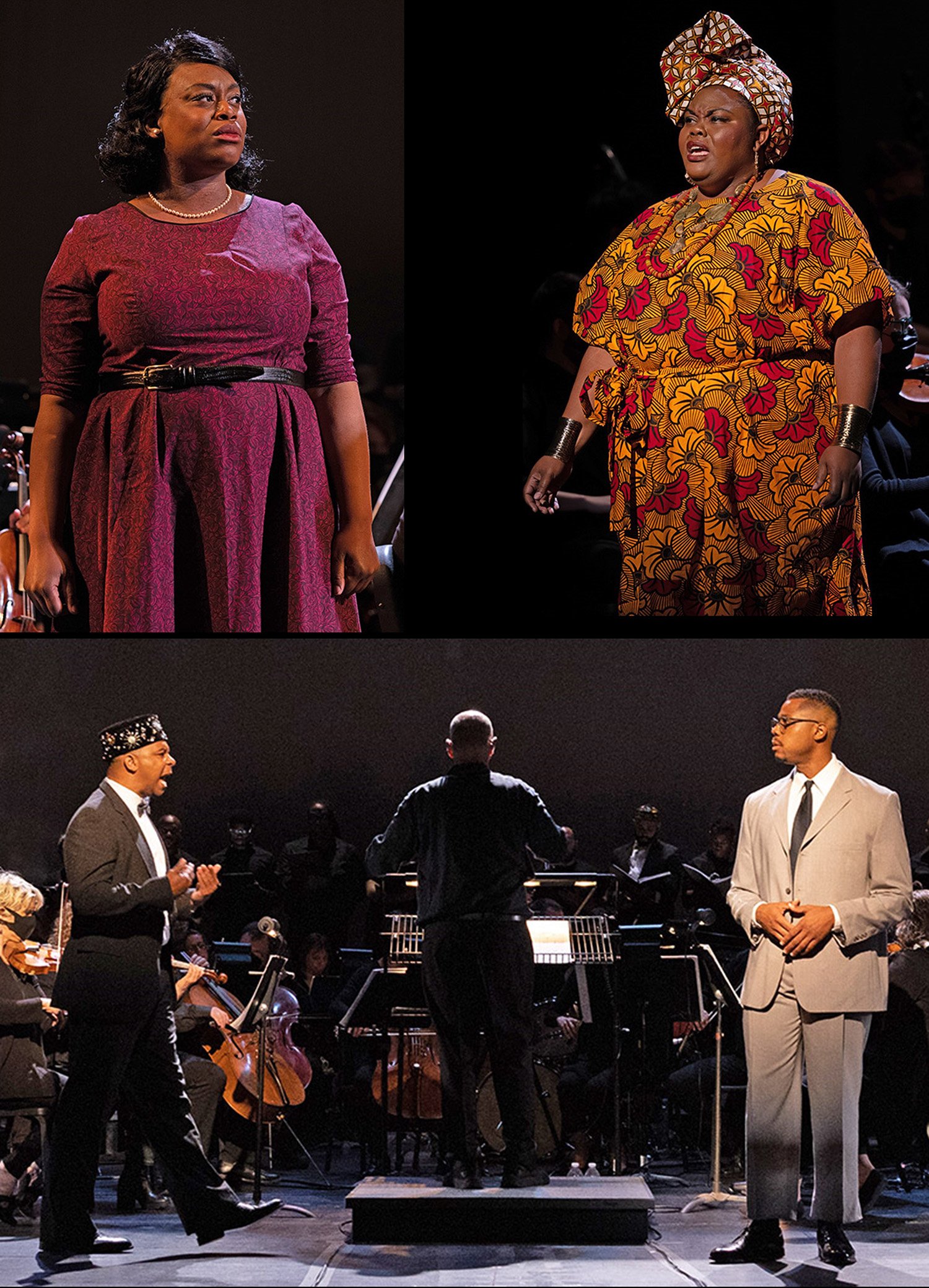 And here is a shot of the house taken by the author. Why were all of the projected images stretched? 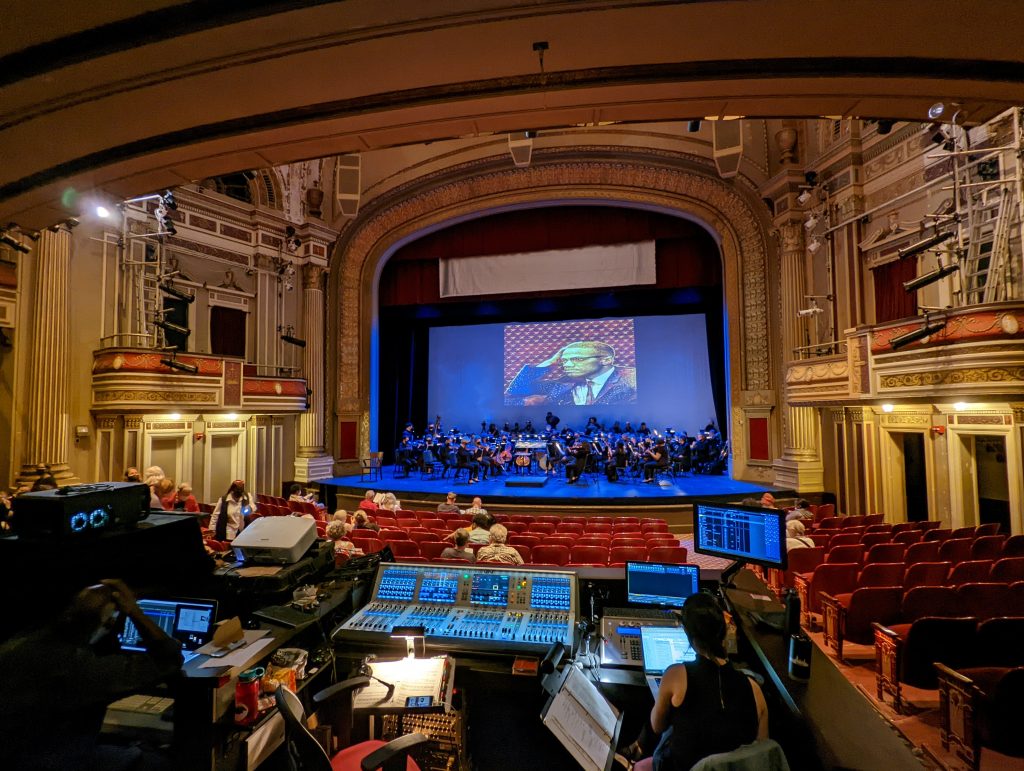 Comments Off on BMOP Inaugurates “As Told By…”