As an organist and dedicated repertoire hound, I like to think I have prowled around quite a few obscure corners of the organ literature, but on Sunday Gail Archer, in her recital at the Cathedral of the Holy Cross, Boston, revealed to me a nationality of organ music I hadn’t previously known existed: that of Ukraine. However timely this choice, Archer sensibly included some better-known repertoire lest an entire program of Ukrainian (or otherwise unknown) music prove too esoteric even for fellow organists. She also emphasized women composers.

The Prelude and Fugue in E Minor (“The Wedge”), BWV 548 provided a noble beginning to the program though one had to be satisfied with the “big picture” of the piece: Archer’s swift tempo would have worked better in a drier acoustic and on a more Baroque-style organ. Given the reverberant ambience of Holy Cross and the Romantic aesthetic of its 1875 Hook and Hastings organ, a number of details of Bach’s especially ingenious polyphony were swallowed up by the room. The extensive downward cascading runs of the prelude tended to coalesce rather than playfully imitate each other; the rhythm of the fugue’s second idea, so startlingly different from the regularity of the main subject, was hard to perceive until Bach united the two themes. Nonetheless, Archer’s technically flawless performance had drama and excitement and gave the advanced harmonies of both prelude and fugue their due. Bach’s chorale prelude An Wasserflussen Babylon (By the Waters of Babylon), BWV 653, however, was successful on all counts. A gleaming 8’ harmonic flute provided a beautiful setting for the chorale which was heard on a solo reed in the tenor. The warm caress of this work was complemented by the organ registration and acoustic, and the final descent of the solo reed to the depths was a moment to treasure.

The chorale preludes of Johannes Brahms’ final opus are, of course, genuinely Romantic works. In Brahms’ first setting of O Welt, ich muss dich lassen (O World, I now must leave thee) Archer employed the broad, rich foundations of this instrument, warmed by the inclusion of the 8’ Oboe stop. The reflective tempo suggested a contented acquiescence to the end of life. In Mein Jesu, der du mich (My Jesu, who calls me to eternal bliss) the performer’s moderate tempo and clear registration allowed the details of Brahms’ counterpoint to emerge as well as the many flavorful harmonies. Her well-judged crescendo—using swell boxes as well as adding stops—culminated in a powerful and triumphant conclusion.

Before the audience could get too enfolded in plush Romanticism, our artist took us into the terra incognita of Ukrainian contemporary music. The Fantasia of Viktor Goncharenko (b. 1959) utilized a tripartite structure with calm outer sections and a more agitated and dissonant middle section. While the chord progressions of the first and last sections faintly suggest organum, using parallel fourths, fifths, and octaves, the harmony elsewhere is decidedly more modern than medieval. Archer found some neoclassical sounds not dissimilar to some registrations of Jehan Alain; however, Goncharenko seems not to be noticeably influenced by any other composer. A notable trademark of his style is his teasing of the listener, keeping one guessing (usually wrongly) where the melody or harmony is headed next.

The chaconne, though a popular Baroque form throughout Europe, was particularly favored by Louis Couperin in the 17th century. Chacona, by Svitlana Ostrova (b. 1961), seems to be an homage to the Baroque with its opening chordal statement of the theme, but the appearance of dissonance and increasing complexity of the variations place the work firmly in the 21st century. Using a bluesy theme (the harmonies often redolent of jazz), Archer gave each variation on it a different mood: the first restless and questing; the second flowing but gently syncopated; the third insouciant in its triplet motion; and the last exuberant with sparkling 16th notes.

The Passacaglia of Mykola Kolessa (1903-2006), like the classic examples by Bach, Buxtehude, and Reger, initially formed variations on an ostinato bass line for the most part though later it seemed to develop other thematic ideas. With reference to the earlier examples of the form, this work seemed to stay within a comparatively narrow dynamic range of mezzo piano to fortissimo. Perhaps the most striking passage was akin to a French toccata with rapid figuration in the hands with the more sustained melody in the pedals, leading to a climax. Thenceforth, the piece tapered down to a subdued ending with the unusual touch of a major sixth added to the final minor chord. 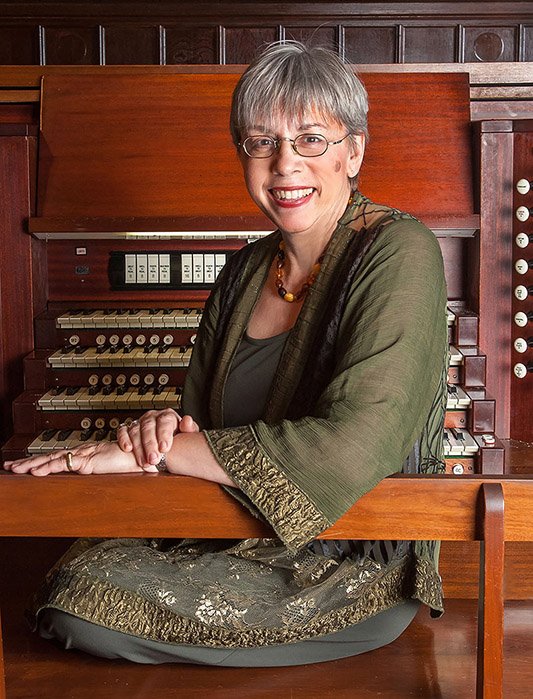 Though Nadia Boulanger (1887-1979) gave up composing while still relatively young, she of course went on to become arguably the most prestigious teacher of composition in the world for most of the 20th century. The three pieces on the program are perhaps her best-known organ works. As she studied the organ with Louis Vierne as a young woman, it is not surprising that his influence can be heard in these miniatures, particularly the opening Prelude. Despite its tortured chromaticism—for a time taking us from the tonic F minor to C-sharp minor—Archer maintained clarity during the subdued early pages, built to a dramatic climax, and created a blissful mood in the F major coda. Petit Canon had an atmosphere of folk music not unlike many pieces of Ralph Vaughan Williams. The artist employed a range of colors here, the flutes taking pride of place. The concluding Improvisation, in E-flat minor, placed a plaintive, undulating accompaniment above the alto-range melody played on the oboe stop. Archer propelled the tempo in the more urgent middle section pointing to the tonic major but, after a large ritardando, recapitulating the opening minor-mode music before, ultimately reaching the reward of E-flat major. The performer’s registrations worked well, the Romantic sounds of the Hook and Hastings speaking French with an American accent, one might say.

Having opened the program with a demanding Bach masterwork, the artist closed with the most overtly virtuosic piece on the program, Te Deum by Jeanne Demessieux (1921-1968), one of the most gifted organist-composers produced by France, whose career was tragically cut short by cancer. The Te Deum is less a set of variations than a musical journey whose unifying motif is the titular plainchant. Archer made vivid contrasts among the dramatic fortissimo chords of the first section, the second section’s piano chords over broken octaves in the pedal, the calm chorale-like third section (one is tempted to say “the eye of the storm”), and the fourth section’s scampering left-hand runs as feet alternate with right hand. As if this was not impressive enough, the latter leads to a passage of electrifying staccato chords in triplets with a legato melody in the top voice and finally a coda with syncopations and jazzy harmonies before the triumphant final chord. Demessieux’s music is not often seen on recital programs and has a reputation for being overly difficult—both to play and to listen to. Performances such as Archer’s disprove that reputation.

While the turn-out at the cathedral was not what one would hope for, I am confident that those who heard this recital would agree with Richard J. Clark, the cathedral’s Music Director, that on Sunday, the hottest day of the year thus far, the Cathedral of the Holy Cross was “the coolest place to be in Boston.”

Gail Archer is an American organist, music director, choral conductor and an academic. She is a Professor of Professional Practice at Barnard College, Columbia University and the founder of an international forum for women organists called Musforum. She directs the ‘Barnard-Columbia Chorus & Chamber Choir’ and the ‘Music Program’ of Barnard College, Columbia University.