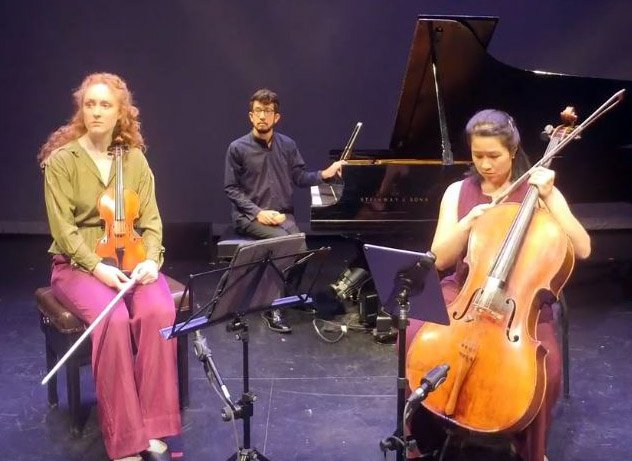 No one can object to Gesamtkunst or originality of engagement…but the 2021 Naumburg International Chamber Music Competition winning Merz Trio’s mastery and distinctiveness is such that they didn’t need a gimmicky first-half mashup of self-arranged snippets on Monday at the New England Conservatory. The playlist dragooned entirely unrelated works into a chain-of consciousness jukebox of the trio’s pandemic listening. Director Jon Levin placed those musical moments in dialogue with Erik Lochtefeld’s well impersonated recorded readings of Tchaikovsky’s complaints of depression and writer’s block (which made me think of Oblomov). Getting to the concert late, I missed the irony of juxtaposing a Haydn trio with words from Tchaikovsky despairing of that genre, though I caught up with it in a video of the performance which disclosed some interesting slyly choreographed snappy stage movement in the group’s entrance and some inspired mugging before they began the joyful and not at all perfunctory Haydn opener. Later Brigid Coleridge’s violin fantasy made its shimmering point after some sensitive lighting changes.) If one surrendered to the experience and watched it from the beginning, it made a solid if discursive effect, though some might have wished to have had a better sense of what they were hearing, what with the printed worklist invisible in the blacked-out house. But what I did hear of the first half found a polished and engaged threesome emphatically supporting a high concept. And clearly, I would have been happier having watched from the beginning.

As one of the artists explained it to me, the idea behind the Merz Trio’s “undiluted days” concerns Tchaikovsky’s initial distaste for trios, and the events in his life that aside from bringing much grief and reflection, became an inflection point in his decision to write one. This happens, midway through the episodic first half during Jeffrey Mumford’s undiluted days. Its middle movement serves to elegize his friend. The title also apparently suggests “a concentration of experience” as the repertoire* leads through seasons and shadows to Tchaikovsky op. 50’s 45-minute celebration of life and glorification of death.

The Plimpton Shattuck Black Box Theater supported the sound of the intense and powerful ensemble well, but the lowered pit placed an unbridgeable moat between players and audience. The hall is flexible, but the adjustments require much time and energy, there being no hydraulics to allow push-button-presto-changeovers. On the blank stage (strewn with some LED Lekos and Fresnsels) Alex Vásquez Dheming’s grid slowly morphed from golds through rusts, through magenta, lilac, and blue, in a seemingly arbitrary progression [we were told he meant to replicate changing seasons]. A pair of very annoyingly flickering lighting instruments kept bringing us up short, and the washed-out backdrop obliterated any words or images that briefly appeared. The shadow play of then solo cellist Julia Yang against the cyclorama worked nicely…but not much else caught our eyes. If you are going to be doing video or mixing media, it needs to be more elaborate. Aside from the shadow play and the washed-out lyrics, we kept waiting for something visual to happen…and it didn’t.

In the darkened theater, without the ability to reference the program, the unfamiliar works made interesting passing impressions, while the familiar ones got subsumed into arrangements that distorted them beyond recognition. We think we heard “La vie en Rose,” and something Irish happened with Coleridge singing irresistibly, but Gesualdo and Alma? Did they pass us somewhere in the dark? Did we need to get every allusion? The sound and light trip into the mind of Tchaikovsky…and their own made for a memorable evening, though the underscoring of Tchaikovsky’s conventionally depressive letters into that disparate mix seemed somewhat at odds with the manic mise en scène.

One of my fellow BMInters sees it differently:

We are better able to imagine Tchaikovsky’s anguish by listening to these pieces. Even though he couldn’t have imagined the sounds Mumford give us. This programming imagined Tchaikovsky frames of mind over three centuries. And that’s a really refreshing (especially during the Pandemic) take on the creation of this piece.

Ultimately, Tchaikovsky got his trio groove with an ornamentally elegiac work (his only one in the form) which included a funeral waltz, a funeral mazurka as well as two funeral marches…and too many ornamental variations.

The death of Moscow Conservatory Head Nicolai Rubinstein (brother of composer-pianist Anton Rubinstein who headed the St. Petersburg Conservatory) hit Tchaikovsky hard. The resulting 45 minutes of variations in the Piano Trio in A Minor op. 50 À la memoire d’un grand artistse show how the composer overcame his struggle with the form and his motivation. Its two movements contain 11 variations. The composer’s letters (and spoken text) reflect:

… in spite of this I am thinking of experimenting with this sort of music, which so far I have not touched. I have already written the start of a trio. Whether I shall finish it and whether it will come out successfully I do not know, but I would like very much to bring what I have begun to a successful conclusion … I won’t hide from you the great effort of will required to set down my musical ideas in this new and unusual form. But I should like to overcome all these difficulties. I fear I may have arranged music of a symphonic character as a trio, instead of writing directly for the instruments. I have tried to avoid this, but I am not sure whether I have been successful…

He did succeed in creating an enduring chamber work which demands of and received much from these performers. Permit me 13 critical variations:

Engaging and attractive stage presence
Elegiac in death marches
Lively in waltz and mazurka
Reveling in fast ornamentation
Elegant, big loud, uniform sonic vision
Pianist Lee Dionne can play out without covering the strings
because he pedaled lightly and held back in the middle register
for the cellist and upper register for the violinist…
all the while adding sinew and skeleton
Violinist Brigid Coleridge disgorges exquisite gleaming warmth of tone
Attractive stage presences all
Unabashedly romantic but without excess
Strings used vibrato as expressive effect, varying from none at all to throbbing
Committed ensemble longing
Unpredictable but always apt phrasing and expression

A planned encore, Richard Strauss: Morgen! (Tomorrow!), Op. 27 No. 4 (1894) arr. Merz Trio,
closed the show with bittersweet longing and made for a fitting second coda.