Lin’s collaboration with Greensmith in the devilishly difficult and cognoscenti-pleasing four-movement Sonata for Violin and Cello by Ravel found both artists in excellent form, both individually and collaboratively at Jordan Hall on Saturday night. Ravel wrote of this tribute to Debussy, “I think this sonata marks a turning point in my career. The music is stripped to the bone. The allure of harmony is rejected and more and more there is a return of the emphasis on melody.” Annotator Jannie Burdetti writes of the somewhat dry and acerbic piece:

Two single melodic lines open the first movement. The violin oscillates between major and minor, while the cello enters the same register and is at times even higher than the violin. It creates a kaleidoscopic effect of an eight-stringed instrument. The sonata is cyclic, and two themes that are introduced in the opening continue to return, transformed in each of the following movements.

Temperamentally and sonically the players showed great compatibility. Both had strong technical command, which came across as quiet confidence rather than overt theatricality. It sounded as though they were making music for their own pleasure and small group of friends. But that approach worked in this distinctive piece. In the somewhat lyric Allegro they imitated each other with important differences in fleet lucidity. The generous profusion of pizzes in the Tres vif movement alternated with digging-in bows. The well-traded dominance described a notable arc and built to an agitated, dissonant ending through the movement’s continuing broken and mayhaps vague references to the Dies irae, which also seem to perfume the long and tragically austere Lent. Greensmith entered that third movement steady and pure, and Lin responded with even more poignant restraint, but the muted recap at the end felt distanced. Vif, avec entrain eagerly bounded across the extended stage with tight ensemble, albeit feeling small-boned and a bit too tidy. After the lively sul ponticello episodes, the duo seemed to catch fire and earned a generous ovation from the sizable crowd. 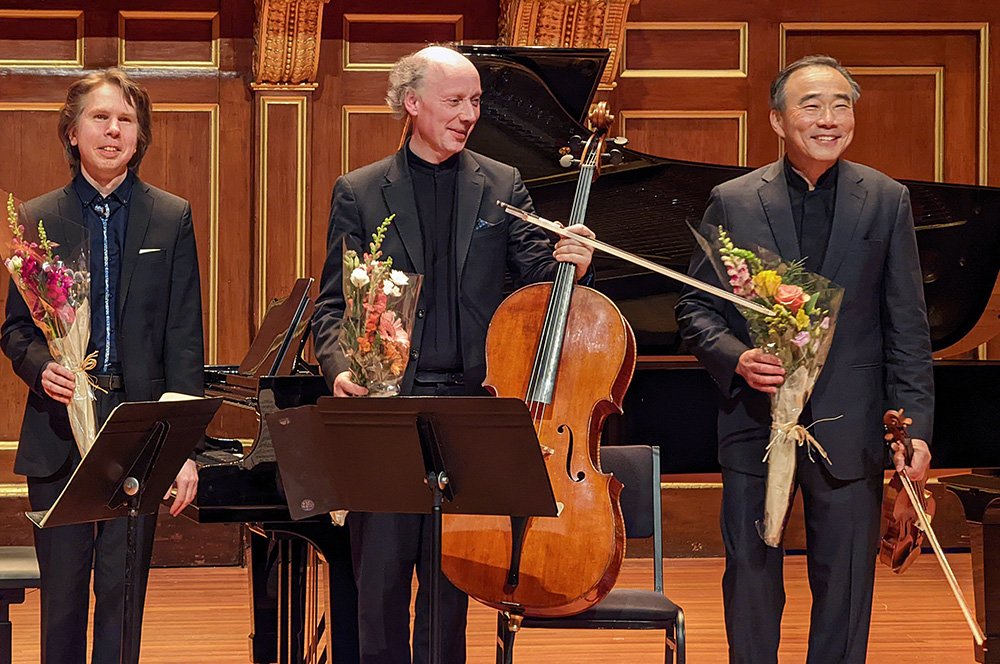 The show had opened with a not entirely successful partnership in Bach’s Sonata No. 6 in G Major BWV 1019. The last work in this genre for the master not surprisingly gives twice as many lines to the keyboardist as to the violinist. In this example Bach realized the figured base to assure that listeners 200 years later would hear what hear what he had in his head. Did that give license to Juho Pohjonen to overplay? Though a facile and accurate pianist with a well-focused tone and a solid drive, with the lid open on the 9-foot Steinway, he covered the violinist much of the time. Nor did there seem to be much interplay or listening from either player. In this fast-slow-fast-slow-fast sonata, the two players could have been in separate rooms, and we witnessed little notable shaping or felicities of expression beyond movement-ending ritards. Furthermore, Lin worried us by taking quite a while to warm up.

Schumann’s short Intermezzo and Brahms’s longer Scherzo from the collaborative F-A-E Sonata again paired Lin and Pohjonen. If the players intended any stylistic distinction between Baroque- and Romantic-period playing, it eluded me. Schumann’s movement lacked sweep and Lin all but disappeared. Finally, in the Brahms portion, Lin began to show some attitude, but the pianist didn’t know when to back off and he rushed. Ensemble threatened to spin out of control at times, and Lin’s 1715 “Titian” Stradivarius never took flight.

Comments Off on Three Playing as Three