Imagination, in many creative traditions, is defined by finding new constellations and nuance within a restrained set of elements. In the Takács Quartet’s Celebrity Series appearance with bandoneonist Julien Labro at First Church in Cambridge on Saturday, restraint begat creativity across several spectra. From the motivic and rhythmic threads that rippled through the repertoire selections to the subtlety of dynamic range, perfectly calibrated for the cavernous space, the performers coaxed out subtleties — both improvised and carefully planned — that drew on a set of traditional and well-known themes.

The insistent diatonicism of Bruce Dessner’s Circles created a pleasantly even texture, from which intervallic and rhythmic individual lines emerged. Around the quartet, these lines were handled with a quasi-vocal charm and intelligence. The introduction of a 2+3, dance-like rhythm in the lower strings reframed the function of those sonorities — this before the piece’s sudden conclusion and climax, in which false and natural harmonics, ponticello, and a register jump in the bandoneon create a texture, as uniform and singular as what came before but with a newly intense clarity. The sonic synthesis displayed between the bandoneon’s steady sonority and András Fejér’s sound was deserving of a special note throughout the work’s performance.

Labro then introduced the program’s heart, beginning with some brief notes on the bandoneon. Examining the traditional contexts in which the instrument has been played — from churches to brothels — Labro provided an essential historical frame. Throughout the pre-Ravel selections, one could understand junctures in which the bandoneon echoed the functions of its past and areas in which Labro and other have pushed the instrument’s sound forward and farther afield from its origins.

“Meditation #1” featured stylish individual string writing — the quartet was undeniably precise in leaving space in the boomy acoustic for each musician’s gestures to emerge from the fold. From O’Neill’s rich moments of lyricism to Fejér’s nimble transitions between singing and tango-rhythmic gestures, the ensemble’s energy was carefully corralled to highlight the music’s imaginative turns, sighs, and phrases; second violinist Harumi Rhodes acted as a deft conduit of phrasing energy, tying Labro’s gestures to the strings’.

Labro’s solo playing continued to invite the audience into moments of invention and subtlety. His improvisation, which featured quintessential tango ornamentation, intervallic melodic figures, and rhythms, sparkled in its softest moments, in which gestures were rendered with unbelievable grace or wryness (dependent on the situation). A brief diatonic interlude in which Labro showed off some percussive extended technique was a particularly striking point at which to digest these tonal colors. His Bach was possessed of the same masterful sensibility in its quietest stretches, the tension and held momentum of pianissimo phase conclusions sending the interlude from one phase to another in an entirely unique way.

Finally, Labro’s homage to tango icon Astor Piazzolla subverted common tropes to deliver some of the most striking moments of the evening. From the point when Piazzolla’s voice first emanated from the tape as a rhythmic, looping, and repetitive instrument, a tension and dialogue between rhythm and lyricism, affect and meaning, was created. “Nothing was new, everything was old,” asserted Piazzolla’s voice — and while his voice and playing on the tape was a very tangible reminder of tango tradition, Labro’s recontextualization of Piazzolla’s playing and words, not only their sounds, but their very function, found something very new within the familiar elements. His beaming tone and sparkling gestures seemed to pry Piazzolla out of the tape, making him manifest in an entirely new way. 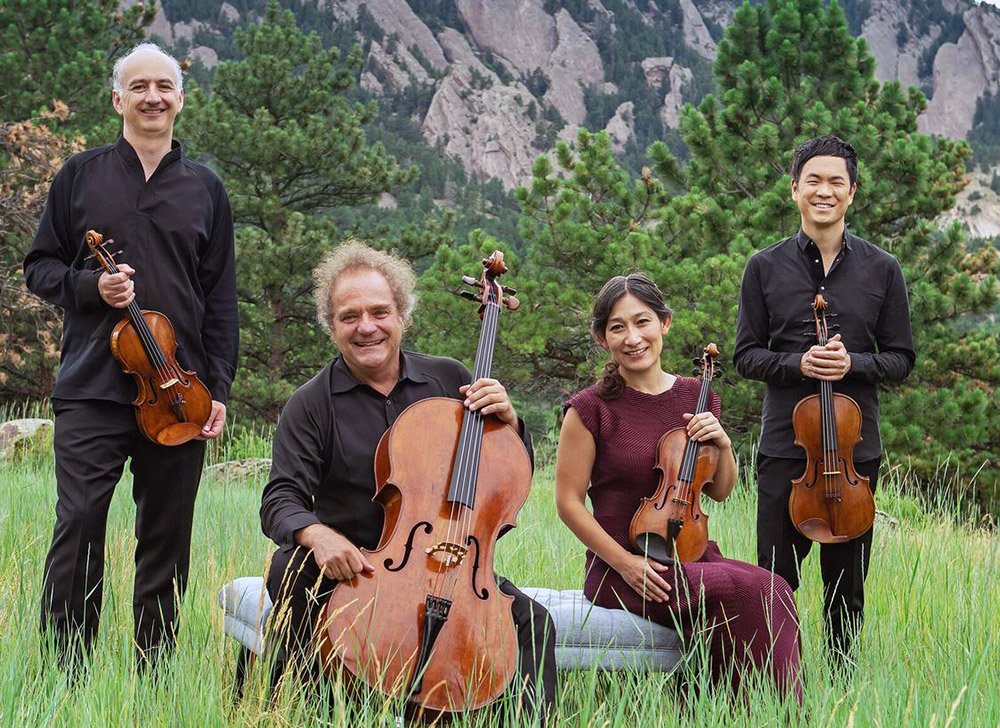 After this ideological and technical tour de force, the Takács returned for their performance of Ravel’s String Quartet. Widely recognized as a medium for composers to express both their philosophy and their brilliance, Ravel’s opus is truly a study in virtuosity on both fronts, working effectively with the barest amount of thematic material, and the performers made that brilliance plain. The first movement was taken at a refreshing clip, which generated sufficient airspeed to create inter-phrase linkage while leaving room for small eddies of tenderness. When time was tastefully taken, Rhodes again proved to be the gravitational impulse grounding these gestures. The quartet’s sound, epitomized by Dusinberre’s melodic playing, featured free bow use without being overly hollow; its balance of impressionistic glow and real core made for a refreshing redress against the haziness that can characterize less sophisticated interpretations of 20th-century French music.

The second movement continued to show a clarity all the more impressive when considering the performance’s venue (in which ushers’ shoes clacked with almost-cartoonish echoes when guiding patrons to their seats before the show). The pizzicato accents, arpeggiated inner-voice background textures, and other elements were carefully emphasized and not overplayed. The third movement featured similarly intelligent textural work in the inner voices, alongside flatteningly beautiful solo playing from Richard O’Neill. Finally, the work’s finale featured some of the same propulsive energy across phrases and phrase groups that so successfully animated the first movement.

After the Ravel, the program came to its conclusion with Clarice Assad’s Clash. Another piece for which Celebrity Series of Boston was among the commissioning cohort, Assad’s offering was entirely distinct in its compositional palette from the Dessner, demonstrating what a wide-ranging variety of stylistic offerings can be assembled for a specific instrumentation. Clash’s writing is virtuosic but never gratuitous — its idiosyncratic rising gestures were reminiscent of tango riffs. Quartet entrances seemed to egg each other on, with special ardency coming from some of the cello’s soloistic moments. Textual variety in the strings – from polka-like oom-pahs to fugal 16th notes — played against the bandoneon’s sustained sound for much of the work. When the four players joined Labro in some sustained playing towards the piece’s conclusion, Assad provides yet another instance of sonic variety.

As the musicians closed with an encore of Villa-Lobos’ Melodia Sentimental, the audience could revel in lyricism, timing, and melodic traditions that felt familiar. But it was the unfamiliar and the inventive that characterized the Saturday night with Julien Labro and the Takács Quartet — even when it came from familiar places.

With a BA in History and Literature from Harvard and an MM in cello performance from New England Conservatory, cellist Lev Mamuya combines his passion for music with a keen interest in exploring and celebrating what is most essential and affirming to society in a variety of cultural practices.

Comments Off on Subtlety, Variety, and Great Sonorities