Fermata Chamber Soloists will present Carl Stamitz’s Viola Concerto and the Boston premier of Le Chevalier de St. Georges’s Violin Concerto Op. 5 No. 2 in A Major. at the Somerville Armory, 191 Highland Ave. on Sunday May 8 at 3pm. One can read a review of a recent local performance of the overture to his opera L’amant anonyme HERE.

The life of Joseph Boulogne, Le Chevalier de Saint-Georges (ca 1739-1799) is the stuff of legends. Perhaps the most multi-talented and unique composer in all of western art music (and certainly for his time), this man was an athlete, military commander, violinist, teacher and composer. Born in 1745 on the island of Guadeloupe to a slave and George de Boulogne, a member of the French Parliament, it wasn’t until the mixed-race Joseph was 13 years old that he wound up in France. In many ways, Boulogne is a romantic hero, complete with the quintessential once-in-a-century talent, and general rejection from society at large typical of such figures. By the age of 17, Boulogne was the greatest fencer in Europe, a master equestrian, and a fine marksman with a pistol. It is a wonder that this man found any time for music, let alone enough time to completely master the violin.

Surprisingly little is known about Saint-Georges’ musical training. It is likely that he studied violin with Jean-Marie Leclair, the most regarded violinist in France at the time, and the founder of the French violin school. By any definition, Boulogne was a successful composer and musician in life. He was revered for his brilliant and commanding talents as a violinist and acclaimed for his remarkable abilities as a composer. He has many pieces attributed to his name, among them six operas, 14 violin concertos, and dozens of chamber music works. Boulogne was not a particularly prolific composer when compared with his contemporaries; this is understandable given his primary career as a soldier and athlete (note his portrait shows him holding a sword in his right hand with the musical score behind him). It should be noted that due to the French Revolution, some of his works may have been lost.

In many ways, Boulogne was more infamous than famous. Wolfgang Amadeus Mozart, for about one month, lived under the same roof as Boulogne. Well aware of his success, Mozart attended the premier of Boulogne’s Symphonie Concertante in G major for two violins (or violin and viola), and within a year produced a remarkably similar work of the same name. Mozart’s jealousy became evident throughout this period. There are some who argue that the antagonistic, dark-skinned character Monostatos, from The Magic Flute, was Mozart’s depiction of Boulogne, whom he considered his nemesis. While there is evidence that Boulogne was aware of these feelings, it is clear that it made no impact on his life or output as a musician. Indeed, by 1792, a year after the premier of The Magic Flute, Boulogne took command of the Legion Nationale du Midi (the first all-black regiment in Europe), hoping to play a more active role in the French Revolution. For reasons that remain uncertain — but perhaps due to his teaching music to Marie Antionette — he was relieved of his command and imprisoned for 18 months. After more revolutionary actives on St. Dominique with his friend Lamothe, a horn player, Boulogne died unceremoniously of gangrene in June 1799 in Paris. 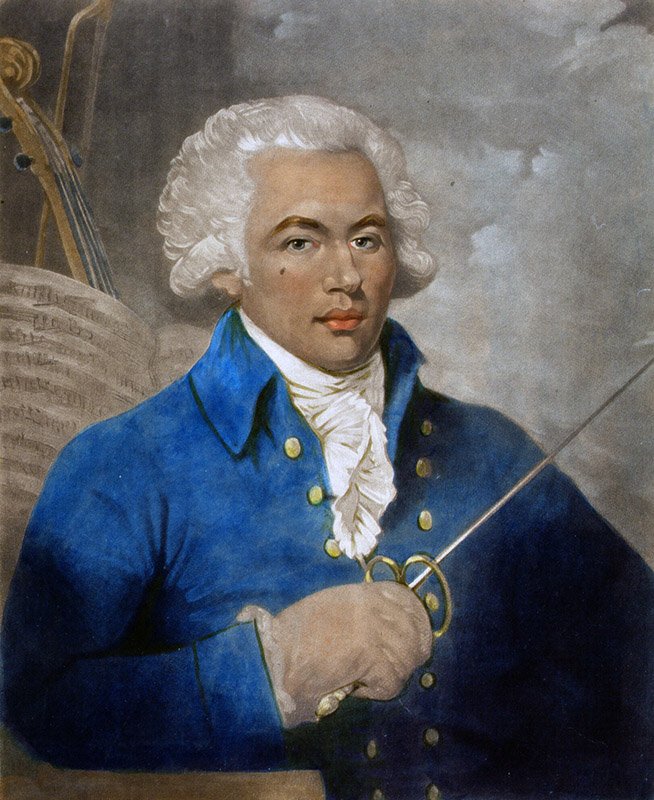 Boulogne’s violin concertos can be seen as the missing bridge between the era of Vivaldi and the era of Mozart (as they pertain to the violin repertoire). By looking at the concerto Op. 5 No. 2, probably written in the early 1770’s, and published in 1775, one can learn a great deal about Boulogne as a violinist. His extensive use of double-stops, string crossings (specifically bariolage), and high positions not only reveal his prowess, but elevate the violin concerto to new virtuosic heights. Furthermore, as said by his friend Louise Fusil, “the expressivity [in] his performances [is] his principal merit.” The second theme in the first movement harkens to romantic depth not seen for at least another 50 years. The slow movement contains delicate and heartfelt melodies that soar high above sparse orchestration. The third movement, using the popular form, Rondeau, introduces rousing thematic material in its central minor episode. In my mind, the third movement exists as a harbinger to Beethoven’s Violin Concerto.

Boulogne is not alone in having unmatched success in life as a composer, but little to no success after his death. This path is mirrored by Samuel Coleridge Taylor, and William Grant Still among others, in many ways. These composers enjoyed vocational success in life, but near complete neglect in death. The popularity they experienced in their time was more due to public fascination with black virtuosity rather than admiration and respect for their artistic output. Up until 2020, Boulogne was not a widely performed composer, and I caution performances of his music for sake of his skin color, or to check a box in season programming. Instead, I hope Boulogne remains in the canon for his masterful skill as a composer.

I am happy to give the Boston premier* of this music in May, and I hope you will consider joining us in this occasion. Since I was young, I have wanted to perform one of Boulogne’s concertos with orchestra. My heartfelt thanks to everyone at Fermata Chamber Soloists for making my dream a reality.

Founded in 2018 by Thomas Cooper and Nicholas Stewart, Fermata Chamber Soloists is a Boston-based, nonprofit concertizing organization that changes refocuses lassical music on the live concert experience; we present a diverse concert repertoire featuring multi-format ensemble works, ranging from solo to chamber orchestra, drawing on a pool of young artists of the highest caliber. By presenting experiential, community-oriented events that redefine what classical music can be, while retaining the highest level of artistry, our concerts are fun, intense and informal.

*  According to my research, the Op. 5 No. 2 violin concerto has never been performed in Boston. If someone can produce evidence that is has been, please don’t hesitate to reach out.