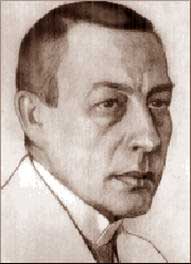 For this occasion Rivers faculty member Dan Loschen arranged the Ukranian National Anthem for two violins (Jenae Starikov and Tetiana Zhmendak), three cellos (Steven Laven, Ron Lowry and Zoya Shereshkova) and baritone Mark Anderson. A dignified chant, the piece encapsulates the centuries old Ukrainian struggle for national identity and independence. Then Konstantin Starikov read the poem, “My Testament” by Taras Schevchenko. The verses pay homage to the country’s steppes and fertile fields and introduced us to the melodic and euphonious Ukrainian language.

Jenae Starikov, Ana Pop and Zoya Shereshkova gave a noteworthy performance of Rachmaninoff’s Trio Elegiaque in which the character of the piece perfectly fit the occasion and reminded the listener of the powerful humanistic element in Russian culture. It opens with mystery and tonal ambiguity created by furtive fourths played ppp by both strings. On the weakest beat of the fourth measure, the piano enters with three rising octaves, landing on a G minor chord at the downbeat of the fifth measure. This progression forms the principal melodic motif. In this first section, marked Lento lugubre the theme is heard in all three instruments, always with a sombre, dramatic tone. Then the violin introduces a playful element in sections marked più vivo and con anima. At Appassionata the strings return to the drive and intensity of the four-note theme with the piano providing prodigious technical displays. A logical assignment of roles given Rachmaninoff’s keyboard virtuosity. The piece ends with a funeral march. Starikov, Popa and Shereshkova navigated the mood changes and musical demands with ease and polish.

We heard “What A Moonlit Night” a Ukrainian song composed by Mykola Lysenko with lyrics from a poem by Mykhailo Starytsky in a cello/piano arrangement by Zoya Shereshkova and Ana Popa. The melody, formed from three descending notes, sang in Ana’s beautifully voiced performance. Zoya’s somber cello, using the same melodic material, created a perfect contrast. Resignation and tenderness prevailed.

In Ukrainian Myroslav Skoryk’s Elegy for violin and piano, Eleanor Perrone and Tatiana Zhmendak grabbed a soaring melody with gusto. The theme is created by stepwise motion of half notes, quarter notes and eighth notes. A few well-placed leaps in the violin create the drama. The piano creates disquiet with broken chords while echoing the violin’s melody. Ellie and Tatiana moved the action forward, each in turn using their instrument to maximal effect. The theme rises to an ff climax on high b flat before ending in a whisper.

Lois Shapiro, piano and Ron Lowry, cello, performed the slow movement (Adagio Affettuoso) of Brahm’s Sonata for Cello and Piano in F op 99. The cello opens in a pizzicato exposition of the stately main theme over piano chords. The majesty so closely associated with late Brahms was expertly conveyed by the two artists.  The piece ends with an F# major chord. Lois navigated from there to A minor and the two played Skoryk’s Melody for High Pass without interruption. Skoryk creates a doleful theme with four16th notes moving stepwise that then reach for a half note by fourth or octave. This motif is heard almost exclusively in the cello until well into the piece. The piano quotes the 16th-note fragments from the cello. As the two exchange roles and thematic material the mood changes to one of hope. The final rolled chord in the piano reaches high A, reinforcing the uplift. The piece has of late become one of the nation’s spiritual anthems.

Jenna Starikov intends for Saturday’s recital to be one in a series dedicated to the defense of Ukraine. I look forward to the next, for musical reasons and to support a worthy cause.

Comments Off on A Musical Defense for Ukraine