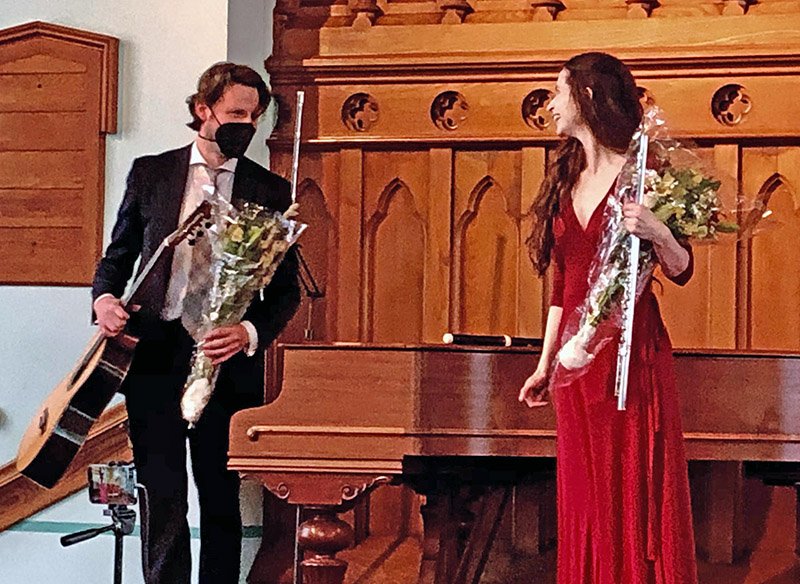 As the Titian painting of the pastoral concert attests, le concert champêtre (or is it by Giorgione after all?), pairing some kind of flute with some kind of guitar has long served to attract music lovers into the countryside. On Sunday afternoon in the Stone Church Cultural Center of pastoral Gilbertville, MA, flutist Emi Ferguson joined guitarist Michael Poll in the whimsical program “The Court, the Palace, the Ocean, the Trees.” Interspersed among many small gems (Robert Beaser’s arrangement of “Barbara Allen,” Elizabeth Ogonek’s Altair, Gabriella Ortiz’s Alejandrías sonoras for solo flute), the three larger works discussed below stood out for their power and beauty.

Toru Takemitsu composed Toward the Sea as a commission by Greenpeace for the “Save the Whales” campaign. Ferguson and Poll brought out its magical colors, imagery, and silences. They infused the first part, entitled The Night, with a Debussy-like radiance. In the second part, Moby Dick, they summoned a large living mammal out of the night, playful and forlorn, combative and vulnerable, prophetic and doomed. In the third and last part, Cape Cod, a guitar solo by Poll created a deserted beach where Ferguson’s flute searched in vain through the lapping waves for the vanished whales living now only by haunting our memory. The rendition was subtle and phantasmagorical, sure-footed and self-effacing.

Playing lovingly with the notion of patrimony and preservation, Poll and Ferguson arranged Mini-Suite themselves out of selections from Bach’s Goldberg Variations and Unaccompanied Suite in E Major, and Domenico Scarlatti’s K.380 Sonata in E Major. With the opening Aria in flute, bass line in guitar and ornamented repeats, the soulful Aria led directly into the first Variation, more clearly dance-like in the flute than usual on a percussive keyboard. The graceful Loure from BWV 1006a in solo flute formed the second movement, rounded out by a delightful rendition of the Scarlatti Sonata, the birdcall nature of the opening theme made evident in Ferguson’s clear and bold flute. Poll’s guitar, in turn, nicely brought out the Espagnolisme that infuses Scarlatti with a secret vivacity.

The program closed with Piazzolla’s magnificent Histoire du Tango (1985). The four movements took us from the Bordello (1900), to the Café (1930), to the Nightclub (1960) and to the soundscape of Today. Ferguson and Poll masterfully took us on a journey of desire and its vicissitudes: from the enticing, ludic yet predatory Bordello to a soulful and dreamy Café scene where embers of muffled desire disturb the idleness of afternoons; then on to a focused, raw Nightclub where the tango verged on a Totentanz merging sexuality and death. Ferguson and Poll infused this third section with such verve that the audience burst into applause. The jaunty, jazzy, street-wise Tango d’Aujourdui felt almost like an encore – a reminder that the present moment of our lives is always already an afterthought, which is precisely why patrimony and preservation must flourish open-endedly and forever in our fields. (The concert was sponsored by the Friends of the Stone Church, who seek to restore and preserve it both “as a historic landmark and as a place of cultural and community enrichment.) Contributions, anyone.”

Anne Davenport is a scholar of early modern theology and philosophy. She has published books on medieval theories of infinity and Descartes. Her most recent article is on Atomism and providence in XVIIth-century England.

Leon Golub is an astrophysicist at the Center for Astrophysics in Cambridge, and has been a lover of classical music for over 50 years.