From in front of the blue-lit curtains of GBH Calderwood Studio on Sunday afternoon, pianist Jeremy Denk took to the stage to offer remarks to 300 eager listeners before our journey through one of history’s most influential works. Johann Sebastian Bach’s The Well-Tempered Clavier, Book 1 began as exercises in keyboard technique for his son but stands 300 years later as a masterwork of keyboard and indeed any kind of composition. Following along with their bodies each moment and movement, the audience clearly knew and identified with this work. Denk suggested that we imagine these 24 preludes and fugues, alternating in major and minor keys, as metaphor for a musical Noah’s Ark, with denizens warm, welcoming, feisty, and unpredictable. With two of a kind for each musical creature, we could conceivably begin music again from such elemental works of harmonic and contrapuntal prowess. 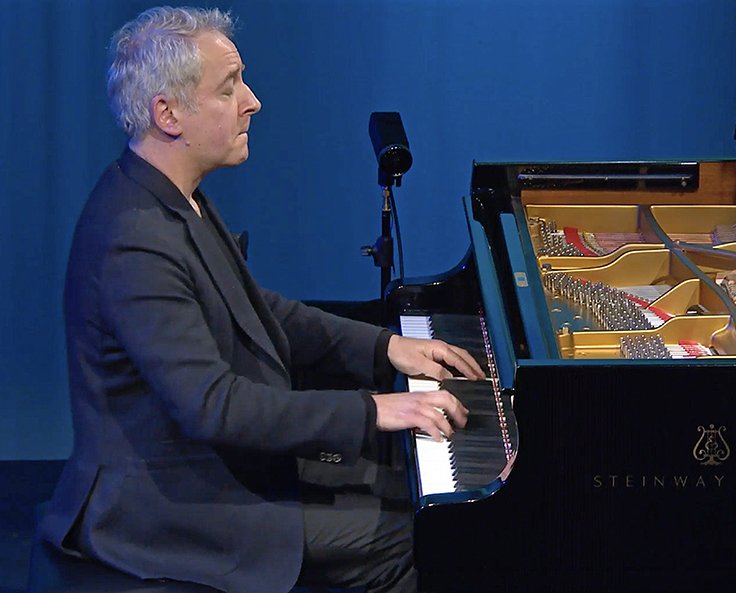 There can be no better demonstration of clarity of sound than from the opening prelude, to which, Denk appended tasteful additions of ornaments along with his almost staccato articulations; this technique brilliantly illustrated voice entrances that would remain exquisitely clear throughout the performance. Denk’s digital virtuosity surfaced at finger-blistering speed with the C-sharp Major Prelude, followed by an incredible shift in affect in the C-sharp Minor prelude. His dynamics astounded us with their breadth. His softest playing haunted the room, but balanced joyfully with his immense fortes. These changes of character made for layers in Denk’s sound to connect us not just with the content of the composition but also with the emotion in his interpretations.

Denk’s thpoughts about the fugue as a metaphor for the journey of life became abundantly clear in his interpretation. Beginning simply, becoming complex, and wandering away from itself, it returned to the original line only wiser. Periodically Jeremy Denk would lift his head and open his eyes to look at the audience, as if to say “Did you hear that?” or “Pay attention to this part!”. These moments of connection offered great guidance. As the numbers unfolded, he made important subjects abundantly clear when they first arrived and upon their returns.

After an incredible display of dynamic contrast, articulation, and clarity of lines in the first half of the preludes and fugues, the F-sharp Major Prelude began the second half. Its very clear theme and perhaps his softest dynamics yet made a gorgeous new beginning. The subsequent F-sharp Major fugue, immensely quick and virtuosic, showed no signs of the difficulties inherent in that black-note key. The G Major Prelude and Fugue made a playful pair, followed by the brooding brother of G Minor. In A-flat Major Denk’s expert change of character surprised us again, with his falling lines overlapping over one another clearly and colorfully. The fugue came fast and virtuosically. Denk showed us his humor in the A Major prelude with his facial expressions, making us laugh with him as he let us through the most light-hearted example. The Minor pair constitute iconic examples; Denk’s sensitivity made the A Minor fugue sound effortlessly masterful all through the thickness of its the overlapping fugue lines. He tastefully closed with the first Prelude to bring the monumental work full-circle, followed by a standing ovation from a full house of exceedingly satisfied concert goers.

Raley Beggs is a classical guitarist with degrees from Florida State University and New England Conservatory. He is currently working on his doctorate in guitar performance, teaching and performing in the Boston area.

Comments Off on Noah’s Ark