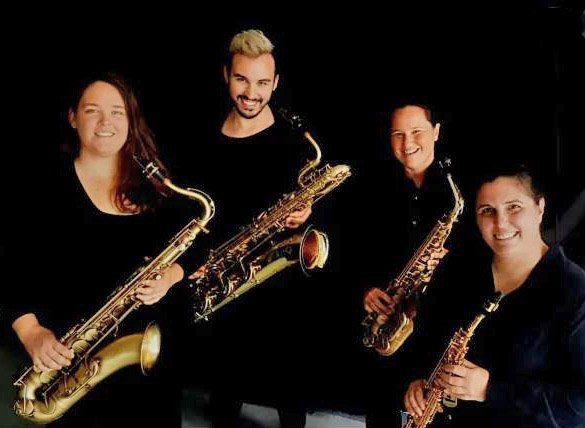 Pharos opened with a drip of hot sauce on the tongue, Howler Back by Zack Browning. Clocking in at around two minutes, the dissonant and driving rock-inspired piece that allowed baritone saxophonist Zachary Schwartz a moment to lead with heavy and sharp articulations.

Tenor saxophonist Emily Cox’s transcription of the first movement of Maurice Ravel’s Quartet in F Major came next. Lush as Ravel’s music always is, the melodies transferred rather well to the alto saxophone and tenor saxophone, rendered with pathos and care by Amy McGlothlin and transcriber Cox respectively. Some moments, however, revealed the tribulations of transcription, for example when the saxophones tried to replicate delicate and agile single note tremolos with what appeared to be timbral trills. While admirable in its attempt to translate an idiomatic technique on strings that winds struggle with, the subtle pitch change in the timbral trills felt somewhat awkward against otherwise in-tune material.

Two years later than planned Improbable Beasts, eight bass clarinets forming their own choir made its world in-person debut. Appropriately, after the premiere of Beast leader Jonathan Russell’s piece Prelude/Chant which felt like a large expansion upon Gregorian chant, the choir played an eight-part SSAATTBB work, Purcell’s Hear My Prayer O Lord. Interestingly, the Purcell melded in with the Russell premiere, amalgamizing both works into one longer attaca suite. It came as a welcome surprise. The diptych also showed that a lot of the melodies fell into Russell’s hands, and he rendered all of them with a wide array of varied and intense characters (I comment on this now, as nearly all the works featured Russell as the lead voice).

Another Russell premiere, Funky Groove Vortex was realized from the score for a dance production that never materialized. Russell commented that the choreographer wanted the music to be funkier, so he recomposed on the spot to oblige. Funnily enough, the bass line reminded this reviewer of the tango more than funk, a mix of traditional tango and Astor Piazzolla-esque tango nuevo. The other performers slowly built more and more layers on the bass line, echoing the baroque passacaglia with modern harmonies while naturally evolving on its own without the constraints of the dance form. The only slight issue was the introduction of a section which eschewed the groove momentarily that appeared and summarily disappeared, feeling more like a blip on the radar rather than a section.

Following a well-done transcription of the spiritual “Sometimes I Feel Like a Motherless Child,” Purcell returned in Russell’s transcription of “Dido’s Lament” from Dido and Aeneas. Though the ensemble might seem too heavy of sound for such an aria, the Beasts rendered it admirably across all the registers of the bass clarinet, making what could be a single timbre into a wide color palette. Russell really shined here on the famous vocal melody, full of sadness and anguish lacking the text. Finishing out their half of the concert, the Beasts played a transcription of the seventh movement of Prometheus by Marc Mellits. Driving and rollicking, the players effectively broke into three parts, a bass line and two antiphonal or stereophonic melodic voices and played with the stereo nature of the curved stage setup, passing the melody back and forth between the antiphons. 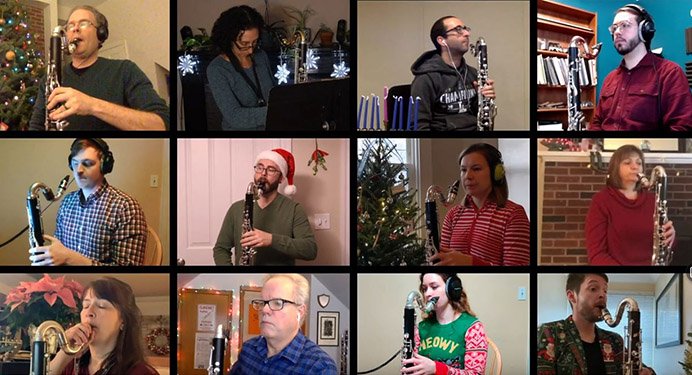 The groups combined to render the Ukrainian folk song “Plyver Kacha.” Most of the melodies came achingly from Schwartz from Pharos, deep and resonant in comparison to the otherwise nicely blended Beasts and McGlothlin and Cox. Soprano saxophonist Jennifer Bill conducted the massed ensemble, only entering briefly on the soprano saxophone once for a refreshing change of sounds. Her control of the instrument is admirable, considering its propensity for sounding like a goose.

Yale composer Martin Bresnick’s consortium-based saxophone quartet, Mending Time, based on Robert Frost’s poem “Mending Wall,” loosely adapts the core message through pairing off the quartet members while grouping them back to quartet to ponder the confusion the poem left the world in. Shorn of any actual text, Mending Time, in its world premiere, did not quite effectively render the poem. It did effectively showcase the duet musicality of the Pharos Quartet members, all paired off over time with one another. The second movement, “The Gaps I Mean,” continued some of the ideas from the first movement with tense and dissonant harmonies mostly in added note chords and bichords. Schwartz led it forcefully on the baritone sax. Mike Mower’s groovy work £7.50. Clearly inspired by popular music, the quartet fell comfortably into the pocket of the groove and carried the concert out on lighter fare.

Both Pharos Quartet and Improbable Beasts rock the new music scene here in Boston, eschewing strings for entirely woodwinds and their wide expressive ranges. I know we will hear more from Pharos soon, and I do hope that Improbable Beasts continues on for years to come. Two truly unique, and now probable, beasts.

Ian Wiese is an Associate Professor of Ear Training at Berklee College of Music. He is working on his doctorate in music composition at New England Conservatory of Music, studying under John Heiss.

Comments Off on The Improbable Becomes Most Probable