The recent invasion has resulted in an outpouring of support from around the world for the people of Ukraine, including many tributes from arts communities. Chamber Music Boston held a special benefit at the Harvard-Epworth Church in Cambridge on Saturday night dedicated to the victims of the war.

Hazel Dean Davis (horn), Jonathan Cohler (clarinet), and Rasa Vitkauskaite Faneuf (piano) are well-known on the New England music scene—Davis through her work with the Boston Symphony, Boston Pops, Boston Ballet, and others—Cohler through his exemplary career as a soloist and conductor—Faneuf through her longstanding position as pianist for the Boston Philharmonic and frequent solo and chamber performances. Because the combination of horn, clarinet, and piano is so rare we heard Théodore Akimenko’s Eclogue (Elegia) Opus 12 and Brahms’s Trio in E-flat Major Opus 40 in transcriptions. Only Carl Reinecke’s Trio in B-flat Major Opus 274 came to us as originally composed.

The evening was clearly about more than just music. Faneuf, originally from Lithuania not far from the Ukraine border, recounted how, after members of her own family were rounded up during the Soviet occupation of the Baltic States (1940 to 1991) and exiled to Siberia, they faced a long and difficult journey home. She also introduced the work of the United Ukraine America Relief Committee, the evening’s beneficiary.

Ukrainian pianist, musicologist, and composer Fyodor (Théodore) Akimenko (1876-19450 studied under Rimsky-Korsakov, Balakirev, and Liadov at the St. Petersburg Conservatory, where he became a professor and one of Stravinsky’s teachers. He left Russia in 1923 and settled in France in 1929. He penned an opera and several orchestral pieces, but is best remembered for chamber works. 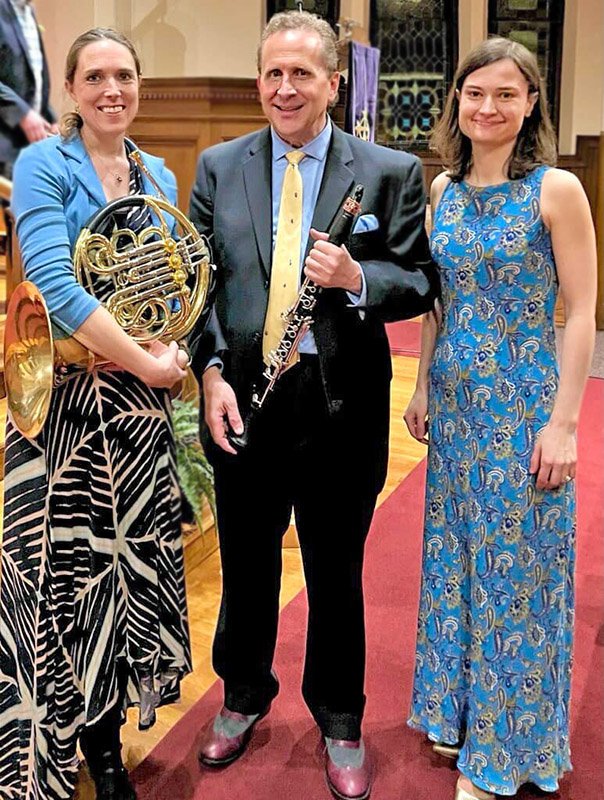 Davis arranged his simple, somber, and lyrical Eclogue (1900), originally for English horn and piano, for the occasion and noted its appropriateness given recent events. The arrangement divided the English horn part between the horn and clarinet, making excellent use of the rich low horn register and shimmering clarinet as they traded themes and then blended to add weight to Akimenko’s harmonies, while the piano provided clarity, motion, and context. Though hardly profound as a piece of music, Eclogue nevertheless made an ideal opener.

Brahms’s Trio Op. 40 for horn, violin, and piano, composed shortly after the passing of the composer’s mother in 1865, is among the loftiest chamber masterworks. Davis introduced the four-movement work as an exploration of grief, from wandering, to anguish, to reflection, to affirmation, befitting the theme of the evening. In a more lighthearted vein, Cohler quoted conversations of Brahms and Clara Schumann to make the case, only half tongue-in-cheek, that the clarinet was a much better partner for horn and piano than violin.

The instrumentation, including Cohler’s adaptation of the violin part, worked surprisingly well, the contrast between horn and violin in the original exchanged for more seamless transitions in the contemplative Andante, finer blending in the haunting Adagio, and greater uniformity in articulation in the boisterous Scherzo and hunting Allegro finale. Brahms demands virtuosity of all three performers, and each met the challenge. Davis displayed a remarkable evenness in tone from top to bottom of the horn range and handled the dynamic and emotional contrasts with aplomb. Faneuf provided a combination of rhythmic intensity, sensitivity, and playfulness often missing in performances of this work. The revelation, however, came from Cohler’s stunning control of the extreme registers of the clarinet on the lightly edited violin part. Faneuf’s powerful chords and waterfall phrases in the Scherzo, the delicate balance Davis and Cohler achieved in the Adagio, and the controlled abandon of all three in the final Allegro drew forth a well-deserved standing ovation.

Faneuf described Carl Reinecke (1824-1910) as a major composer, conductor, and pianist. Starting as a piano soloist, he eventually served as Music Director of the Gewandhaus Orchestra (1860-1895) and Professor at the Leipzig Conservatory (1860-1902). His best-known compositions are his piano sonatas and chamber pieces involving winds. He wrote the Trio for Piano, Clarinet, and Horn in 1905, after retirement from his posts allowed him to focus on composition.

The four movement Trio shows Reinecke’s skill in writing idiomatically for each instrument. The complexity of the piano writing surely evokes his past as a pre-eminent soloist. Yet he also can write demandingly, lyrically, hauntingly, and heroically for clarinet and horn. Only some loss of wind articulations in the Scherzo, likely due to the acoustics of the venue, marred a satisfying interpretation.

In the somber, warm, supportive, and intimate setting, applause between movements of the Brahms and Reinecke felt natural and welcome, providing needed breaks in the intensity of the event for artists and audience, and a means to support the artists and each other in real time.

Proceeds from ticket sales will go to the United Ukraine America Relief Committee, Inc., which provides vital medical supplies, care, aid, shelter, and food to those suffering during the hostilities. Donations can be made through a link at https://www.chambermusicboston.org .

Comments Off on Heartfelt Benefit for Ukraine