Steinway & Sons Record Label has this month released David Deveau’s recording of Schubert’s last two piano sonatas, D 959 and D 960, from 1828, the year following the death of Beethoven. Along with the one that precedes them, are usually seen as a valedictory trilogy, though, in fact  Schubert intended them as parts of a larger set. The loss of the earlier master had greatly affected Schubert; just a few months later he had completed only these three first essays for the set, when death cut his life short at 31 years. Schubert’s last year also saw the completion of the Mass in E-flat Major, the String Quintet in C Major, and many of the individual songs that posthumously became Schwanengesang.

Steinway has always had a legendary roster of artists but has only established its own recording label in 2010, carefully selecting newer rosters from various genres that feature its pianos in a variety of settings and partnering to create free play-lists with other streaming music services such as Archiv, Naxos, Spotify, and Apple. Deveau plays a Steinway Model D in the magnificent Shalin Liu Performance Center Hall, which he had guided through the planning and opening , and as Artistic Director of the internationally acclaimed Rockport Chamber Festival for decades. 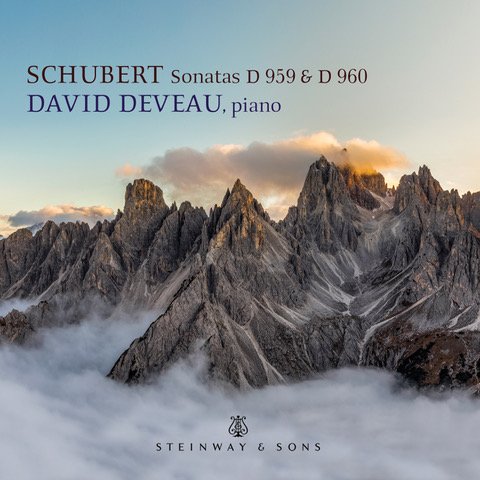 As for the music itself, the music of Schubert’s final year holds an especial quality that has been characterized as intimate, spiritual, sometimes religious, thought of by some as a “thin place” or the veil between this world and the next, or as Charles Rosen described it – “a solitary landscape.” Deveau himself writes of the works on this recording “The entire range of human emotional experience seems contained in these two towering works.” He goes on to describe grandeur “like a great Alpine ascent” while at other times dwelling on the more introspective characteristics “by turns reflective and accepting, or alternating pathos with extreme emotional anguish or a period of cautious hopefulness” or “the promise of a restful, dreamy sleep.” In the brighter movements Deveau finds “more youthful vitality, humor, energy, and general high spirits.”

One could write pages upon pages about the key relationships within and among the sonatas, their symbolic significance, their recall, and reflection of other works, even of the works of other composers, yet the performer’s own words quoted above best express both the character of the music and his interpretation of it. The recording held me spellbound, the classical outlines of the outer movements delivered with clean precision, joie-de-vivre, and a sense of architecture that truly epitomized Schubert’s love of classic forms, spacious structures, and long lines. Contrasting that energy and excitement was the poetry and intimacy of the inner movements and the subtle qualities of the short forms that Schubert truly excelled in, the lieder and the lied-like qualities in character pieces such as the Impromptus and Moments Musicaux.

In sum, this is a recording worth hearing, and Steinway & Sons Record Label is worth exploring, so have at it.