Outside, civilized society strains to hold together, and the dark clouds of war gather. Inside, one of the most important and insightful conductors currently active in this, our year of grace 2022, leads our Boston Symphony in a luminescent performance of important music, providing us with a glimpse of another cosmic plane, above and beyond vile aggression and conflict, and giving us a so-welcome, restorative respite from the terrible cares of the day.

Yes, it was that good.

The Mozart concerto received a fine reading, although this reviewer must admit to a bias/preference for “early instrument” performances in this repertoire. Martin Helmchen, previously known to me via some excellent duo recordings of Schubert sonatas with Julia Fischer, was a note-perfect, Apollonian transmitter of Mozart’s thoughts. His phrasing is impeccably tasteful, and even exhilarating in the playful, theme-and-variations finale. Helmschen’s musicianship and temperament accord well with the conductor’s own leanings, it seems to me. “I hear lots of Brendel,” my companion whispered to me, as the audience erupted into a standing ovation at the concerto’s end. The reduced-size orchestra played very well, with some fine moments from the winds, both in soli and as a delightful Harmonie.

I imagine that many in the hall had come to hear, most of all, the Bruckner, a work with which Blomstedt is closely associated; the newest edition, left unopened on the conductor’s stand as the maestro led the whole thing from memory, is dedicated to him.

Bruckner’s music has a kind of out-of-time-and space quality that this reviewer recognizes from the much-earlier repertoire in which he is frequently immersed. Blomstedt himself, in a recent interview for the Berlin Philharmonic media channel, characterizes it as being “about eternity.” Much has been written about the medievalism of the “Romantic”symphony’s narrative program: watchman on the castle tower, hunting scene, and so forth. But at some level, that’s superficial. The parallels with older, eternity-inclined music and mentalities go deeper. The obsessive repetition and mirroring of musical motifs evoke, at least to me, the puzzle-solving and palindromic aspects of much medieval polyphony. Think, please:

or have a look at the medieval, two-part polyphony fragment from the British Library (below); and then contemplate the everywhere-mirroring of motifs in the Fourth, just one example among scores being the oboe and clarinet at measures 131-134 of the first movement. There is a special kind of mind at work here. This may relate to Blomstedt’s remark, in the same previously-cited interview, that Bruckner’s music goes about “solving good problems.” 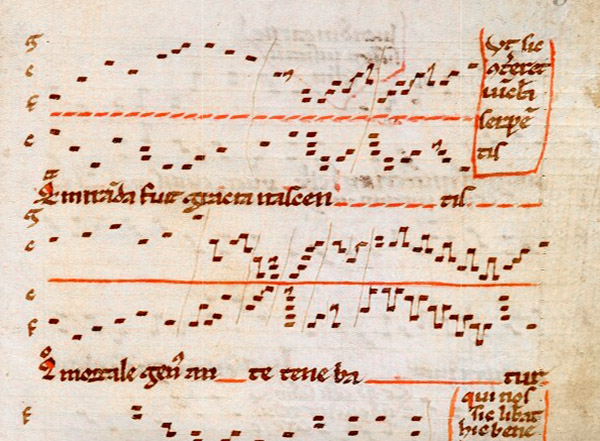 In any case, what many in the audience received during the Saturday night performance was a welcome glimpse of eternity. Blomstedt is, as is well known, the opposite of a showman. His role was that of a kind of angelic traffic cop, guiding the alert and committed instrumental ensemble through a path towards transcendence. At this point in his career, he emanates a benevolent aura that commands attention, respect, and affection. His gestures are restrained, probably due to the physical limitations of his advanced age. But every emanation from his body, great or small, derives from Bruckner’s score and from the composer’s intent.

Seated on the Symphony Hall floor, stage left, I had a very good and unobstructed view of Blomstedt’s right hand. Would that every conductor could lead a large band, in a large work, with such a hand! Blomstedt carries every detail and nuance of the piece in his head, and communicates much of what he wants to say with tiny movements of wrist, hand, and fingers. No leaps or swoops are necessary. It’s all crystal clear, calm, with impeccable, never-failing timing; quite awesome, to this viewer/listener. The orchestra played beautifully. People often come to Bruckner in anticipation of those over-the-top brass tuttis, and the BSO players did not disappoint; the fortissimo thrills arrived as promised. Blomstedt, as well, singled out the violas in a well-deserved bow for their fine, lyrical ensemble work in the finale. The ovation for it all, about an hour of intense, concentrated music-making from all concerned, was instantaneous, and prolonged.

Once again, I am reminded of Blomstedt’s earlier remark as to why he, a Seventh Day Adventist, was happy to conduct on a Saturday, the Sabbath. “Well, (I am paraphrasing him from memory) making music in performance is a form of prayer, and therefore justified.” My Shaker friends, related by faith and American history to Blomstedt’s church, said virtually the same thing when they agreed to sing their songs live in concert, and to make commercial recordings. To most of us, performance need not be the same thing as prayer. But what a gift to have, living among us, good people inhabited by such profound spirituality. I guess we all, churched and unchurched, have a lot to learn. Whether divine or simply human, the music, thankfully, remains.

Joel Cohen is director of Camerata Mediterranea and music director emeritus of The Boston Camerata. He will next appear with Camerata in May.

Comments Off on Light Streams From Blomstedt and BSO