At Saturday’s Piano Craft Gallery concert in the South End’s Chickering Piano Factory, pianist/organizer Pierre-Nicolas Colombat bade farewell to his friends, collaborators, and his sometime BMInt editor. His seven “wonderful and horrible” years in Boston end next week with his departure to Basel for a post-doctoral stint in vocal accompaniment.

Colombat had chosen an unconventional concert venue for what was to have been pop-slanted Weill/Poulenc/jazz arrangements outing that he had been working on since August with baritone James Demler. Three weeks ago, Demler’s detached retina forced him to stop singing as healing progressed, forcing a late-game punt. Colombat wrote, “The good news is that I recently collaborated with an absolutely splendid soprano (Meredith Wolhgemuth) in New York for Renée Fleming’s Song Studio two weeks ago. We clicked so much that when I got the news from Jim last week, I called her, and we put together the program that will be presented Saturday.” They had done much of it recently in New York.

The Piano Craft Gallery, a very Spartan space with concrete floors, including a fire-charred upright piano which might have come from a Casablanca set, proved somewhat inhospitable to what, aside from a melodrama novelty number, had morphed at the last minute into a good but conventional song recital.

Ever the genial host, Colombat welcomed the 25 of us into his world with intimate palaver as well as superior music making. If he had been wearing spectacles, he could have been impersonating the namesake composer at a domestic Schubertiade. And why no shoes? He must have wandered in wearing boots without bringing any footwear other than black socks.

After the opening number, Schumann’s “Meine Rose,” from his 6 Gedichte von N. Lenau und Requiem, Op.90, the first half took its departure in reverse chronological order beginning with the 1925 angular, leapy, acerbic and atonal Drei Lieder op. 25 of Anton Webern. Colombat urged us to listen for the influence of 19th-century Lied. Such evanescent connections passed me by, though one understands that Berg, Webern, and Schoenberg co-inhabit a certain Viennese continuum with their forebears. Weber considerately set the stage for Schoenberg’s post-romantic Erwartung (Expectation), which in this context, made for easy and dramatic listening. Thanks to Schoenberg’s complex yet totally engaging setting of Richard Dehmel’s psychologically probing libretto (not as famous as the one he did for Verklaerte Nacht), this miraculous Jugendstil (1909) monodrama gives dramatic sopranos much scope to dominate, though not so dramatically as they must over the atonal orchestral maelstrom in Schoenberg’s unrelated atonal modernist-exemplar opera of the same name. Last night’s nolo-contendere performance found the soprano covering the piano too much of the time. Which is not to say that Colombat did not prove himself as a brave jouster, but his mount just didn’t measure up to the challenge. Wohlgemuth, in a well-focused and perfectly supported groove, gave a blowtorch-song rendition which won the laurels of the day. Next time she might consider adding a bit of movement and stage business to her stand-and-deliver manner in this number.

The duo closed the first half with passion, reverence, and ecstasy in Debussy: Ariettes Oubliée (Forgotten Songs) (1887). Wohlgemuth, singing everything from memory, gazed off into the middle distance, giving forth the aura of intense rapture as well as diva passion and frenzy. She floated some beautiful pianissimos and closed one of the six songs with a time-stopping diminuendo of regret. Colombat simulated the requisite Debussyian wateriness and timbres from the upright, while giving full support to the changes of mood and attentiveness to rhythmic and harmonic morphology. From frenzied acclamations to reverent lullabies, they encompassed Verlaine’s depictions of the circus of life’s changeable atmospheres.

Then came the evening’s novelty, a melodrama in new clothes from the pen of 20th-century modernist Ruth Crawford Seeger; she illumined the adventures of the immortal Tom Thumb in six brief cautionary tales, which interlaced evocative piano lines with dramatic declamation of inane but charming text. Melodrama and public oration retained some currency at the time Seeger was writing, unlike today, when either can seem arch or caricaturish. Demler’s resonant bass baritone reverberated in the room, and wisely he avoided falsetto when uttering words from the tiny tom or the mouse he rode in on. Rather, he spun out the fables fabulously, perhaps, he told us afterwards, because he had read the entire Harry Potter saga out loud to his young daughter. Colombat exhibited just the right lightness and naivete as he reveled in Seeger’s improvisatory-sounding interactions with the 300-year-old story; we enjoyed how he tone-painted Seeger’s depictions of events such as the menacing steps of the robbed king and the final blow to the crushed mouse with such spicy relish. One didn’t need to think about the modernist idiom of the composer’s language at all. The genre of melodrama with musical Schlagobers works for me. How about Liszt’s Lenore or Strauss’s Enoch Arden next time? Or Beethoven’s brief incidental melodrama with a glass harmonica part? 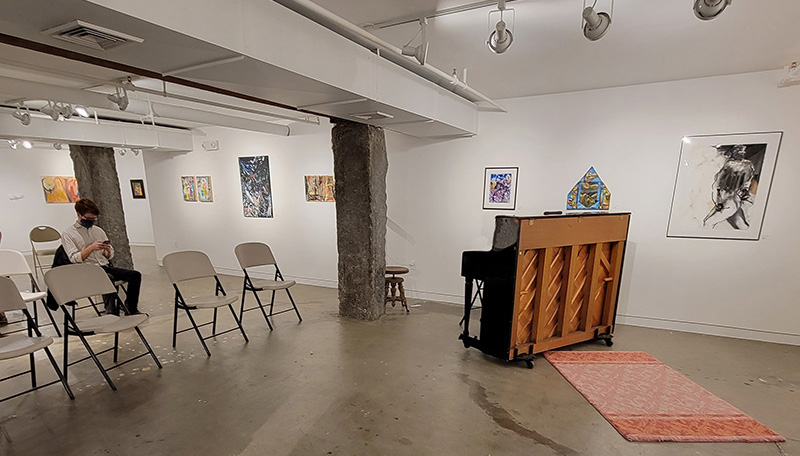 Colombat and Wohlgemuth then delivered six wonderful Schubert Lieder* (mostly to Goethe texts) with generous engagement, if not the most gemütlich effect. In a room with 25 friends, the artists could have managed a more direct, conversational intimacy such as we got when Colombat spoke to us. The songs felt fully realized and lived in (surprising after only three weeks) but lacked warmth of nuance. Frankly, Wohlgemuth’s polished and easily produced clarion tones seemed more fitting for an opera house. She has all the makings of star, including a true floated pianissimo, agility, and very attractive stage presence, but in Lieder we want more refined and differentiated expression and less to-the-back-of the hall projection.

Comments Off on Blowtorch Meets Piano