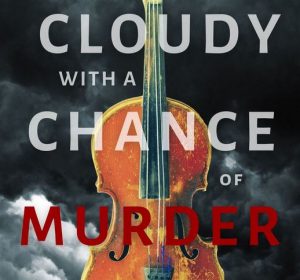 Other people may love the suspense of murder mysteries, I, though, often begin with the last chapter or two so as not to get too freaked out. Thus, doing a review of Gerald Elias’s “Cloudy with a Chance of Murder” (Level Best Books) challenged me. It was tough, but I resisted peeking at the ending, and I’m glad I didn’t.

If the aging, blind, curmudgeonly, crime-solving violinist and teacher Daniel Jacobus, “Jake,” existed, I’d like to have the privilege of knowing him, despite his quirks. In fact, after reading this seventh of Gerald Elias’s musical mystery series—Jacobus debuted in 2009—this one leads me to dream up other mysteries for him to solve. And Cloudy is likely to make you do that, too.

Cloudy starts almost too slowly for my taste, though it provides more-than-adequate foreshadowing. However, the presence of Jacobus’s former student, the intriguing Yumi Shinagawa (an Americanized Japanese violinist, who first appeared in Elias’s inaugural (2009) book, and is now immersed in an ascending career that may be upended here, adds tension. Fortunately, much to the relief of this reviewer, Elias ultimately delivers an abundance of clever, entertaining twists of characters, plot and fate, at the stormy fictional Antelope Island Musical Festival, located at the actual State Park of that name, a nearly magical place in the middle of Utah’s Great Salt Lake. Antelope features bison and other wildlife, trails, a mountain, a ranch and more.

If you do not already “know” him, Jake embodies qualities of Beethoven, bluffer and blowhard; his blindness allows his other senses to divine all manner of surprises, yet his life challenges, starting as a child of the Holocaust, his accomplishments and tragedies make him both Polonius-like and prescient. He is a steadfast friend, a caring, avuncular soul rife with ribaldry and poignancy.

The rich exchange of ideas and inside jokes about classical music, as well as clashes of egos and more will have seductive and salacious appeal to music buffs, but anyone will enjoy this absorbing read with its accelerandos and crescendos. Without spoiling the whodunnit, let me say that I was suspicious yet surprised.

For those of you who have directly experienced and/or witnessed the small village aspects of summer festivals—musical or otherwise—you will see people familiar to you. And a few you’d never have imagined. The melding of hikers, campers and cowboys, just adds to the amusement and (slight) terror.

Is the stormy setting even possible? Yes, indeed– a similar real-life storm actually destroyed a summer concert venue in Snowbird, Utah, some 30 years ago—but without the accompanying Chance of Murder. Having experienced Western hailstorms while hiking, I can believe the scene at Antelope Island. Similarly, once marooned at a summer camp by a hurricane at age 12, I think Elias describes the situation to a T.

While I might argue about a few of the clues and contrived blunders, the tale becomes gripping enough to stay up until 2 in the morning reading it in one go. Though the actual Antelope Island might well be a great place for a summer music festival, no-see-ums are there from May to December. Otherwise, this book might help give such a festival a buzz, so to speak.

While now based in Seattle and the Berkshires, Elias, formerly a BSO violinist and from 1988 through 2011, Associate Concertmaster of the Utah Symphony, as well as Music Director of the Vivaldi Candlelight concert series, and first violin of the Abramyan String Quartet, is an engaging raconteur and compelling composer and author. I only hope that neither Daniel Jacobus nor Gerald Elias will reach their expiration dates any time soon.

Julie Ingelfinger, a classically-trained pianist who studied at the Hartt School of Music, Aspen Music Festival and School and at Harvard, enjoys her day jobs as professor of pediatrics at Harvard Medical School, pediatric nephrologist at Mass General Hospital for Children and deputy editor at the New England Journal of Medicine.

Comments Off on Yumi and Jake at Antelope Island: Whodunnit?