Boston Baroque observed this New Year’s Eve with a dark symphony, a bright concerto, and a spoof on the operatic intermezzo, featuring contemporaries Mozart (1756-1791), Joseph Boulogne Chevalier de Saint-Georges (1746-1759), and Domenico Cimarosa (1749-1801), respectively. Friday’s concert, a chronicle of sorts, reported apposite brooding over the pandemic that gave way to fierce optimism and that, in turn, to an abated merriment.

After having to break last year from a long and acclaimed tradition, Music Director Martin Pearlman, violinist Christina Day Martinson, baritone David McFerrin, and some 30 players on period instruments livestreamed from GBH Calderwood Studio. The concert was also live to a limited number of face-to-face celebrators.  I watched online [HERE].

Pearlman wrote about Symphony No. 40 in G Minor, K550. “This G minor symphony was already popular and highly esteemed in the early 19th century, due not only to its brilliant writing but also, no doubt, to its ‘romantic’ qualities, among them its unusually quiet and agitated opening and the dark color of its minor key. (It was one of only two Mozart symphonies in minor.)”

This, the third performance of this Mozart, as listed in Boston Baroque’s 47-year history, awakened ears by way of extraordinary robustness and breathtakingly uncommon voicings. The opening Allegro molto came with drama from every single corner of the orchestra. With the slower Andante in the major key came highly articulate counterpoints, cheerful at times, and deeply expressive harmonies. A stout, remarkably incisive Menuetto, in minor key, cadenced gently for a fine lead-in to the lighter Allegretto in the contrasting major key. Finale: Allegro assai burned with energy and urgency with promises of brighter times, the horns making a standout announcement. Matchless Mozart from Boston Baroque. 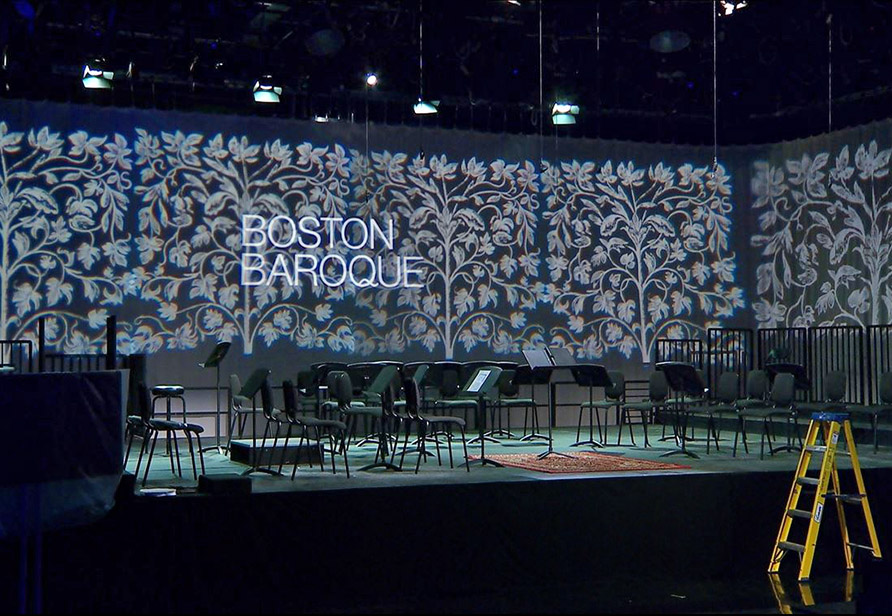 Violin Concerto in D, Op. 3, No. 1 by Joseph Boulogne Chevalier de Saint-Georges has become a part of Boston Baroque’s repertoire. Pearlman introduced us to the newcomer who “has his own voice.” The composer’s father was a white plantation owner and his mother one of the plantation’s black slaves. Recognizing Joseph’s talent, his father took him to Paris where he became a prolific composer and virtuoso violinist admired by Mozart, among others. In short, Joseph Boulogne was a personnage extraordinaire.

Turning ears to the violin, Christina Day Martinson delivered the three-movement concerto in ideal style, near flawlessly. She played the Boulogne concerto with a fierce virtuosity that brought those at Calderwood Studio to a boisterous reception, hands clapping and feet stomping.

“Il maestro di cappella (The Music Director),” Pearlman notes, “like Mozart’s The Impresario, is about the music business.” This was the fifth all-time Boston Baroque’s concert performance of Pearlman’s own orchestration from the surviving piano score by Cimarosa. The intermezzo portrays an imperious maestro rehearsing an aria with the orchestra, at times imitating various instruments—and he’s even late in arriving. Baritone David McFerrin and Boston Baroque were stiff. If you did not know this was a comedy, you would have imagined quite a different scenario. McFerrin, Pearlman, and Boston Baroque, though, conveyed the Cimarosa in an artistic light.

A fine touch from GBH was the floral backdrop. It provided a strand of visual continuity, evolving from white-on-black in the opening work, to orange-on-black in the ensuing concerto, complementing the soloist’s attire, then transforming to green-on-black for the intermezzo.

David Patterson, Professor of Music and former Chair of the Performing Arts Department at UMass Boston, was recipient of a Fulbright Scholar Award and the Chancellor’s Distinction in Teaching Award. He studied with Nadia Boulanger and Olivier Messiaen in Paris and holds a PhD from Harvard University. He is the author of 20 Little Piano Pieces from Around the World (G. Schirmer).  www.notescape.net