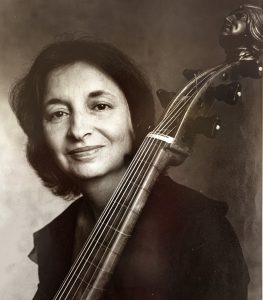 The Sacred Muses lament the passing of the Grande Dame of the Viol.

The Early Music Movement recently suffered the loss of a major pioneer: Judith Davidoff passed on peacefully at home in New York City, at the age of 94, one month after her teacher and New York Pro Musica colleague, Martha Blackman. Considered to be the “Grande Dame of the viol,” Judith began her musical journey as a cellist in Boston, where she was born, raised, and educated. Also in Boston she became familiar with the Camerata of the Museum of Fine Arts, later known as The Boston Camerata, an ensemble that specialized in performing music from the Middle Ages, Renaissance, and Baroque periods on the instruments for which the music was intended. The American early music movement began to gather momentum in the mid 1950s, enthusiastically embracing newcomers like Judith. As a cellist, she accepted encouragement to take up historical bowed-string instruments, and the viola da gamba became the instrument with which she would become identified. Judith’s journey included residencies in both Turkey and Taiwan, studying the kemençe (a Turkish Black Sea fiddle) and the erhu (a Chinese fiddle), and she performed and taught at the Boston Museum of Fine Arts before settling in New York. The Boston Museum also allowed her access to instruments such as the vielle, nun’s fiddle, and the baryton, expanding her knowledge as an early bowed-string specialist.

Noah Greenberg invited Judith to become a member of the New York Pro Musica sometime in the early ‘60s; she performed with the ensemble on its legendary Soviet Union tour in 1965.  After Noah Greenberg’s death and the ensemble’s demise, Judith created the New York Consort of Viols, served as a founding member of Music for A While with LaNoue Davenport and Sheila Schonbrun, performed regularly with the Waverly Consort, and cultivated a robust private teaching studio.

I first met Judith in NYC after graduating from Vassar College and settling on Manhattan’s upper west side.  I was looking for a viol teacher and had heard of Judith Davidoff through my college viol teacher Grace Feldman and through Judith’s work with the New York Pro Musica and the Waverly Consort. We did not have the convenience of the internet at that time, so I found a Waverly Consort recording of the “Cantigas” which featured Judith. There she was on the cover, dressed in elegant medieval attire and posed as if about to use her vielle bow to pull Katherine Hepburn off the set of “The Lion in Winter.”  Because she appeared so intense, serious, and intimidating in those images, I was a bit stunned when I finally met her in person. She was quite small in stature, gracious, and soft spoken with a distinct Boston accent. I continued my studies with her encouragement in the historical performance master’s program at Sarah Lawrence College and on many occasions, drove Judith to and from Sarah Lawrence.  During these commutes I really got to know her. Very much down to earth, she possessed a wry sense of humor, telling many stories, delivered with a deadpan expression and punctuated by her distinct and sophisticated Boston accent.

Judith methodically groomed me for a professional career. In my first gig with the New York Consort of Viols I played an “In nominee” line (a slow-moving cantus firmus melody around which others play elaborate polyphony). She eventually moved me up to a lyra viol solo from the Manchester Viol Book which she invariably assigned me when The Consort programmed it.

I also shared the stage with her for my first concert with The Waverly Consort at Alice Tully Hall. I remember crossing my leg over my knee and leaning forward so I could hear those performing more clearly. Judith took one look at my demeanor, and during intermission whispered, “You are doing very well, but don’t cross your legs on stage.” Just as we were starting the second half of the program, she looked at me and nodded with approval, and then Wendy Gillespie, sitting next to her, proceeded to cross her leg over her knee in a dramatic gesture and lean forward just as I had.  Judith looked at me and shrugged her shoulders as if to say, “Oh well!”

Sometime in the last century, I joined the New York Consort of Viols on a tour of Turkey, where Judith earlier had perfected her skills on the kemençe. She had also developed a friendship with a visual artist who painted her portrait that hung over the mantelpiece in her music studio and now hangs in her son’s apartment. We had a wonderful dinner at the home of the painter, the perfect personal touch to our tour of Ankara and Istanbul. Judith communicated with her friends in French, blowing me away with her ability to speak so fluently without losing her Boston accent.

A lecture Jack Ashworth gave one summer at the Viola da Gamba Society of America Conclave on the similarities between bluegrass and early music, further cemented her extraordinary talent. Jack played a recording of Judith executing an incredible, brilliant improvisation on “La Bounette,” an anonymous dance from the Mulliner Book. You could imagine her fingers flying, as she distinctly played each note, while giving great shape to phrases. Jack then presented Judith, in what he termed “mano-a-mano,” with fiddler Paul Warren of Flatt & Scruggs, playing “Earl’s Breakdown.” Switching back and forth between the two, he created a hilarious musical duel between them, one-upping each other in separate worlds and I couldn’t help but create a vision of Judith wearing a wimple and veil while Paul sported a 10-gallon hat.

One of my last memorable experiences, a few years ago, was interviewing Judith about the Pro Musica tour of the Soviet Union. I was researching the presence of African Americans in classical music and Noah Greenberg had hired African American percussionist, Fredrick King, for the tour. Judith remembered that she and Frederick decided to take a walk around Tbilisi and discovered a “lovely farmer’s market.” As she turned to say something to him, she realized he had disappeared. However, in the distance she found him in the midst of a crowd of curious Tbilisi citizens who were just staring at him in silence; she said that this must have been the first person of African ethnicity they had seen in the flesh.

My relationship with Judith further strengthened my development as a professional viol player. That she embraced me and regarded me as a serious student at a time when there were few African Americans in this profession, pleased me very much. In her presence I never felt marginalized or isolated as an anomaly because of my ethnicity. When the going did get rough in that respect and my interests were challenged, Judith’s conviction for my success gave me the strength to weather those unsavory moments. This is what one hopes for in a music teacher because, as we all know, the qualities of a good musician go beyond just technical facility. Judith lent me the confidence to realize my own dreams, leading by example with her talent, encouragement, engaging personality and humor, and she offered the same support to many others who had the opportunity of studying and/or playing with her. So I wonder if Judith might agree that her legacy may be best expressed by Langston Hughes in his poem “Dreams”: “Hold fast to dreams, for if dreams die, life is a broken-winged bird that cannot fly. Hold fast to dreams, for when dreams go, life is a barren field frozen with snow.”

Patricia Ann Neely (viola da gamba, vielle, violone) has appeared with many early music ensembles and is director of Abendmusik, New York’s Period Instrument String Ensemble.  She is also on the Board of the Viola da Gamba Society of America and chair of its Equity, Diversity, and Inclusion Committee.