A Shining Princess and her glorious Knight…alighted on stage for a performance of Brahms’s rarely heard early masterwork, his only song cycle which he titled simply Romanzen (after Tiek’s Magelone). The concert for the Harvard Musical Association on December 10th will stream HERE in 4K high definition for some time. The Association’s YouTube Channel provides many other pleasures as well.

More commonly titled Die schöne Magelone, the German word “schön” translates as “beautiful” in English, but in the German carries a plethora of other associations as well, and in poetry suggests an alliterative connection with so many other similar words that reflect radiance and shining light. Brahms was an avid reader, and several of his early works were inspired by the German translations he read by well-known literary figures. Ludwig Tiek’s 1797 translation of this courtly romance from Provence dating back to the age of the troubadours of the Occitan and republished in 1812 inspired Brahms to set 15 of the 18 original poems which were interspersed amidst the prose text. 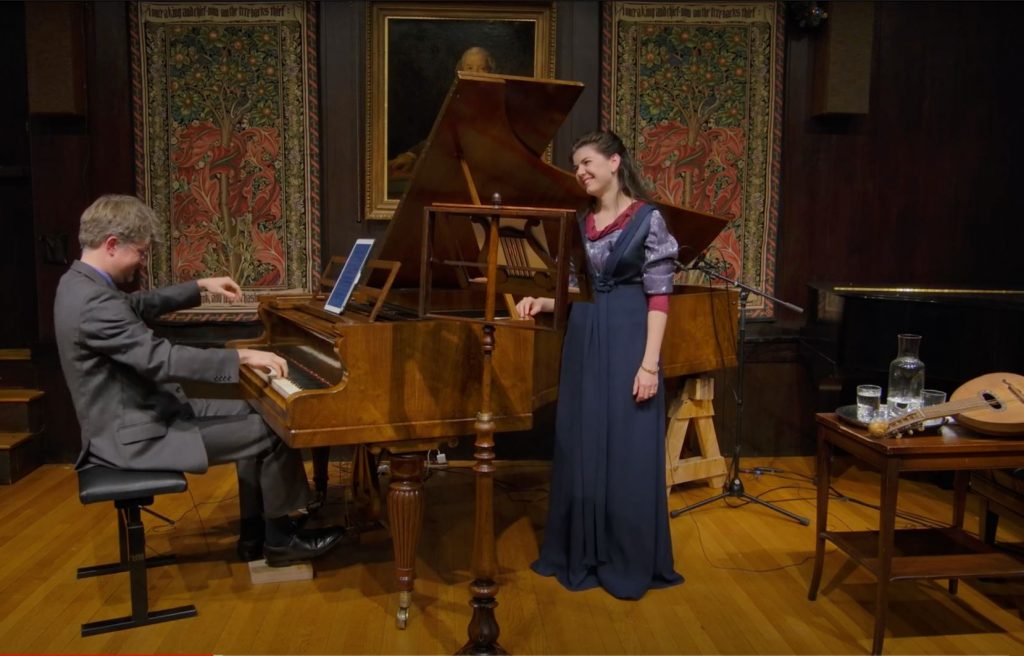 At this point in Brahms’s output (the Magelone cycle is opus 33 and was written between 1861-2 and published in 1865) he had already set a great many folksongs, mostly German, but some Hungarian, and had composed several works in the ‘heroic’ style of his early period, such as the Ballades, the first Piano Concerto, and the three piano sonatas. Both elements are present in this work, as is a definite kinship and affinity for the Lieder of Schubert (a number of which he was simultaneously performing and arranging with additional instruments or full orchestra), also Schumann, a friend whose chamber music he arranged for two pianos, and Beethoven, especially the cycle An die ferne Geliebte, which seems to be most closely the model which Brahms sought to emulate in this cycle. Brahms is sensitive to the most intimate details of these works, by remolding and reshaping their most important motives, intervallic successions, harmonic progressions, and inner rhythmic movements and merging them into his own.

This in no way suggests a lack of originality in his composition. On the contrary the unique way in which he handles rhythmic syncopation to drive the music forward, the thick orchestral style of writing for the piano that creates an unmistakable ‘Brahmsian’ sound, a preference for certain ‘reaching’ intervals of yearning, desire, and passion, the dark close harmonies of lower registers opening up and flowing outward and upward, accompanied by the sweeping melodic lines that will eventually mark the more mature works of this great introspective composer, while the music itself stays always rooted in the German ‘Volkslied’ from which it sprang forth. Perhaps Brahms most unique gift is his treatment of the German language itself, taking what is considered a language of hard and harsh, often guttural, sounds and setting them in such a way as to create a beautiful and poetic flow of word and inflection, so that the rise and fall of each syllable wafts as if on a gentle breath and becomes a part of the singer and his or her natural world.

So far I have said nothing of the performance itself, yet these details could only become evident due to the most sensitive and excellent rendering as was offered by the husband and wife team of soprano Lucy Fitz Gibbon and Ryan MacEvoy McCullough playing a Johann Baptist Streicher Viennese piano from 1857, courtesy of the Cornell Center for Historic Keyboards. Streicher’s pianos were held in high esteem by Brahms, who used them almost exclusively in his Viennese recitals around the time of the writing of the Magelone cycle. The authentic sound of the piano, powerful yet never overpowering, played with high artistry in a beautifully reverberant space, created a perfect wholistic texture one with the voice, Fitz Gibbon delivering a dramatic and sensitive performance that not only radiated her glorious voice, but through her gesture and facial expression to ‘become’ the story itself, literally “shining” as the title of the work suggests, the princess fair and priceless, an ‘Immortal Beloved” in the ideal of the Romantic era, loved, lost, and reclaimed once again by her Prince, the Knight Peter of Provence.

Fitz Gibbon and McCullough artfully condensed the lengthy prose story coming between the poems in Tiek’s original into a highly effective narration, creating an evening-length (90-minute) continuous drama. Brahms had not required this, likely because the popular story was so well known among his circle of performing friends; for audiences today, though, the readings created a wonderfully melodramatic guide to understanding the work as a whole and added a significant layer of appreciation of it, especially through the efforts of artists who were able to summon and enliven several distinct personalities in their speaking roles. After all, who does not appreciate a chivalrous story of love and derring-do? The cycle ends both mirroring and inverting its beginning, bringing us full circle to a sense of completion, and to quote a line near the end: “And heavenly joy enchanteth and haunteth the yearning heart.”