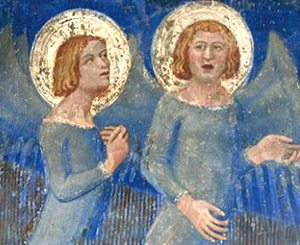 It’s “A Medieval Christmas: Hodie Christus Natus Est” yet again for our Boston Camerata friends…on disc, and in person. The concert upcoming next Friday is officially sold out, but reprises come to Newburyport on Saturday and at First Church Cambridge on Sunday. The cast includes Anne Azéma, Camila Parias, Deborah Rentz-Moore (voices), Allison Monroe (vielle) and Christa Patton (harp and winds).

Channeling Christmas spirituality from Medieval France, Italy, England, Provence, the show includes music of the church and songs of private devotion around the joyous theme of the Nativity, songs to the Virgin Mary, processionals from Saint Martial of Limoges, hymns, lyrics, and miracle ballads, sung in Latin, Old French, Old Provençal, Saxon, interlaced with Medieval English texts of the Nativity. The ticket-info link is HERE.

FLE: Congrats, Anne, on the new Harmonia Mundi recording. But the dinosaurs among us will note that this is the second Boston Camerata to bear the title “A Medieval Christmas.” Is the needle stuck?

AA: Hopefully, not, although our own copy of the 1975 Nonesuch LP is by now pretty scratched. Actually, I discovered this signature Camerata program when I was still a student, on vacation in the Languedoc. There was a summer music festival in Sommières, the town where my mother had grown up, and this unknown bunch of Americans were scheduled to perform in a tiny Romanesque chapel. I had never heard any music like it, and I was enchanted. There was something so real and immediate about the repertoire, and the performance. It sparked something inside me.

Eventually, I came to Boston to study early music at the New England Conservatory. I met Daniel Pinkham, and the musicologist Anne Hallmark, and the sitar player/guru Peter Rowe. I also joined the Boston Camerata as a chorus member, and observed the Medieval Christmas production, season after season, as it evolved from the program we know from the Nonesuch recording, advancing in performance style, incorporating new works, but always maintaining the sense of awe and discovery that I had first witnessed in the little chapel.

So the new CD represents some intermediate year in the long Medieval Christmas production history?

It represents the year 2021! Post Covid and all! This is my own vision of a medieval nativity celebration, incorporating my own repertoire choices, casting, and my sense of an appropriate sound picture.

It’s very invigorating to rethink and reimagine the musical and human possibilities that can be realized meaningfully under the program’s title. I remember, when the great Gunther Schuller honored the original Nonesuch recording, by transcribing it note for note and then publishing it, as he did for Ornette Coleman and other jazz masters, how Joel, viewing Mr. Schuller’s score, scratched his head in befuddlement. “On the page, it looks like Brahms,” Joel said. The Schuller edition won a prize, surely well deserved, but it was a Polaroid of an instant in time, as are all our performances.

In any case, we now include, in the recording and the upcoming performances, a number of works that have been intrinsic to Medieval Christmas over the years, and that our old friends will recognize, starting with the story of the wise and the foolish virgins, sung in Latin and medieval Occitan. But there will also be beautiful things that will be new to you, and to us. I was particularly interested this time in the feminine side of the story, and so there will be a number of songs about and around the Virgin Mary. And, as well, an all-female cast!

Are you thus playing catchup to current fashion?

The music we choose is eternal, and the presence of high singing voices is as old as the stones of the old chapels. As happens in every generation, we draw from history those aspects that resonate within us, as men and women of today. The middle ages are part of who we are now. When we sing to the mystery of maternity, we are calling up something that already exists inside our souls. Let it fly!

The Boston Camerata requires patrons to be fully vaccinated and to wear a mask at all times in the concert venue. We recommend that unvaccinated patrons consider buying online tickets. More information at bostoncamerata.org/staying-safe.