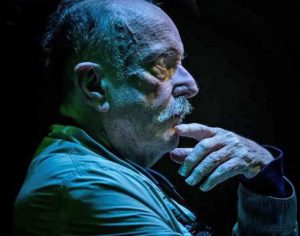 I knew the avant-garde composer from Lukas Foss’s composition class at Tanglewood together in the summer of 1959. Lucier was the next-oldest in the group (I was the youngest, a mere college junior) and remained pretty much aloof from the rest of us — Lita Dubman, Michael Horvit, Roger Hannay, Bob Baksa, and the Canadian Jacques Hétu; Gunther Parchman, a bass player from Louisiana, joined us from time to time. A New Hampshire native, Lucier had a Yale degree and was about to complete another at Brandeis, so he was also a local boy.  I remember his music from that summer as rather 1920s Parisian in quality, diatonic, with lots of bright notes.  We all had our music read by Fromm Foundation players — Fromm Week didn’t exist yet, but fellowship players included woodwinds and what later became the Lenox Quartet.  An amateur musician, Jack Lund, a delightful businessman and record collector with some extra money, came visiting and took us all to dinner, bringing news of a small commission at Foss’s recommendation, and it was Lucier who at summer’s end took home the award.

Only some years later did I hear about Alvin Lucier’s off-the-deep-end experimentalism.  My Reed College colleague Nicholas Wheeler, a physicist and a good cellist, had corresponded with him.  Lucier’s plans included equipping helicopters with huge speakers and microphones, to hover over cities during rush hour, record their traffic sound, and retransmit it back to ground level. The power consumption must have been enormous; whether the rebroadcast could have coped with engine noise, I never found out. Lucier surely would have known of George Antheil’s work with airplane propellers in Ballet mécanique, though Stockhausen’s Helicopter String quartet came half a century later. Later Lucier became a professor at Wesleyan.

David Reed Bloch’s Galimathias Musicum at Portland State College (later University), later called Group for New Music, specialized in the avant-garde.  William Bolcom’s Session II premiered there in 1966, and Charles Boone’s Starfish got a second performance.  But in spring 1968 Alvin Lucier’s signature work, the newly-composed Music for Solo Performer for amplified brain waves, created something of a sensation when we performed it at Reed — it may have been the second performance anywhere. A multichannel amplifier distributed deep shimmering impulses to speakers placed an inch away from bass drums, tamtams, and cymbals. The Solo Performer, local bassist Wayne “Froggy” Hearne (his brother Joseph still plays bass in the Boston Symphony), sat on a chair in a darkened room, wearing electrodes on his scalp, and the waves would ebb and flow when he closed or opened his eyes. It was fun to watch, and agreeably quiet overall, though the low notes burned out the woofer on my beautiful KLH 6 speaker.