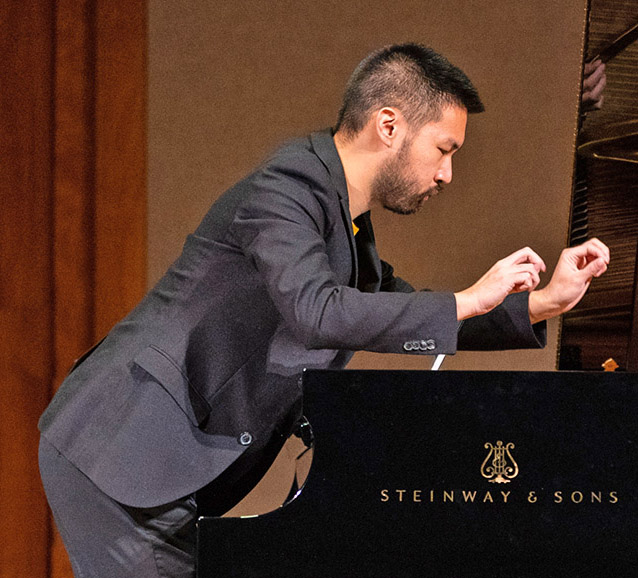 Conrad Tao returned to the Celebrity Series last night for a recital at the Longy School’s Pickman Hall. Tao’s captivating program, even if at times remarkably similar to his April Celebrity Series concert (reviewed HERE), gave us [I attended via livestream] a tour-de-force through a long history of virtuosic piano music.

As in April, Tao began with an improvisation on China Gates, composed by John Adams in 1977. Then and now, Tao, rather than starting in with China Gates itself, bookended Adams’s composition with his own material. Tao employed a range of extended techniques, plucking and preparing individual piano strings with magnets for a Cagean atmosphere. This soon gave way to great waves of sound before Tao played through China Gates seemingly as written, with the addition of the magnets still buzzing in the soundboard. Tao described how, months earlier, he placed these magnets in the piano during the evening, forgetting about them overnight, and returning to China Gates in the morning. He enjoyed the serendipitous sound world they created, arguing that preparing the piano this way created an “incidental layer of sound that illuminated how Adams uses patterns.” While the celestial addition provided a new look at this now-standard work, the percussive noise, especially on the high A♭/G#, often obscured the sheer power of Adams’s constant pivot to and from the (roughly) parallel minor.

Still, helped by Adams’s resonant bass notes, Tao gave an impassioned reading of the work itself that accented longer melodic lines. Continuing in Adams’s idiom, Tao smoothly transitioned again into his improvisation before ending abruptly, echoing the sudden finality of the original. Tao talked at length about how his immersion in improvisation during the pandemic shutdown provided a chance to “listen to the world around” him, staying truer to himself and his environment. But I couldn’t help but note how David Moran’s review of Tao’s April performance (again, HERE) describes an almost-identical take on China Gates; now that he’s returned to the concert stage, has Tao codified his earlier improvisations? A chance to hear his musical imagination working extemporaneously would be more welcome, especially on the same piece twice in a single year.

Berklee graduate Jason Eckardt’s “Antennaria plantaginifolia” takes its title from the scientific name for pussytoes (a type of flowering plant) invoked a continual “pussyfooting,” or stealthy movement, around the keyboard. Written for Tao this year, Eckardt’s short work is part of the composer’s six-piece collection of works for different solo instruments, A Compendium of Catskill Native Botanicals. Much of Eckardt’s oeuvre is apparently influenced by “self-organizing processes in the natural world,” including, it seemed, this one. Contemplative at heart, “Antennaria plantaginifolia” was much sparser than any other work on Tao’s program, but simultaneously contained an unparalleled degree of virtuosity. Eckardt’s kaleidoscopic rhythmic filigree, interrupted by regular pauses and long trills, provided many moments of enigmatic and engrossing reflection.

Unlike for China Gates, Tao’s improvisation on J.S. Bach’s Wenn wir in höchsten Nöten sein, BWV 641, started with the theme. Tao’s take on this tragic chorale (the first line translates as “When we are in greatest need”) was primarily somber, but BWV 641 is highly ornamented, giving any improviser plenty of leeway. With shades of Keith Jarrett alongside Liszt and Chopin in an expressive climax, Tao returned to the Baroque at the end. Throughout, he demonstrated his deep knowledge of the harmonic and melodic potential of Bach’s masterful counterpoint. Hearing this new addition to a long history of keyboard improvisation on chorale themes was delighting.

In Schumann’s Kinderszenen, Op. 15 (1838), a set of 13 pearls, each shining miniature contains what Tao termed “dreamy windows” of Schumann’s looking back on these scenes from childhood. Tao’s thoughtful readings emphasized the delicacy and wistfulness of Schumann’s writing. He softened even the most triumphant movements like Wichtige Begebenheit and Ritter vom Steckenpferd, while the famous Träumerei took on an illusory glow and the final movement, Der Dichter spricht, gently died away.

For something completely different, Tao gave the New England premier of his own Keyed In, which the Celebrity Series co-commissioned. Tao avowed interest in examining the “tension” between the harmonic series—in his words, “the acoustic principle that occurs in every sound we hear”—and the “imposed 88 key-frame” of the piano. But he quickly added that, rather than finding fault in the construction of the instrument, Keyed In is “a love letter to the piano.” Beginning and ending in the deepest reaches of the keyboard, Tao’s first melody was not built on the consonance of the first pitches in the overtone series, but instead used the semitones that dominate later intervals. This clash gave the piece a similar sound to Donnacha Dennehy’s related experiments with the overtone series in Overstrung and Stainless Staining. Yet in Tao’s case, a gentle, songlike—even jazzy—melody rose from the mire several minutes later, leading to a tender and profound close.

Beethoven’s grand and imposing Sonata No. 31, Op. 110 closed the concert. Beethoven’s penultimate sonata, from 1821, or six years before he died, is emblematic of his late style, with an exultant ending achieved only through great struggle—in this case an extended A-flat-minor arioso and two fugues. Beethoven had already been resisting his deafness for several years and was on the cusp of completing some of his most famous works, including the Diabelli Variations, Missa Solemnis, and the Ninth Symphony, when he penned this sonata.

Beethoven lays down a gauntlet of challenges for the pianist, from the opening ornamentation to closing arpeggiated accompaniment. Tao met them all in stride. He even added the occasional trill in his rhapsodical take on the second movement that accentuated Beethoven’s extraordinary use of contrast. But Tao sounded his best with the serpentine fugues in the last movement, attentively voicing each subject with a range of individual characters. Tao defined the fugue as a “churning through” of musical material, but there was little sense of any agitation here; instead, he effortlessly navigated to a cathartic reading of the chorale apotheosis.

Tao encored with jazz pianist Fred Hirsch’s Pastorale, an homage to Robert Schumann. Hirsch weaved together dreams experienced during his 2008 coma from HIV, fitting as Tao’s recital fell on World AIDS Day. Prefaced by a reading of AIDS-related nursery rhyme-as-comic “Worrywart and Nevermind,” Pastorale ramped up the nostalgia but contained a latent call-to-action.

Even with many echoes of his previous performance (a magnetic China Gates alongside an Eckardt piece and Schumann cycle), Tao’s interweaving was ultimately satisfying. In his short program notes, Tao mentioned that he curated the program with works he conceived of or wrestled with during the pandemic. Schumann’s “dreamy windows,” in this context, thus represented how “the pre-pandemic landscape feels like a previous life.” For this theme, there was no better way to end the program than with Pastorale: a fond look to the past with hope for a better future.

Tao’s performance will be available online until December 7 at 7pm HERE.

Gareth Cordery, a second-year Ph.D. student in Historical Musicology at Columbia University, majored in Music and History at Middlebury College. He has performed piano concertos with symphonies across the United States, and lives in New York City.

Comments Off on The Feng Shui of Tao