A half-full, fully masked Jordan Hall hosted a half-masked (the winds covered themselves in glory but not PPE) Boston Symphony Chamber Players contingent which did justice to an eclectic assortment of music by four women composers on Sunday afternoon

Jennifer Higdon’s Autumn Music, composed in 1995 in frank admiration of the 40th anniversary of Samuel Barber’s Summer Music for wind quintet (with English horn and bass clarinet), is an agreeable, 14-minute assembly of pandiatonic trills, scales, and calm reassurance. I wasn’t sure whether it was in two movements or three, but a flute-clarinet duo traded dialogues with oboe-bassoon on the way to what seemed like a berceuse with bass clarinet and English horn, rocking above a low E, very soothing.

Boston’s own Marti Epstein was present to hear her Komorebi for oboe, clarinet, and violin (2017). She describes the name “from a Japanese word for the effect of sunlight shining through the leaves of trees,” and in the unsystematic repeated permutation of pitches, E-G-A-B♭-B-D in different registers, occasionally smeared with others, one could imagine the gentle falling of those leaves without a stirring breeze. The zen-like swells < > around individual sustained tones added color to her seven gentle minutes of minimalism.

The ensemble explored a sternly impressive and even dramatic dimension in Shulamit Ran’s 2008 Lyre of Orpheus for string sextet. Long-held single notes sustained complex chords, repeated pizzicati, solo cadenzas, and accelerating bundles and crunches of sound alternated with perceptible fragments of nigun like a “cry in the wilderness” (the composer’s note reads “sorrowful yearning,” which is what we expect from a despairing Orpheus). A fearsome sound of the second cello with its C-string turned down to A often obtained, as did an equally fierce tone of the first cello projecting above the midrange ensemble with virtuoso assertion. Near the end, an upward vanishing into ultra-high harmonics became ethereal and led to a conclusion with the cello alone. 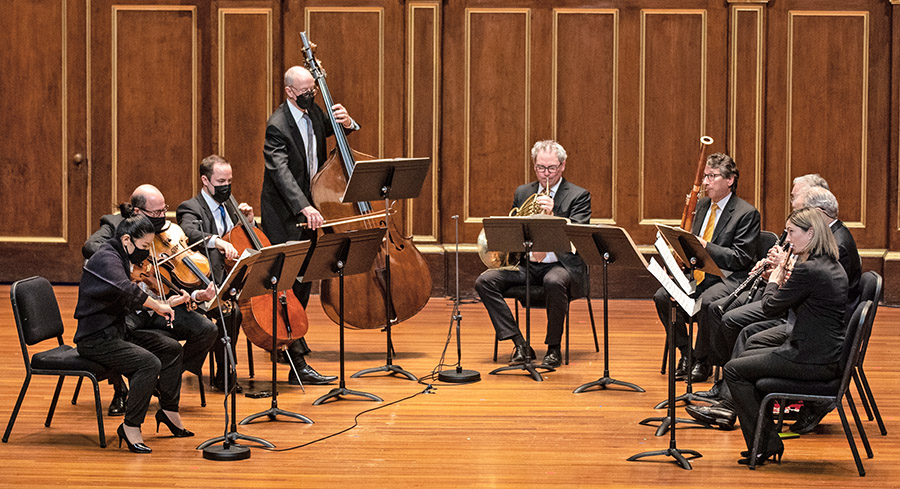 The afternoon’s major offering featured the resurrection of an 1850 Nonet, op. 38, for wind quintet, violin, viola, cello, and contrabass by Louise Farrenc, née Dumont (1804-1875). Farrenc has commanded local attention because Handel + Haydn had just performed her well-wrought Symphony No. 3 in G Minor, op. 36 (1847); but others remember her as the editor and publisher (with her husband) of a 23-volume collection of keyboard music, Le trésor des pianistes, which I believe is still in print. (I remember the first time I heard of Farrenc, probably in 1958, at a reading of her Trio for flute, cello, and piano at a private home in Cambridge; the flutist was Carleton Sprague Smith, then head of the Music Division of the New York Public Library, and his daughter played the cello.) Farrenc’s handsome Nonet in E flat Major reminded me of other amiable works for winds and strings from roughly the same period — the similar Nonet in F by Ludwig Spohr (1814), the Septet for wind quintet, contrabass and piano by Georges Onslow (1852), and even the Grand Septet by Franz Berwald (ca. 1828) that the BSO Chamber Players gave us in March three years ago. It can be argued that Schubert’s Octet and Beethoven’s Septet are grandparents of all of these, but Mozart’s wind serenades are part of the sonic history as well. In Farrenc’s Nonet, both the first movement and the finale are marked Allegro preceded by an adagio introduction; the first movement develops with particular interest and skill, and with some elegant solo work for the cello. The second movement, a set of five variations with coda, begins with a beautiful theme in B-flat major, worthy of Haydn, 8 + 8 bars repeated. The Vivace scherzo, in C minor, features a lot of fast pizzicato, with a Trio in C major, first with viola and woodwinds, then with horn and violin. The finale includes a lively fugato development, and the entire movement, very much like the work as a whole, is proportioned just right. Harmonically and formally, it belongs to the era of Mendelssohn rather than Wagner, but its French elegance is apparent in every measure; it points the way to the well-known Petite symphonie of Gounod, composed 35 years later, for double wind quintet.

This relatively short concert had no intermission. A well-annotated program folder, six octavo pages long, include a four-page handout of 16 unidentified religious poems in blank verse, unconnected with the music and serving no purpose that I could discern; I assume it was a tract, intended for some other concert. [BSO confirms that it had no roles in this stealth insertion. We wonder how many programs had thus been larded.]