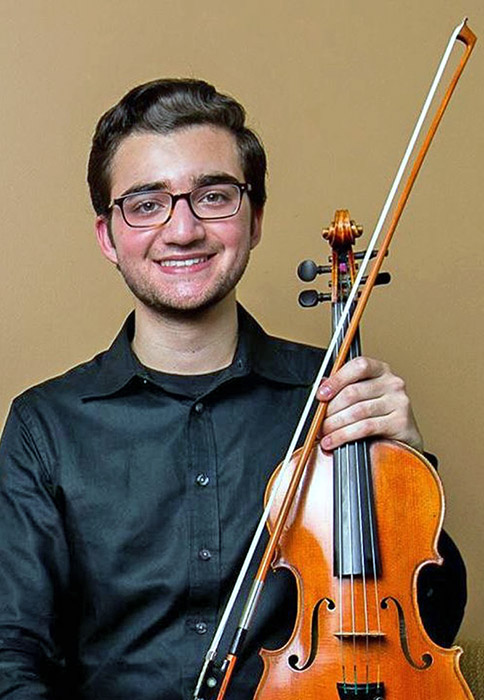 In the midst of a car-wash caliber rain, Music for Peace of Massachusetts Peace featured the young Boston-bred string phenom, violinist Samuel (Sammy) Andonian, now a master’s student at Juilliard in the studio of Catherine Cho. The able Alice Chenyang Xu, a doctoral student here at NEC, collaborated. Andonian, whose musical life began with cello at age four, to which the violin was added 4 years later, delivered a sonorous, sweet tone and masterful phrasing, auguring many more appearances. Xu’s innate musicality and synergetic nature further enhanced the evening at Harvard-Epworth Methodist Church in Cambridge. Their playing announced maturity far beyond their present scholarly pursuits. We will welcome hearing more from both.

The artists began with Mozart’s B-flat Major Sonata for Piano and Violin no 32, K 454, written in Vienna in 1784; it provides signal equality of instruments which Haydn, Beethoven, Schubert and others followed. Xu enhanced the opening adagio with incisive yet well-arched musicality, shortly joined by Andonian, with instantly evident tone and musicality. The equality of the parts in the first movement then flowed forward into a rollicking interplay, well shared by the two. The second movement, Andante, initially planned by Mozart as an Adagio (crossed out in the score) includes strong chromatic modulation. The intricate closing Rondo, with sophisticated harmonics, cast quite a spell. K. 454 lures lesser players into over-phrasing; here, however, the ensemble and tone wafted both gemütlich and harmonic.

Andonian then essayed Inscriptions, for solo violin, written in 1991 by the Israeli-American composer Shulamit Ran—commissioned by and dedicated to Samuel Magad the then-co-concertmaster of the Chicago Symphony Orchestra. Reflecting the seriousness of notes (and words) carved in stone, Ran’s composition created three irreverently-titled movements—“Possessed by the Devil,” which confers an evocatively Devil’s Trill mood; “Rondino, Mostly Tongue-in-Cheek,” a humorously unusual rondo form (A B A1 C A2) requiring difficult strum pizzicato and Bartok pizzicato; and a finally, a lyrically-minded “Upsurge.” The work provides many challenges, and Andonian took them all on with brave success.

In 1853 Clara Schumann wrote Three Romances for Violin and Piano (Opus 22), which she dedicated to Josef Joachim, and subsequently played with him. Lush, poignant and unique, it consists of three romances—an Andante molto, Allegretto and Leidenschaftlich schnell. Throughout, Andonian with Xu, created a lush, dreamy mood. The Andante, which features dialogue between the violin and piano, with reference to Robert Schumann’s First Violin Sonata, soared melodically. The second section ties the work together and includes wistful syncopation with shimmering regret yet ensnaring emotion. The final romance reprises the fast and effervescent pace of the first, with tuneful melodic violin passages and a rippling, if incessant arpeggiated accompaniment for the piano. The work ends with the violin’s lower register and sonorous tonic piano. The collaboration between Andonian and Xu lent pleasing balance here.

Andonian shone in Bach’s Violin sonata in A Minor (BWV 1003) following intermission, arguably the centerpiece of the concert. One of six works for solo violin completed in 1720, the A minor comprises four movements in the sonata da chiesa form (slow-fast-slow-fast—in this case, Grave, Fuga, Andante and Allegro.) These Bach masterpieces now hold a central place in violinist’s repertoire. Andonian signaled mastery beyond his years; his physical parsimony belies the strength and depth of his interpretation.

The peace offering ended with Wieniawski’s Opus 15, Variations on an Original Theme, for violin with piano. Uncharacteristic with the rest of the concert, this bravura expression uses the piano as a “fall guy,” soberly supporting the pyrotechnics of the soloist. Wieniawski, whom some contemporaries experienced as the reincarnation of Nicolò Paganini, was a prodigious musician. His compositions, valued for their flamboyant excitement, endure. While not to everyone’s taste, no young virtuosi can ignore them. Here, Andonian’s charmed and charged presence induced an enthusiastic roar.

I forecast that we will hear much more from both of these intelligent talents. Music for Peace deserves its strong reputation for showcasing many musical luminaries including Soovin Kim, Paul Katz and the late James Buswell; its subsequent concerts featuring rising musicians may likewise identify winners. On January 28th, MFP will host award-winning pianist Aristo Kim.

Julie Ingelfinger, a classically-trained pianist who studied at the Hartt School of Music, Aspen Music Festival and School and at Harvard, enjoys her day jobs as professor of pediatrics at Harvard Medical School, pediatric nephrologist at Mass General Hospital for Children and deputy editor at the New England Journal of Medicine.