The violinist, conductor, teacher, and Grammy-nominated recording artist died recently at 74. James Oliver Buswell IV soloed with the New York Philharmonic Orchestra at age seven. His almost seven-decade career encompassed 100 violin concerti on 5 continents with major orchestras and many of the greatest conductors. According to the Legacy obituary, “… his teaching, chamber music playing, conducting, and numerous recordings, he has touched countless lives. The music world mourns this musical and intellectual giant. Beloved as husband of cellist Carol Ou for 21 years, Buswell’s survivors include Anna Buswell, William Buswell, Joshua Buswell, and Rachel English, as well as four grandchildren, and his brother-in-law, Sam Ou of Boston. 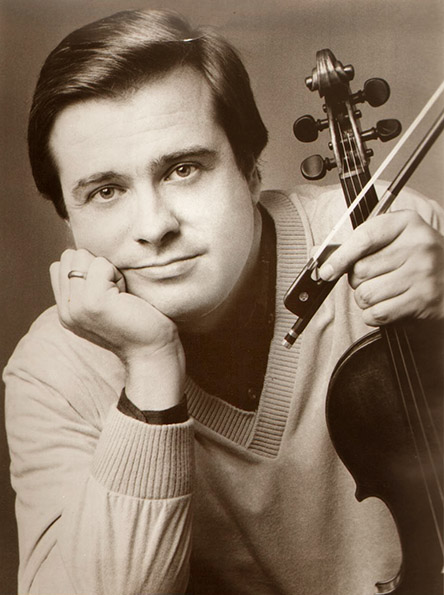 Tribute from Lynn Chang, professor of violin:
I first met Jamie at the Meadowmount School of Music, a summer camp in upstate New York. I was with Daniel Phillips and Dong Suk Kang. We were teenagers at the time, the late 60’s, working with Ivan Galamian. One day Jamie returned to Meadowmount (where he had also studied with Galamian) to give a recital. I remember the Ysaye Sonata No 3 for solo violin (“Ballade”) and some unaccompanied Bach. He played with a full and gorgeously pure tone, with an unusual color palette (thanks mainly to a superb bow arm), imagination, curiosity, power and passion. We were awestruck. In those days, very little speaking was heard from the stage, but Jamie was ahead of his time. Whenever he spoke it was always meaningful, intelligent, witty, often humorous and always eloquently delivered. He exhibited this eloquence in the PBS series “the Stations of Bach,” telling the story of the travels in Bach in Germany throughout his life, and the resulting musical results.

A few years later, collaborated in many chamber music settings, mainly in Boston, Kneisel Hall in Blue Hill, Maine, and with the Chamber Music Society of Lincoln Center. He was always a committed chamber partner—both a great leader and great listener.

Jamie also generously shared his superb gifts as a teacher. His legacy of outstanding violinists, violists and musicians contribute to the arts around the world. It has been a delight to perform with many of them; all that I know share Jamie’s vision and curiosity.

Basketball and baseball were also passions. I remember having vigorous discussions and heated arguments over Major League Baseball and National Basketball teams and players. We enjoyed attending Red Sox games in Fenway Park or Celtics games in the Boston Garden as much as we did playing the Schubert Cello Quintet! Every spring he would invite his entire studio to Fenway Park. Sometimes I would join them.

Jamie loved life, the arts, teaching and family. He continued to make music with his cellist wife until the end. Their children Anna and William are delights.

He has left us too soon. Somewhere, he is still delighting with his endless Schubertian phrases. We miss him very much.