From our far-flung correspondent.

I have spent virtually no time in Chicago in my life—about two weeks over the course of 78 years. So I barely know the city. That changed suddenly last week, when Norway, denying Americans entry to the country out of concern for the still-challenging pandemic, forced my wife and me to cancel a trip we had planned to celebrate our 55th-wedding anniversary. Rather than just stay home, we took an Amtrak sleeper to Chicago for a couple of days, one of which would fall on our anniversary. It would be too early in the season for the Symphony or the Opera, but the great museums, a string of beautiful parks, and extraordinarily interesting architecture could occupy us. So we went. But I ran across a surprising piece of information on Facebook the day before we left. The composer Stacy Garrop, whose work I had twice reviewed at premieres in Boston, was going to debut her Spectacle of Light in the Music of the Baroque concert on September 10th.  The independent ensemble specializes in 18th-century music rather more broadly than its name suggests, because they dip into the Haydn and Mozart, as well as the expected Bach, Handel, Vivaldi, etc.  The distinguished English conductor Jane Glover serves as music director; Benjamin Rivera directs the chorus.

Last year for its planned and (postponed) 50th anniversary, the ensemble decided to commission an orchestral work from a Chicago composer, and the choice fell on Stacy Garrop. It was to appear opposite Handel’s Water Music, a work that has several movements of festive brilliance that would provide an appropriate setting for something new and celebratory. All I knew before getting to the free performance in the Pritzker Pavilion in Millennium Park, was that it would consist of 18th-century music and one piece from the 21st century, the Garrop.

The Pritzker Pavilion, Frank Gehry’s fluid, polished metallic, winged bandshell soars over the stage and some distance out over the audience. Rows of numbered chairs in the forward part of give way to a large grassy expanse sloping upward, where anyone could sit or lie on a blanket, picnic, and listen to the nightly free concerts in warm weather. Over the entire lawn hang high-quality speakers, enveloping an audience of up to10,000 in a reverberant field that creates a very large but acoustically perfect virtual concert hall.

The September 10th concert by Music of the Baroque served two purposes at least. First it was a public announcement that the organization was still in existence after not having performed for 18 months during the Covid-19 shutdown; and this free outdoor program served to advertise the slightly delayed  50th-anniversary season with a range of selections demonstrating the organizations musical strengths and offering samples from the season to come—eight programs, mostly performed twice in different venues, none of them outdoors. And it provided Garrop’s Spectacle of Light in the context for which it was intended, an open-air concert including music from Handel’s Royal Fireworks Music. The show consisted entirely of single movements from (mostly) multi-movement works by Handel, Vivaldi, Bach, Haydn and Mozart, plus a single-movement chamber work for strings by Purcell. 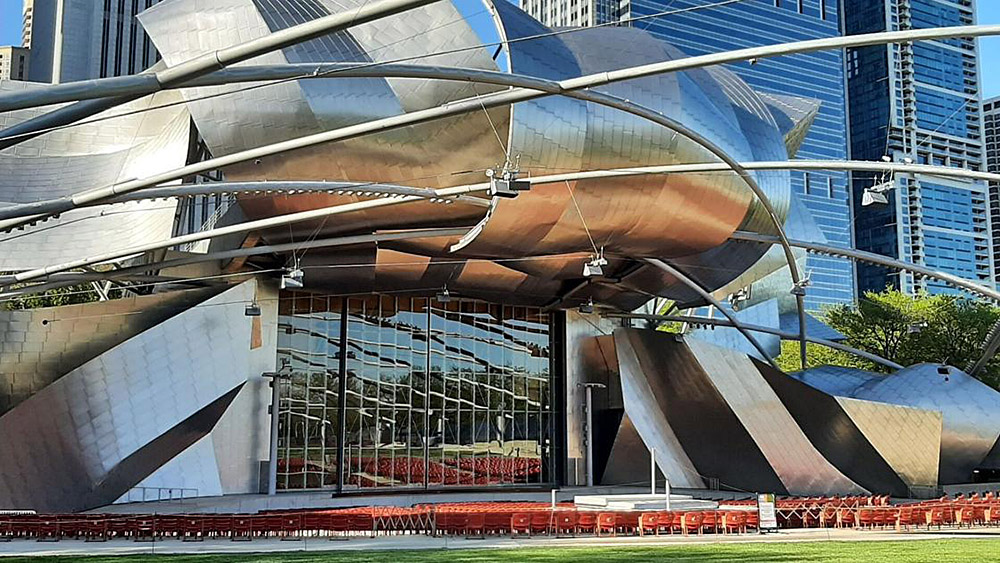 This sort of concert is difficult to review, but I think several points deserve note: The ensemble, roughly the size one would expect for a Mozart symphony, and therefore rather larger than most Baroque scores call for, consisted of first-rate players drawn from a considerable range of area instrumentalists, plus a chorus of roughly thirty-two singers (eight on a part in general). This size group makes possible the performance of just about any piece of music composed in the 18th century, and the program ranged widely: Handel’s Fireworks Music (La Réjouissance), an aria from nis opera Rinaldo (beautifully sung by Katelyn Lee), and the “Hallelujah Chorus” to close; Haydn’s Cello Concerto in C (the finale virtuosically played by a young Chicago woman, Ifetayo Ali-Landing, currently a student at the Colburn School in Los Angeles), and a movement from Mozart’s Oboe Concerto in C, with Anne Bach, the orchestra’s principal oboist, as soloist. There were also several choral numbers. Two movements from works to be performed in full during the main season were given by orchestra and chorus: one from Bach’s Easter Oratorio, and the other from Haydn’s wonderful, but too-rarely-performed, Creation Mass. And the chorus was joined by a special ensemble of students from four different Chicago high schools (clad in uniform t-shirts identifying their connection with Music of the Baroque, but in four different colors to indicate the individual schools. This activity is one of several ways that the organization contributes to musical activity in Chicago schools. The regular chorus, with its youthful adjunct sang Vivaldi’s Gloria early in the evening, and did Handel’s “Hallelujah” chorus to close.

But as fine as all these performances were, and as well-selected to offer a range of types of music from the 18th century, the highlight of the evening came in Garrop’s Spectacle of Light, in all its five and a half wonderful minutes. In planning for the piece, Garrop looked at many images of fireworks to get a sense of the image of celebratory explosions of colored light. She converted these images into orchestral colors both grandiose and delicate. The work begins with a brass- and bass-heavy rhythmic drive that suggests thundering energy as the remainder of the orchestra joins in. It calls for virtuosic players in a texture that sounds like a happy cross between Handel and, say, John Williams at times. The quieter central section  quieter features solo lines and dialogue particularly from the woodwind sections. In Baroque orchestral writing, such passages would normally have been given to paired soloists—two oboes, trumpets, violins, etc.—over a bass line. But Garrop planned her Spectiacle as an homage to Baroque style, not an imitation of it. Gradually the energy builds again. Then comes a surprise ending. In a filmed interview shown on the JumboTron before the concert, Garrop explained she had intended to link it more or less directly to something like the “Réjouissance” of the Fireworks music, so it ends in a surprisingly relaxed close on an incomplete cadence. One expects the next brass-filled movement of something to follow. In this instance, Handel’s most famous chorus held sway.

Though it was intended to be paired with a festive score like Handel’s Fireworks music, on this occasion it worked very effectively just before the concluding “Hallelujah” Chorus.

The extensive audience roundly cheered Garrop; she just might want to create an alternate ending, with a sense of real finality, since its attractive features could well interest conductors who are not planning a Baroque program.